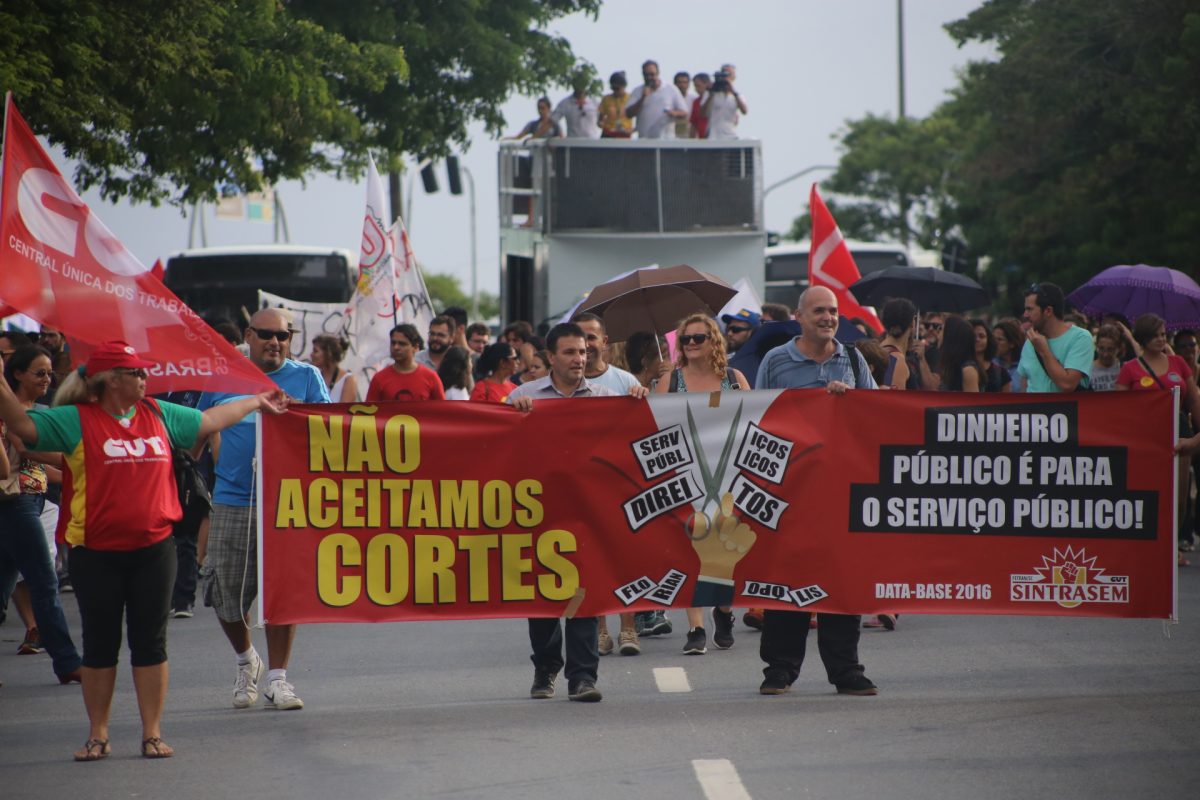 Brazil is in a collective crisis. In 2016, an impeachment -which many likened to a legislative coup – forced leftist president Dilma Rousseff from office. The biggest political corruption scandal in memory continues to unravel, as the country tries to dig itself out of its worst economic crisis since the Great Depression.

The government of Michel Temer has taken the opportunity to push through austerity reforms, which have frozen public spending for the next 20 years. Now, congress is debating an overhaul for the country’s pension and social security system. If approved, the reform would slash benefits and raise the retirement age for federal employees. But many Brazilians aren’t taking it sitting down. Michael Fox has more from Brazil.

It’s a chilly April evening in Southern Brazil. Roughly two dozen public employees are gathered in the capital of the state of Santa Catarina, to discuss how the country’s proposed pension and social security reform could affect them.

They’re upbeat, but nervous, if not for themselves, then for their co-workers.

That’s the case for 55-year-old Anderson Loureiro. He’s been paying into Brazil’s Social Security system for 36 years and he’s looking to retire, which he can. But if the proposed reform had been in place when he began as a social worker in 1981, he would still have another decade left on the job and a smaller pension to expect at the end.

This could be the new reality across Brazil, for those who will enter the workforce, and many already in it.

“At lot of people who started working 20 years ago had an idea of what it would be like when they got to a certain age. And in the middle of the road, the government is changing the rules. What do you do?” Loureiro asks. “I have a son who is 25-years-old. Well, he’s never gonna retire.”

The reform will affect millions of public sector workers and labor unions fear it could lead the way to a piecemeal overhaul of state and local pensions across the country.

The reform is part of a larger government push to roll back the progressive gains achieved under the Workers’ Party that was ripped from office last year in what many here regard as a legislative coup. The ensuing assault on Brazilian labor rights isn’t like anything seen in decades.

“Even during the dictatorship, they took away our right to expression and freedom of speech, and the two-party system, but the attacks against the working class and worker’s rights over labor law were not as intense as they are today,” explains Ana Julia Rodrigues, the president of the state chapter of Brazil’s largest labor federation, the CUT, which has been mobilizing to push back. “Yes, they took away many rights, but not like today.”

Last month, more than a million people marched against the reform in cities across the country. The organizing seems to be paying off. Shortly after the March protests, President Michel Temer announced that the reform would only apply to federal employees. And more concessions have been promised in a move to win over the public and reluctant legislators.

Although Brazil’s conservative Congress is largely in sync with president Temer, pension reform has proved to be complicated. The legislation is unpopular and Temer’s approval rating has fallen to only 10 percent. But powerful proponents are pushing for the reform.

Arthur Maia is the congressional representative in charge of the legislation. He says that future workers won’t be able to cover the cost of retirees and that regulations are necessary to save the system from disaster. It’s an argument that may sound familiar in many countries where social security reform has come up. But unlike in the U.S., the retirement age in Brazil is significantly younger, due to a much lower life expectancy.

“People today retire very early, at age 50 or 55, and they receive their retirement for longer, some times, than they even contributed to the system,” Maia points out. “Naturally social security can’t continue like this.”

But according to lawyer Luis Fernando Silva there is plenty of evidence that the current system is more than sustainable. He’s an adviser to the federal public employees union, Sintrafesci, and he believes the reform is actually a move to gut pensions enough so that workers look for other options.

“This whole reform is just to incentivize privatization without calling it privatization. It doesn’t mention the issue of privatization,” Silva says. “Instead it naturally pushes people away. People are going to migrate into the private sector.”

Regardless, labor is readying for the fight. Nine central labor unions are calling for a national strike on April 28, which they hope will send a strong message to Brasilia. If it is successful, it’ll be the largest nation-wide labor protest in Brazil since 1996.

A vote on the reform is expected within the next six weeks.