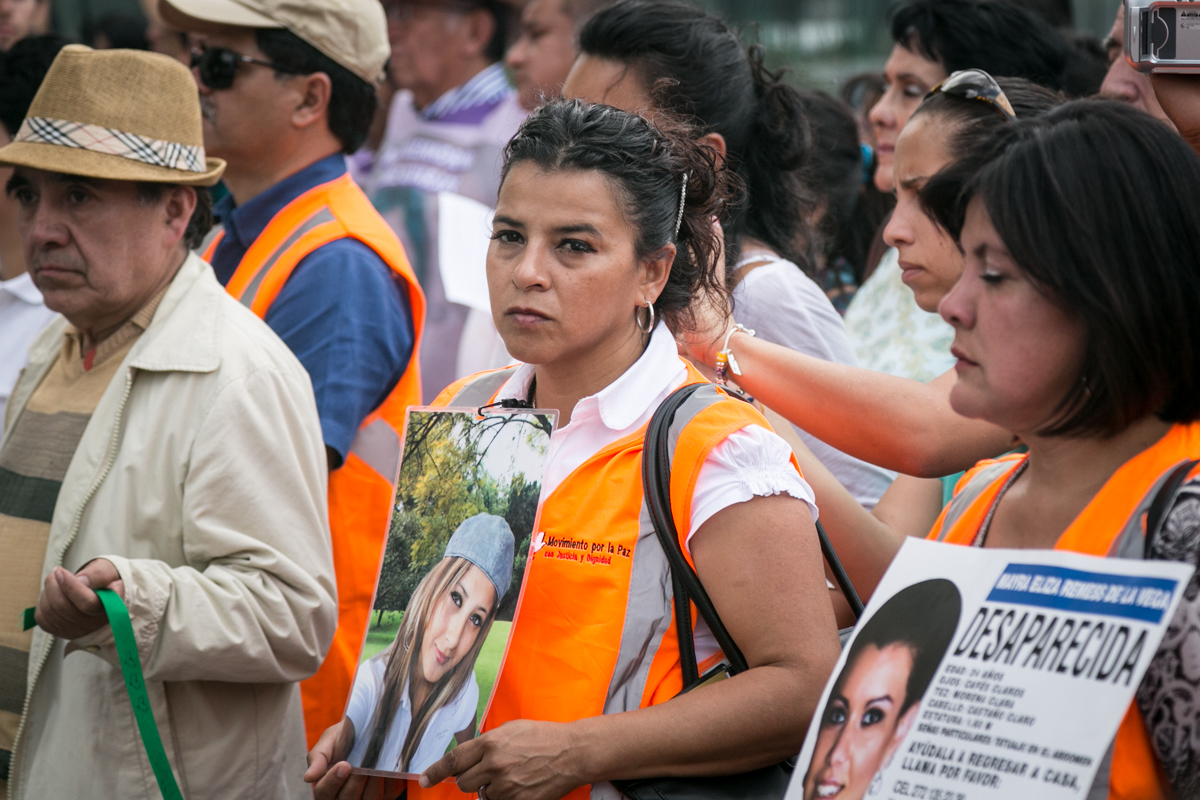 Members of the Movement for Peace with Justice and Dignity (MPJD), relatives of Mexico's drug war victims, gather at the Estela de Luz monument in Mexico City to mark the movement's three year anniversary.

Some of Mexico’s highest profile drug kingpins have been detained or killed by security forces in recent months, and the government is touting a drop in the homicide rate, but many Mexican citizens continue to confront widespread violence, an increase in kidnappings and systemic impunity. Families of drug war victims who were hoping to see concrete policy shifts with the change of administrations a year and a half ago are growing impatient with the lack of progress on tens of thousands of cases of murders and disappearances. Clayton Conn has more from Mexico City.

See photo essay of Drug War victims’ families appropriating a Mexico City monument as a memorial to their loved ones.

Family members of drug war victims bolt memorial plaques of the murdered and disappeared into the concrete of the Estela de Luz monument in Mexico City, protesting what they say is the government’s continued inability to end violence, insecurity and impunity that has gripped the country for over eight years.

An estimated 100,000 Mexicans have been killed since former President Felipe Calderon turned drug prohibition policies into a militarized offensive. The whereabouts of another 26,000 is unknown. They are Mexico’s “disappeared”. Some are believed to have been kidnapped by criminals, others have vanished after being taken into police custody.

Upon assuming the presidency in late 2012, Enrique Peña Nieto vowed a change in strategy without providing concrete details. Top security officials claim homicide rates have fallen since then, but data analysts and independent security experts question the methodology behind the statistics.

Victims’ families have also been critical of the government’s measure to investigate crimes. A Victims Law, signed shortly after Peña Nieto took office, was supposed to provide qualifying families with compensation and to dedicate official resources to investigations, like searching for the disappeared.

Many families of the disappeared echo Genoa’s sentiments, as they are often forced to resort to opening their own private investigations with their own resources. “Everything done in the investigation up until now has been done by me, my family, and by my organization; FUNDEC,” says Rosangelica Garcia, whose son Jaime Garcia disappeared in the state of Coahuila in 2012. “The truth is that we go to the authorities with our investigation already done.”

A common assessment in the victims’ movement is that the government is more interested in projecting a positive public image of national stability and recovery than in actually solving outstanding cases. “They have to stop the charade, they have to stop pretending that it’s not happening, and they’re not doing that,” says Lucia Genoa of authorities in her home state. “They’re sticking to this image that Veracruz is safe, that there’s nothing going on, and it’s not true at all.”

In states like Veracruz, kidnappings and extortion have actually increased since Peña Nieto came into office, according to the government’s own statistics.

These numbers go in tandem with condemning reports by human rights watchdog groups such as Amnesty International or Human Rights Watch, that have warned of increases in femicides, abuses targeting migrants, and attacks against human rights defenders and journalists.

“We don’t know where the State begins and where crime ends and vice versa,” says Javier Sicilia, a poet and magazine columnist who became a prominent spokesperson of the drug war victims’ movement after his son was murdered by cartel members in 2011. He initially participated in high-level talks with the Calderon administration, but has since expressed a loss of faith in the will of the authorities to tackle the issue. “This is because up until now the only thing we as citizens have are the dead, disappeared, a terrible fear and complete distrust of the State.”

Frustration and constant setbacks can wear the moral of those seeking justice for missing and murdered loved ones, but many say that they continue to find strength in the solidarity of the families of other victims. Keeping the ranks of victims from growing even more is perhaps the biggest challenge, but a real shift in official policy doesn’t seem to be a priority.