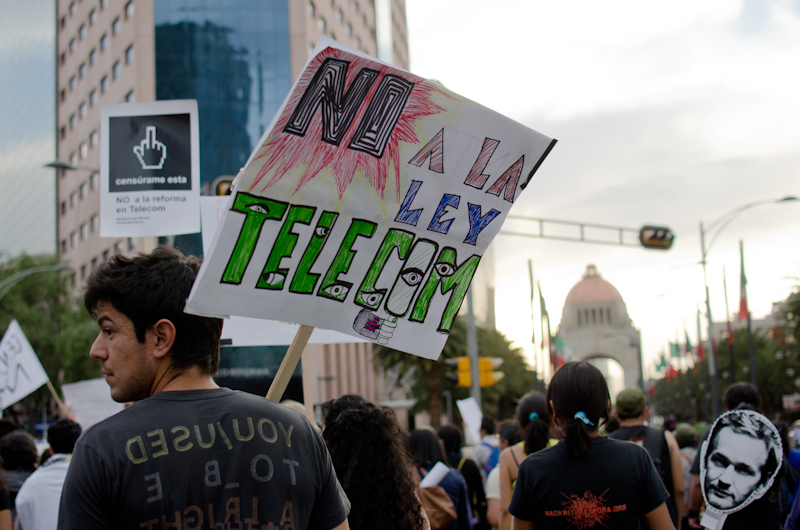 The Telecommunications law would increase the legal surveillance powers of the government, which critics say is especially concerning in a country in which organized crime has infiltrated police agencies and political institutions with impunity.

New telecommunications regulations in Mexico have met opposition online and in the streets. The reform was originally presented as a way to break up telecom monopolies, but critics say it is being used to push through laws which would make lawful the mass surveillance of online activites and make government censorship easy and arbitrary. Activists in Mexico City protested the law Thursday by marching from the headquarters of Televisa – the country’s largest broadcaster – to the Senate. At the march, FSRN’s Andalusia Knoll spoke with Mexican digital rights activist Luis Fernando Garcia.

FSRN: What do you consider to be the most troubling aspects of the Telecommunications Law?

Luis Fernando Garcia: Well, in our view, the censorship that it allows on the internet. Also, it puts responsibility on – third party liability as it is known – in which companies are made to make decisions on legality of the content that is generated by the users and usually, they abuse this power and they censor things that they shouldn’t.

Also, we are worried about net neutrality provisions which would basically make the internet like TV, you would have to pay for special services like streaming or video games. And it would destroy the basic consensus about the internet; that everyone is equal and everyone can publish everything and traffic will be dealt equally without regard of if it’s a big company or if it’s a small web page that is just emerging.

Also, we’re very, very worried about provisions regarding surveillance. There is a big amplification of the powers put on national security agencies to basically gather and access a whole range of information, of private information, of citizens without any safeguards; no judicial warrant, no transparency, no independent supervision. And we see this as a trend of the government as an attempt to control the internet as a means for political mobilization for political opposition. We see an attempt to curtail the internet as a political force that is in opposition to the government.

For more, listen to the audio file. 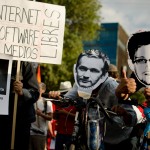 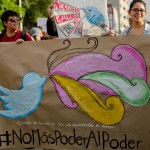 Marching under the banner “No Mas Poder al Poder” criticize a law they say will make the country’s telecom giants and security agencies even more powerful. 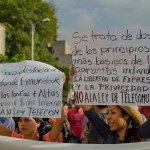 Mexico has some of the most expensive telephone and Internet services in the world – something the law was supposed to correct – but activists say it legalizes extensive online surveillance and censorship. 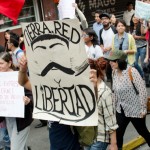 Emiliano Zapata was a revolutionary leader who fought for land and liberty for Mexico’s farmers.  In a sign which reads “Land, Internet and Liberty,” open internet advocates appropriated his image during the march which fell on the anniversary of his assassination. 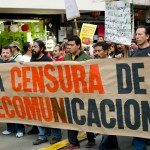 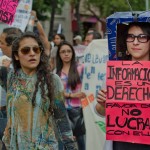 Under the new legislation citizens may have to pay for access to certain Internet sites and services.  This protestor’s sign reads, “information is a right, don’t use it for profit.” 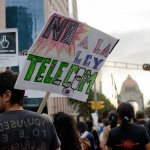 The Telecommunications law would increase the legal surveillance powers of the government, which critics say is especially concerning in a country in which organized crime has infiltrated police agencies and political institutions with impunity.