Read or listen to Sam Cowie’s report on how a Brazilian movement has turned an abandoned government office into housing for poor, working families in São Paulo. (Photo credit: Sam Cowie) 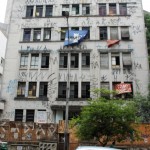 Occupation Martins Fontes is located about half a mile from São Paulo’s financial district. Around 50 families – some 150 people – live here, including cooks, teachers, cleaners, students and several children. 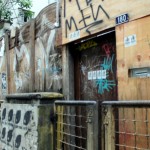 The former government building was abandoned for 20 years and was occupied in 2011. There are rules in the building: no drugs, no alcohol, no fighting. Anyone caught breaking the rules is expelled. 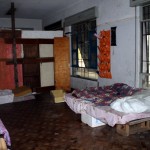 One of the makeshift rooms in the occupation. Electricity in the building doesn’t come on until 7:30pm. The rooms are occupied by families whose combined monthly income is less than US$800. 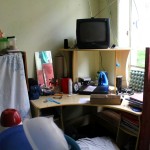 Most of the rooms have gas stoves, TV’s and/or laptops. However, none have running water. There are two bathrooms in the building, both located on the first floor. 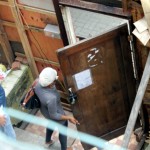 Two residents leave for work. Central São Paulo properties have risen in value by nearly 200% since 2008, leading to an increase in occupied buildings.