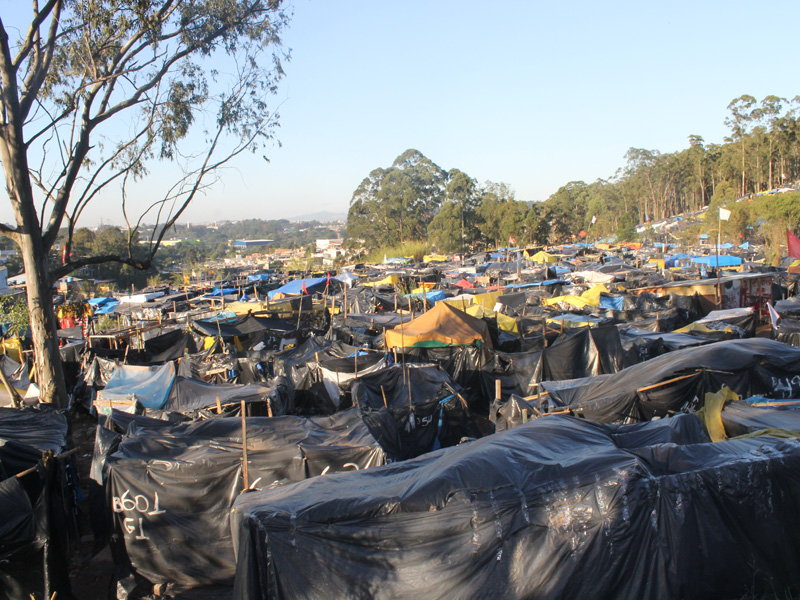 A view of the camp from a high vantage point. Most of the occupiers came to the camp fleeing from soaring rent prices. Some say they were homeless.

The World Cup continues in Brazil, but for 5000 homeless workers in São Paulo, there is a different reason to celebrate. Since May, the workers have occupied a space of land less than three miles from the newly built Itaquerão (Ita-ke- rao) stadium where the World Cup opening match was played. Recently, the local government and the landowner reached an agreement allowing the land to be converted into public housing units. From São Paulo, Sam Cowie reports.

São Paulo’s ‘Occupacao Copa do Povo’ – meaning ‘The People’s Cup’ is a tent city-style occupation that sits on a hillside deep in the city’s working class East zone.

It resembles a refugee camp. In some ways, that’s what it is. The camp is made up of over 1000 crude tents, mostly made from wood and tarps. The majority of the camp’s occupiers say they were priced out of their homes due to rising real estate speculation. Some say that before they came to the camp, they were living on the street.

A wooden shack at the camp’s entrance is used as an office where occupiers can register and borrow tools to build their tents. It bears the red flag of Brazil’s homeless workers movement, MTST, which stands for ‘Movimento dos Trabalhadores Sem-Teto.’

Earlier this month, just before the start of the World Cup games, the São Paulo state government announced that it would build 2000 public housing units for the occupiers on the camp site.

“Our fight is for dignified housing,” says 44-year-old Dez Reias, one of the MTST’s camp coordinators. “Rent prices have risen, especially with the arrival of the World Cup. The cost of living has also risen, making it even more difficult. So we opened this camp here on the city’s outskirts, where the poorest people live. These people couldn’t afford to pay rent anymore and so they came here. There are families and children living inside the camp, too.

The land where ‘Occupacao Copa do Povo’ sits is privately owned and long abandoned. Women who work as the camp’s cooks are washing pots and pans. There is only one source of running water and one toilet, built from salvaged wood.

The camp is split into 8 groups. Each group has a kitchen with a gas stove. Here, the poorest families can get a free basic meal of rice, beans and vegetables. Food donations come from occupiers who are better off.

Nineteen-year-old Alberto Costa says that he cried with joy when he learned of the government’s announcement to provide public housing units to the occupiers. His girlfriend is pregnant with their first child. She is currently living at a relative’s house.

“Public housing here practically doesn’t exist,” says Cleide Conceição, a 63-year-old pensioner who came to the camp after she saw it on TV in early May. She was living at a friend’s house because she couldn’t afford to pay rent. She now lives at the camp with three great grandchildren, a grandchild and her son-in-law. “Decent living conditions are only for those who earn five or ten times the minimum wage. If you only earn the minimum wage, it’s like you have no right to dignity.”

On Saturday, MTST set up another camp in the Morumbi region, an upmarket part of the city’s South Zone. Local media reported that 600 tents were built in 12 hours.

With a real estate bubble inflating rental costs across São Paulo, more low income workers are leaving rented accommodation and taking the risk of living in camps or squatted buildings.

Housing costs have risen at rates that far outpace meager increases to working class wages. This has fueled the MTST to increase their occupations of unused land. And the situation has now become too big for city planners to ignore.

In the latest Master plan of the city of São Paulo, City Hall is considering the incorporation of four more MTST camps into São Paulo, a move which would benefit a total of 13,000 families. 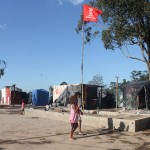 Entrance to ‘The People’s Cup Occupation.’ Five thousand people have occupied the site since early May. The camp is three miles from the newly-built Itaquerão stadium where the World Cup opening match was played. 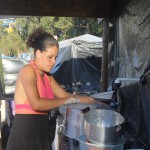 The only source of running water in the camp. This woman washes pots and pans before dinner. The camp is split into 8 groups. Each group has a kitchen. 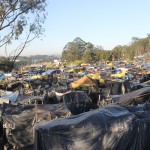 A view of the camp from a high vantage point. Most of the occupiers came to the camp fleeing from soaring rent prices. Some say they were homeless. 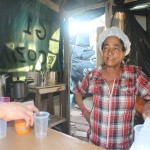 View inside one of the kitchens. Each cook prepares basic meals of rice beans and vegetables for the most vulnerable occupiers. Food donations are made by occupiers who are better off. 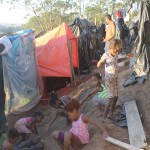 Kids play in the makeshift alleys between the tents. The site will be converted into 2000 public housing units after an agreement was reached between the landowner and local government.