The independent press and organized protests in Russia have faced restrictions during the current administration of President Vladimir Putin. The intersection of these two issues was visible on the streets of St. Petersburg over the weekend when demonstrators came out to protest government propaganda about events in Ukraine and pressure on independent media, including a new law which allows federal prosecutors to shut down online media outlets without a court order.

When protests do not have permission from local authorities, its participants use a tactic known as “single protester pickets” to avoid arrest. Demonstrators, standing at least 160 feet apart, hold signs to express their opinion. Ekaterina Danilova took these photographs of an unsanctioned protest against censorship in Russia. Read and listen to her report. 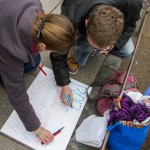 Protesters Alena and Kirill make signs in which they compare Russia in 2014 with George Orwell’s dystopian novel “1984”. 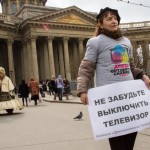 The activist in a t-shirt supporting the independent Dozhd TV channel is holding a banner saying, “Don’t forget to turn off the television”. 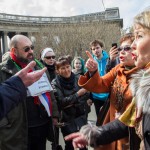 Supporters of the annexation of Crimea, right, are arguing with protesters, left. 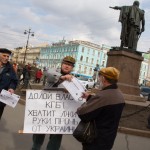 One of the protesters, Konstantin Ershov from the “Republican Union” group, distributes an opposition newspaper. The banner says “Down with the power of the KGB! Enough lies! Hands off Ukraine”. Many of the protesters were older people and remember censorship restrictions under the Soviet era. 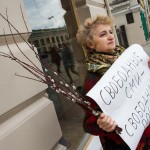 At the event, protesters stood 50 meters apart so as not to violate the law, because the rally was not sanctioned by the local government. The banner says, “Free media – free Russia”. 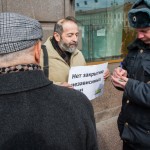 A police officer takes down the information of Boris Vishnevskiy, a representative in the St. Petersburg Legislative Assembly, who came to support independent journalists and freedom of speech. The banner says, “No to closing independent media”. 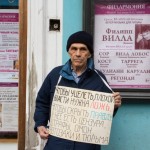 Vitold Zalesskiy, an 85-year-old member of the “Solidarity” movement and the NGO “Memorial”, is holding a sign which says, “Bad power needs to lie to survive. To hide the truth, it has censorship, penalties, special police forces, police vans and prison”.