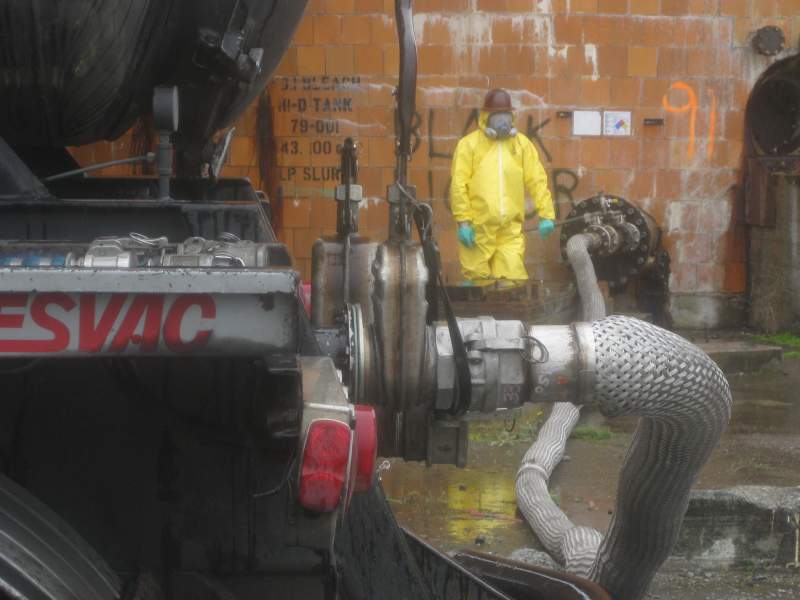 An emergency hazardous materials clean-up is under way in Humboldt County, California where millions of gallons of highly corrosive chemicals are stored in unstable tanks that are leaking. Daniel Mintz of KMUD radio reports that the chemicals are being removed from a vacated pulp mill located on the shores of Humboldt Bay.

Last November, the U.S. Environmental Protection Agency, or EPA, declared the mill site an imminent and substantial threat to both the environment of Humboldt Bay and to human health. The most intense danger is the presence of up to four million gallons of extremely corrosive pulping liquors—chemicals that were used to extract pulp from wood chips.

The pulp liquors are stored in five cement silo tanks and five steel tanks that date back to the mid-1960s, when the mill was built. The tanks are leaking, have been infiltrated by rainwater and are in danger of structural failure.

In addition to being an ecologically sensitive area, Humboldt Bay is the hub of a multimillion dollar oyster industry.  “There would be disastrous effects if one of the storage tanks failed. And that could happen at any time,” said EPA Emergency Response Coordinator Steve Calanog, adding “Normally in an operating facility that has bulk storage containers of this size, there’s some industry standard of periodic integrity testing to ensure that they can withstand the pressures of storing the volumes that they do store. But there hasn’t been any integrity testing on these tanks in decades as far as I can tell. Earthquakes would certainly be a contributing factor to causing a tank failure but it is quite possible that the tanks could catastrophically fail on their own.”

A working mill in Longview, Washington has agreed to take the caustic chemical liquor and will reuse it. But plans to transport the hazardous materials by barge were put on hold when the port where the chemicals would be offloaded demanded nearly a million dollars of upgrades.

Jack Crider is the CEO of the Humboldt County Harbor District.  He said  “once we got down to the nitty gritty of docking the barge in Longview, the costs were way too high and we ended up with about 2.5 million dollars for the barging versus about 1.6 million dollars for the trucks.” Crider continued  ” …  we’ll start with trucks because we need to get the product moving but we’re still looking for barges. That probably is a safer and more efficient way to do it and we’re still negotiating with Longview on the pricing but we have to start.”

The urgency to begin the clean-up grew after an offshore earthquake last March highlighted seismic risks.

When the first of up to 800 truckloads of the mill’s hazardous chemicals were loaded for transport to the Longview mill, the EPA held a press conference at the mill site.

According to Jared Blumenfeld, the EPA’s regional administrator,  “this was a disaster that miraculously did not happen.” Blumenfeld went on to say the agency doesn’t see situations at this magnitude every day. “We don’t see this every day in California and we don’t see this every day on the West Coast. This is really an enormous mess – absolutely enormous. So, three million gallons of the black liquor – that stuff is highly corrosive, it has a PH of 13 or 14, which is the highest PH you can get. There’s 10,000 gallons of sulfuric acid. There’s 10,000 tons — 10,000 tons — of highly corrosive sludge. Unfortunately, there was a problem of containment. The corrosive material was meant to be in metal tanks. It ended up in cement tanks. Those cement tanks have begun to corrode and some of them are to the brim. Literally, with the rain today, if we weren’t pumping it out, they would overflow.”

The removal process will take up to eight months.  Now the mill property is owned by the Harbor District, which bought it for one dollar and an agreement to take on its liabilities.

The mill’s history is over, but the site could enter a new phase of use. If the Harbor District’s plans are realized, an aquaculture business park, renewable energy research facility and shipping hub will be developed on the site.

The clean-up will cost about 4 million dollars. A one-and-a-quarter million dollar loan has been advanced by Coast Seafoods Company, a lynchpin of the local oyster production industry. The debt will be repaid through the sale of the mill’s boiler and other equipment. Funding the clean-up is otherwise uncertain.

The EPA may take enforcement action., but collecting penalties from insolvent mill companies would be difficult.