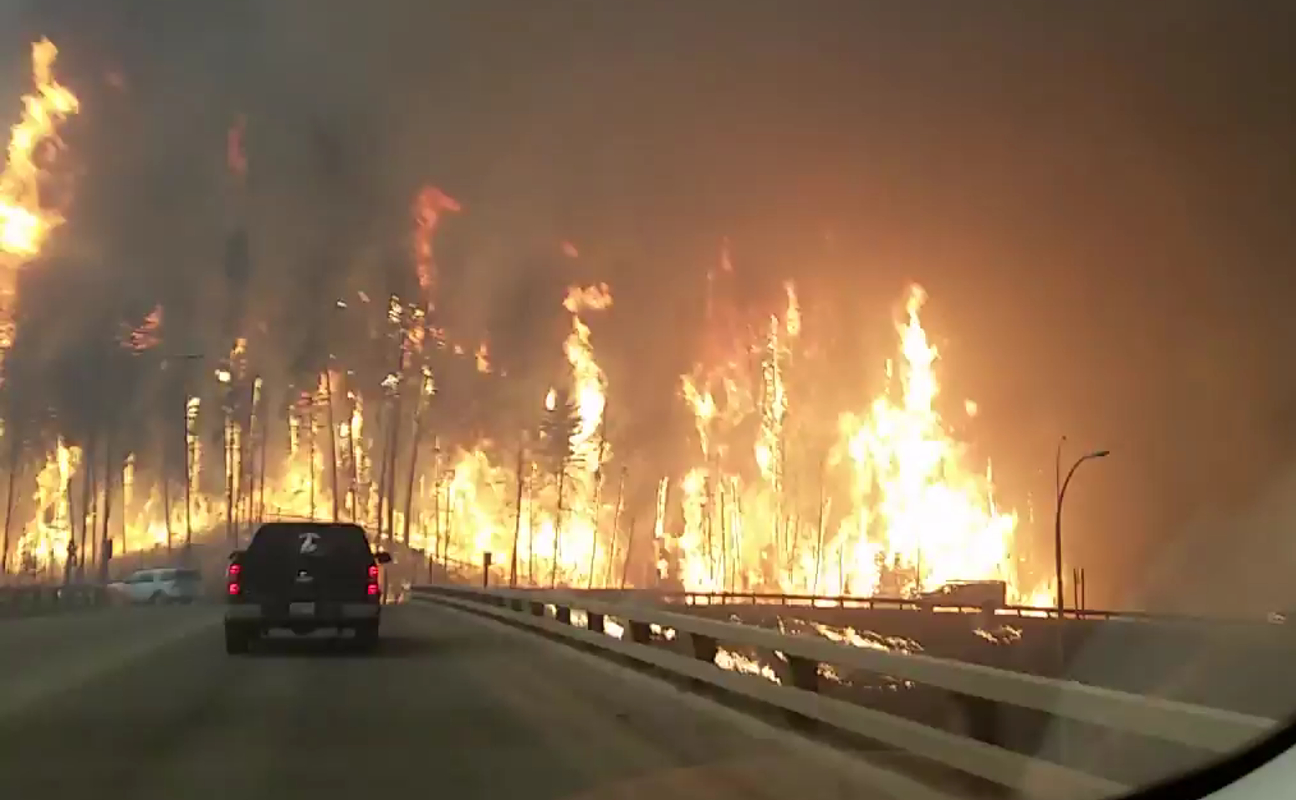 A massive wildfire in the tar sands region of Alberta, Canada continues to rage. The entire town of Fort McMurray, with more than 80,000 residents, is already emptied. Extremely hot and dry conditions led to a more than eight-fold increase in the size of the fire since the evacuation order Tuesday afternoon. The fire has now slowed somewhat, but continues to spread.  Friday, emergency officials began moving thousands of the evacuees again, with airlifts and police-led convoys back through the fire ravaged town they fled earlier in the week. Samantha Power reports from Edmonton.

Over 1100 firefighters are on the ground and 145 helicopters in the air to fight a wildfire that has decimated a swath of northern Alberta. The fire spread quickly through 85 000 hectares, that’s more than 210,000 acres, in and around Fort McMurray, the town closest to the Alberta oil sands.

The massive fire has forced oil sands operations in the area to either slow down or shut down. Suncor’s base operating plant has temporarily suspended operations to ensure worker safety. The plant, located 15 miles north of Fort McMurray,  is not believed to be in danger of the south-moving fire, but its work camps have become home to evacuees.  Many of the oil sands deposits themselves are also north of the fire.

The numbers vary according to the source and remain in a constant state of flux while the fire rages. The office of the provincial government estimated Thursday evening that over 25,000 evacuees are being housed in work camps north of Fort McMurray , a town with just over 80 thousand people before the fire.

The nearby Fort McKay First Nation has seen a rapid influx of over 5000 evacuees in a town that is normally home to 700.

Mikisew Cree First Nation Chief Steve Courtoreille says Fort McKay and Fort Chipewyan are safe and will continue to welcome evacuees trying to get off the highway, but that the communities also need to track down their own members who lived and worked in the Fort McMurray area.

“So many people have been displaced in Fort McMurray that are my First Nation members,” he told FSRN. “They have no intention of going back. Their homes have been destroyed. Some have left with just the clothing on their backs.”

Courtoreille says he would like to see a commitment from the province guaranteeing housing for all displaced First Nation members.

Premier Rachel Notley, Alberta’s provincial governor, admits it will take more than a few days for the assessment of need to even begin.

For now, it’s about connecting people with services. Fifteen-hundred cars are still spread out north of Fort McMurray. On Friday, the RCMP national police force began a convoy to escort them south, 50 at a time, to the city of Edmonton.