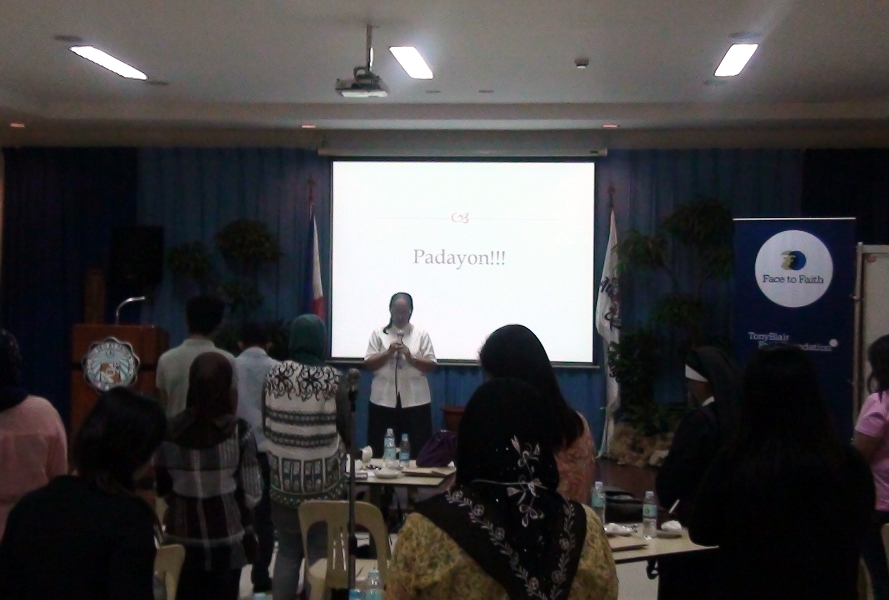 A landmark peace agreement finalized late last month in the Philippines established a new autonomous region in part of the south where Muslims are a majority in a mainly Catholic nation. The pact closes a chapter on decades of tension and hostilities between Christians and Muslims in the region. The fighting cost an estimated 120,000 lives over more than 40 years. One of the lesser-known actors in the peace process is an interfaith organization known as the Silsilah Dialogue Movement. Madonna Virola visited the group in Mindanao Island and files this report.

The Silsilah Dialogue Movement’s Harmony Village lies about six miles outside of Zamboanga City on a 35 acre property of low rolling hills and woodlands. It is here that the interfaith movement’s beliefs of peaceful co-existence and respect for the environment are put into practice.

The organization’s president Minda Sano points out the common facilities, which include classrooms, a media center and an on-site holistic health clinic. Throughout the village, signs remind people to observe silence and pray.

While the scene is tranquil and refreshing, the movement itself formed in the context of tension and violence.

Silsilah was founded in 1984 by Italian missionary priest Sebastian D’Ambra, who was assigned to the southern Philippines in the late 1970s. It was around the time that a separatist insurgency became active, straining relations between local communities.

”I observed how the relations between Muslim, Christian and also the indigenous people was not really dialogical [sic],” says D’Ambra. “My mission was in Siocon, it’s a  remote area. I started to take care of refugees, to visit people. I need to be like a bridge between Muslims and Christians. I became negotiator for MNLF  because they requested me, so going to the forests, meeting the rebels, military and find solutions.”

The MNLF, or Moro National Liberation Front, is a guerrilla army of Muslim separatists which began fighting for independence from the Christian-dominated government four decades ago. The conflict has claimed around 120 thousand lives.

During his time in the region, Father D’Ambra earned the respect of several Muslim rebels and was asked to serve as a go-between with area Christians. He says groups of people willing to find common ground are key to solving complex social problems.

“It is difficult to achieve what we wish to happen, but if we find many people work for the common good, it will be something that will change society,” he says, adding that one of Silsilah’s goals is to promote the culture of dialogue. “It radically invites people to have a personal spiritual transformation and to bring this into society to have social transformation. If we are many who work in this way and this experience, we can contagious spirit in a positive way in the society.”

The work hasn’t been easy or without its drawbacks.

Father D’Ambra was threatened shortly after the murder of his friend and fellow missionary, Italian priest Salvatore Carzedda in 1992. Silsillah Dialogue Movement members have also faced violence and kidnappings in the context of their work in polarized environments.

Despite the challenges, the movement has grown and spread beyond the Mindanao region, where Harmony Villages for community services and livelihood trainings have been built.

One of the movement’s villages is the 11-year-old Padayon Center in the heart of Zamboanga City. Virginia Montebon, the village’s coordinator, says last  September the group  had to evacuate the property when a faction of Muslim rebels from the Moro National Liberation Front marched into the city and raised their flag to proclaim an independent state.

Rebels used Silsilah’s center and other area buildings as barracks and for holding hostages. The activity building was burned down. The walls of the remaining buildings are scarred by bullet holes. The children’s learning sessions were moved to an emergency shelter for evacuees.

An estimated 100,000 people fled their homes during major fighting last September. More than 10,000 houses were burned in nine villages.

The fighting has since subsided and the MNLF separatists, the government and other stakeholders signed a comprehensive peace agreement on March 27th. Players in the peace negotiations said the Silsilah Dialogue Movement was key to the success.

On behalf of the Silsilah Dialogue Movement, Father D’Ambra recently accepted the prestigious Goi Peace Award, a Japanese prize previously given to Microsoft founder Bill Gates and former president of Costa Rica. Silsilah has received numerous other awards for the group’s contribution to peace efforts.

The 71-year-old Father D’Ambra says he doesn’t plan to retire any time soon because he believes that he still has more work to do. But he hopes the young people Silsilah has trained will continue the journey toward peace.

Among them is 35-year-old Rasma Sappan who is now on staff of Silsilah. “If not for the scholarship from Silsilah since I was a child, I would not be a social worker,” says Sappan, who grew up in poverty on the small island of Santa Cruz. “I also evacuated from last year’s war but we continue to do our work like care for orphans of parents who were victims of violence, the inmates at Zamboanga jail and help heal traumas of survivors of Zamboanga crisis.”

As for the peace process, the Philippine Congress must pass a “basic law” to create the political framework for the autonomous Muslim-majority region, which will be called Bangsamoro.

President Benigno Aquino wants the legislation ready for full implementation before he ends his term in 2016.