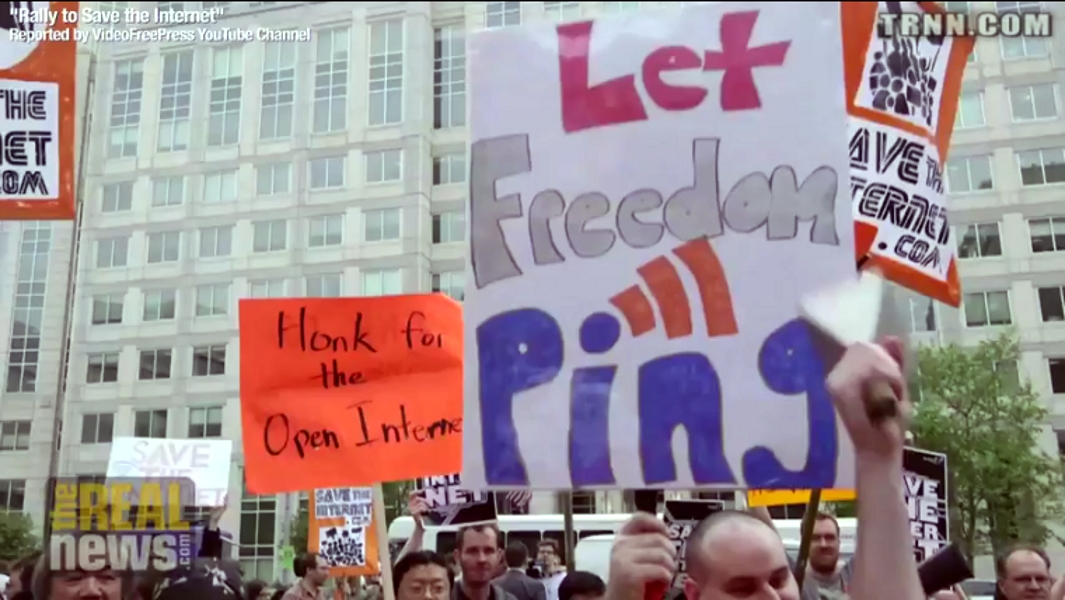 The Federal Communications Commission held a closely-watched vote Thursday that could affect the future of equal access to the internet and allow internet service providers to charge more for faster content delivery.  In partnership with The Real News, Jaisal Noor reports from Washington.

Over several disruptions, the FCC voted Thursday to move ahead with a proposal FCC chairman Tom Wheeler says will preserve net neutrality. Digital rights activists say it will do the opposite.

What triggered public and congressional outcry ahead of the meeting is a provision in the proposed rule that will allow providers to charge more for faster content distribution, a so-called “internet fast lane.”

“We start with a simple obvious premise: Protecting the open internet is important for both consumers and economic growth,” said FCC Chairman Wheeler, a former telecom lobbyist. Wheeler says his proposal will balance the interests of the public and those of internet service providers. “We are dedicated to protecting and preserving the an open internet.”

Digital rights advocates argue that by going ahead with the plan as written, the FCC will actually create a two-tiered system which favors telecom giants and media conglomerates.

“The Chairman of the FCC is arguing that he can protect the open internet via these rules,” said Craig Aaron, president of the open internet advocacy group, Free Press, adding “I don’t agree with him. He spoke passionately about the open internet and how important it is to him during his statement today. Unfortunately, the reality of what’s in the rules doesn’t match up with the rhetoric. “

Aaron says the most effective way to preserve net neutrality is by reclassifying broadband as a public utility, which would grant the agency greater regulatory powers.

“The FCC faced a choice, they faced two paths they could do what’s called reclassify broadband under the communications act restoring the legal authority that they themselves gave up during the Bush administration or they take a could convoluted, confusing approach that they chose to take,” Aaron explained. “So we are really urging them to go back and reverse the mistakes of the past and assert their clear authority under the law to protect internet users.”

Another criticism of the proposed rule is that two-tiered access will disproportionately impact the low-income population and people of color.

Fight for the Future’s campaign manager Kevin Huang camped out in front of the FCC headquarters for the past week ahead of Thursdays meeting.

“I come from a background of community organizing in the San Francisco Bay Area, so I personally know that folks who for example don’t have the resources to pay specifically people of color, and people of low socioeconomic status are going to be especially affected if the ISPs win this fight to create a slow lane for the internet,” Huang said.

Thursday’s vote opened a four month public comment period. Advocates say their next step is to rally broad public participation from citizens who want to preserve the egalitarian nature of the internet.

This report was produced in partnership with TheRealNews.com.  See the video version here.