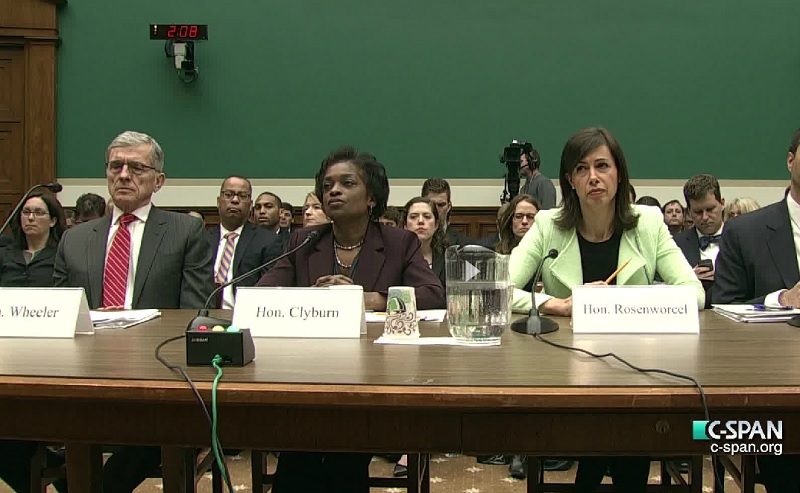 House Republicans got their chance to grill Federal Communications Commission Chair Tom Wheeler this week, after the agency voted in favor of regulating the internet as a utility. Internet freedom advocates celebrated the FCC’s move, calling it the best way to codify net neutrality.

Congressional committees, like the one headed by House Oversight Chairman Jason Chaffetz, are questioning the FCC about meetings at the White House and transparency. But Democratic members shot back with their own accusations. Anthony J. Rivera has the story from Capitol Hill.

For a few months now, Republicans in Congress have accused the FCC of colluding with the White House to regulate the Internet under Title II of the federal Communication Act of 1934 – provisions for common carrier services. On Tuesday, House Oversight Committee Chairman Jason Chaffetz and other Republicans got their chance to question FCC chairman Tom Wheeler.

“We invited commissioner Wheeler to come before us and he refused,” Chaffetz said. “Didn’t have any problem meeting at the White House but did have a problem coming before Congress.”

The committee examined emails and records they say suggests the FCC acted on instructions from the White House, something Wheeler denies.

“I guess the point is chairman, you met with them multiple times,” Chaffetz said to Wheeler during Tuesday’s hearing. “They came to visit you, you went to visit them. But we invite you to come in an open… and you refuse. We asked you to send some documents. You didn’t send us a single one. And that double standard is very troubling for us. I need to move on.”

On a testy exchange, FCC Chairman Tom Wheeler said he had agreed to come, but only had a week’s notice and was dealing with requests from other committees, something Chaffetz publicly doubted.

Ahead of the vote, the FCC received a record-breaking 3.7 million comments from the public, overwhelmingly in favor of the rule.

Legislation in the House and the Senate seeks to address concerns about so-called internet fast lanes while rolling back what the FCC has already approved. But congressional observers agree both pieces of legislation have a ways to go before achieving Democratic support. House Republicans, like Florida’s Ron DeSantis, bemoan the FCC’s net neutrality rules as another government take-over.

“It’s going to be more,” DeSantis warns. “It’s going to metastasize. And government’s going to be able to get involved in other aspects of this and I wish the public would have had more input. I know that this is going to be contested obviously in the courts and here in the Congress. I’m out of time and I’ll yield back.”

Another House Committee, Energy and Commerce, held a hearing later in the week with all five members of the FCC also examining their decision. And at least one other hearing scheduled for next week, comes as a new bill takes aim at the FCC’s budget. Republicans hope to use the power of the purse to slow down what in their view is any additional overreach the commission wishes to take.

But it seems net neutrality advocates have the upper hand, for now.