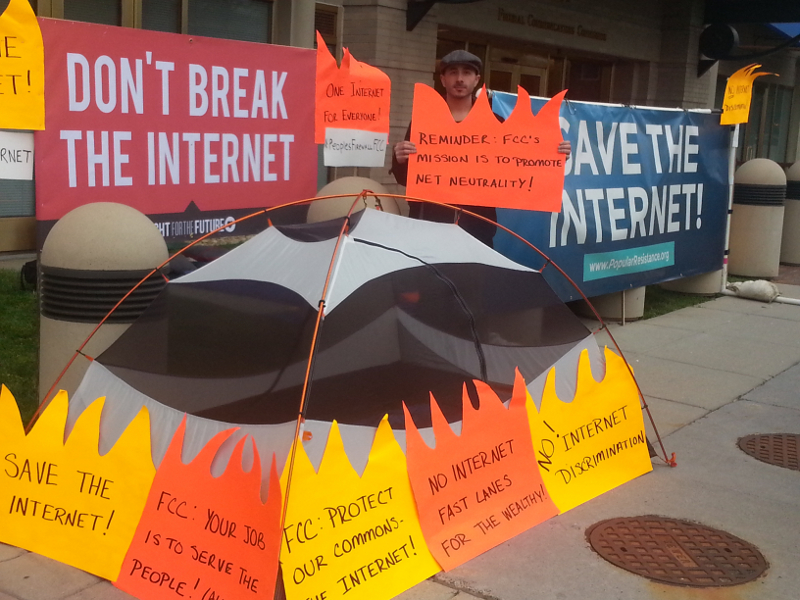 Photo credit: Fight for the Future

The Federal Communications Commission is just days away from voting on a proposal that could fundamentally change Internet access across the United States. Though the public has not yet seen the text of the agency chair’s so-called Open Internet rule, his fellow commissioners, members of Congress and local activists are speaking out against it. Those signing online petitions and physically occupying the entrance of the FCC headquarters say the rule would undermine the egalitarian principles of the Internet, and threaten the future of grassroots organizing and independent media. In Washington, DC, Alice Ollstein has the details.

After weeks of pressure from lawmakers, activists and tech corporations FCC Chair Tom Wheeler revised the proposal he will make public during a vote on May 15th. According to the Wall Street Journal, the new version would prohibit providers like Comcast and Verizon from intentionally blocking or slowing down sites they don’t like, but would allow web corporations to pay service providers to get their content to users faster.

Former FCC Commissioner Michael Copps says it means, “we’re going to end up with an Internet for the 1 percent, and slow lanes for the rest of us, the 99 percent.” He traces the problem dates back to 2002, when the agency considered classifying broadband Internet as a core telecommunications service, like phone lines. After heavy lobbying from corporations, the commission chose instead to deem it an “information service” leaving it in a legal grey area subject to less regulation.

“We’ve had now over a dozen years where we haven’t been exercising oversight of broadband, and as a result, we’ve got also-ran status among the nations of the world on getting broadband out to our people,” says Copps, who served at the FCC for 11 years. “We have not guaranteed an open internet, and we have allowed it to go down the road of gatekeeping and special interest control. What it’s really all about is, let’s call communications, communications.”

Because of that definition, Verizon was able to win a ruling in federal court in January striking down the FCC standard saying all web content must be treated equally. Now, both Copps and the small band of protesters camped outside the Federal Communications Building in Southwest Washington, DC are calling on the agency to reclassify broadband Internet as a “common carrier.”

Local activist Kevin Zeese, who runs an independent news blog, says that’s the only way to insure those who can’t afford to pay the premium can still have their voices heard online. “Just like you have on cable TV, premium channels, very likely we’ll see the same kind of thing on the Internet,” he told FSRN. Zeese worries the proposed rule would make it more difficult for people to access the stories that aren’t being covered by the mainstream press. “Big corporations will be able to afford the fast service, but you’ll see nonprofits, independent media and citizens’ media not having that kind of funding, so they’ll be much slower.” He warns this will ultimately lead to further consolidation of “a handful of companies owning the corporate media and putting out the corporate message.”

Earlier this month, 11 Senators wrote to the FCC expressing similar concerns, warning that sanctioning paid prioritization “would allow discrimination and irrevocably change the Internet as we know it.” One of the letter’s lead authors, Oregon Democrat Ron Wyden, also recorded a video urging his constituents to contact the FCC before they vote. In the video, Wyden calls the open internet, “our town square, our economy and our future.”

Though the vote on the rule is scheduled for May 15th, two of the agency’s five commissioners have called for a postponement of at least a month, to allow for more public input and education. A third commissioner, Mignon Clyburn, said she opposes all “pay for priority” models like the one proposed.

Many equal Internet advocates like former Commissioner Copps say even though a delay could work in activists’ favor, settling the matter soon would benefit the public. “We need to decide as a country whether we’re going to allow gatekeepers to favor certain content, to degrade content,” he told FSRN by phone. “It’s going to set the direction and course of the Internet for years and years to come, perhaps for the better part of a generation.”

Copps warned that the question is particularly pressing in the context of the pending merger between Comcast and Time Warner Cable, which could create an incentive for the companies that provide internet service to favor the web content they themselves produce.

On May 15th, activists from across the country plan to rally outside the FCC, and tens of thousands have weighed in online. But Martha Allen with the Women’s Institute for Freedom of the Press said more public involvement is needed in order to have an impact. “It’s not assured we will have the Internet be open to all on an equal basis where some will be in the fast lane—corporations able to go faster,” she commented after hours of handing out fliers outside of the FCC, adding “we’re dependent on them, so we pay higher fees and organizations like mine, who get information out through our website and social media, we won’t reach as many people.” Allen wondered aloud whether many people take net neutrality for granted, and whether they would be outraged if they better understood the implications of the upcoming vote. “If you’re too slow, people move on to other things.”

Thursday’s hearing will be open to the public to watch in person at the FCC or over a livestream on the agency’s website. If the “notice of proposed rulemaking” is approved, the draft net neutrality text will be open for several months of public comment before a final vote on the rule.