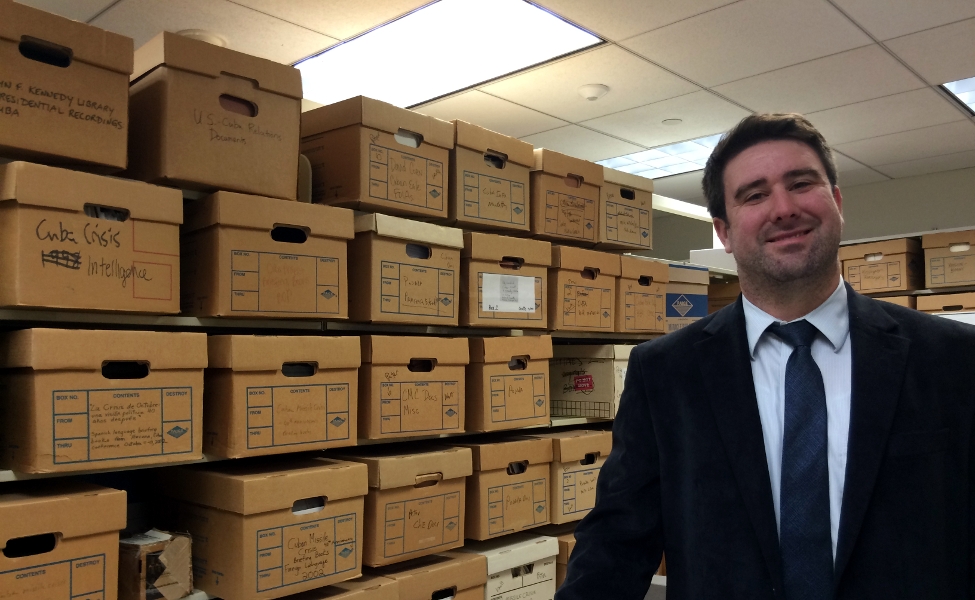 Nate Jones, Freedom of Information Act coordinator at the National Securities Archive, poses in front of "the vault." (Photo by Ashley S. Westerman)

Forty years ago, in the wake of the Watergate Scandal, the Privacy Act was passed along with amendments to bolster the Freedom of Information Act. These two pieces of legislation sought not only to better govern the records held by federal agencies, but also make them more available to the public. Ashley Westerman reports from Washington, DC, that while freedom of information has come a long way since, advocates say there are still improvements to be made.

Nate Jones, the Freedom of Information Act Coordinator at the National Security Archive, gives me a tour around their office. The non-profit research institution collects and publishes declassified government information obtained through FOIA. Located on George Washington University’s campus, the space is full of boxes upon boxes of files lining the hallways, stacked in offices and stuffed on shelves that stretch from floor to ceiling.

There are thousands of documents in this small space, but the “greatest hits,” as Jones likes to call them, are framed on the wall.

“Here’s one of a document saying that, ‘The heat from destroying these tapes of torture is nothing compared to what would happen if the tapes ever got into the public domain.’ So that’s the fight we’re fight…”

Jones estimates there are about 500 boxes all together. That’s about one percent of the organization’s entire inventory of documents requested from the government, or donated by journalists and other advocates of freedom of information.

Jones says his job would be much harder if the Freedom of Information Act, originally passed in 1966, hadn’t been bolstered by the amendments added to it 40 years ago. He adds the government tends to pick and choose what information to voluntarily disclose.

“So the Freedom of Information Act and the teeth it gained in the ‘74 amendments gave the public and journalists a tool to fight for information they want from the government,” Jones explains. “And the government then has to say why it should remain secret, so it swung to a presumption of disclosure when an individual requests it.”

Jones says even though freedom of information in the U.S. has come a long way since then, more can be done. For example, it could reform the measure known as Exemption 5  which allows the government to withhold any inter- or intra-planning information.

This “catch-all” Exemption 5 is just one aspect of current U.S. freedom of information law the FOIA Improvement Act of 2014 seeks to amend. Sponsored by Democratic Senator Patrick Leahy of Vermont, the legislation is awaiting a hearing with the Senate Judiciary Committee. Leahy is chairman of that committee.

Over the last year, FOIA reform has proven to be a bipartisan issue. The House version of the FOIA reform bill, the FOIA Oversight and Implementation Act, was passed unanimously earlier this year. That bill, co-authored by California Republican Rep. Darrell Issa and Maryland Democratic Rep. Elijah Cummings, seeks to make a number of changes…including furthering a previous executive memo by President Barack Obama that said all federal agencies should have a presumption that disclosure is the law of the land.

“This shifts the burden of proof from the public requester seeking information about a government agency with which he must now demonstrate that he has the need, to the government being open and transparent unless it has a good reason to withhold,” says co-author Issa speaking to the House floor on behalf of the bill in February.

The FOIA Improvement Act, the bill still waiting in Congress, also seeks to lock in that presumption. Amy Bennett, assistant director of OpenTheGovernment.org, says it’s the gold standard in international freedom of information. “That the law needs to have some sort of presumption that it’s the public’s information and that the government is just a temporary holder,” says Bennett.

Among other provisions, the bill will also seeks to deal with Exemption 5 by applying a balancing test that will weigh the public interest in the decision to disclose the information, as well as add a 25 year sunset to the exemption. Bennett says these planning records are important to understanding how policy is developed.

Bennett, who attended the committee’s quarterly meeting last week, says both sides of the group have a lot of good ideas about pro-active disclosure. She adds the more pro-active the government is about disclosing information, the less FOIA requests, backlogs and wait time there will be.

“That’s not how FOIA is supposed to work,” she explains. “It’s supposed to be a timely way to get government information. So I think proactive disclosure than lessen some of that volume and help us move through the process more quickly. But we’re always going to need to FOIA because there’s always going to be something the government doesn’t want us to release.”

Bennett says, as FOIA stands now, it’s far too bureaucratic for the public — there are more than 99 agency portals in which to submit a FOIA request — and not a timely enough system for journalists and news makers. Passing the FOIA Improvement Act would improve these shortcomings in the law, along with many others.

Back at the National Security Archive, Nate Jones says despite the act dying three times over the years in the Senate Judiciary Committee, now that the House has passed its version of a FOIA reform bill “the forecast looks better for sunshine than it ever has been,” he says.

FOIA reform advocates hope the bill is bipartisan enough to pass but Congress doesn’t return until November, after the mid-term elections. This gives them only a small window to pass the FOIA Improvement Act before the new Congress takes over in January.