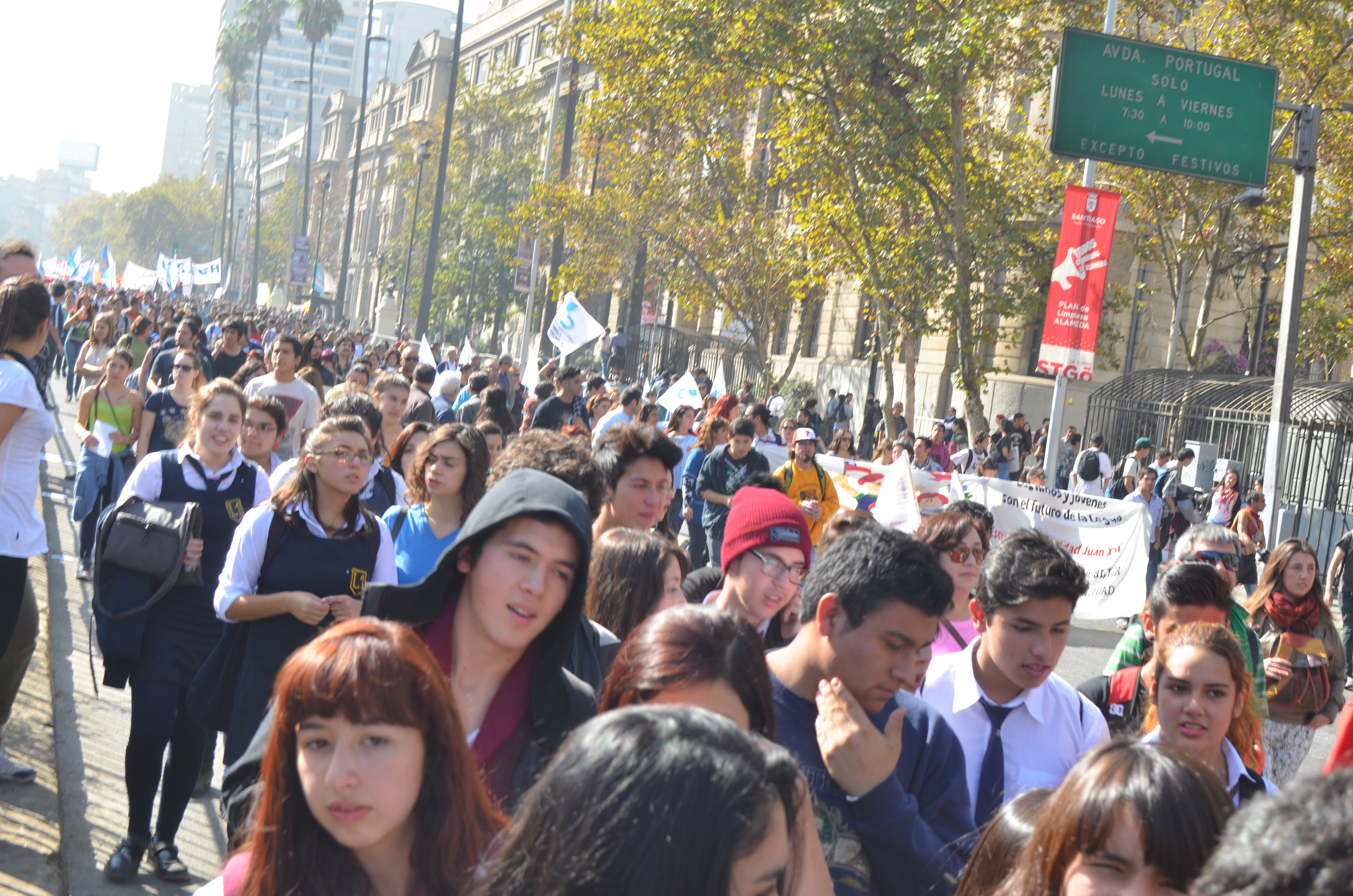 Most of Chile’s public school students don’t have classes today. That’s because the Colegio de Profesores, the largest teachers’ union in the country, is on strike and holding marches in all of the country’s cities. It’s the newest protest in a movement to improve the country’s schools that first erupted in 2006. Now, the teachers are joining the leaders of the student movement and saying that President Michelle Bachelet’s education proposals don’t address the fundamental problems plaguing the country’s schools and that she hasn’t allowed adequate public participation in the bill-writing process. From Santiago, Chile, Eilís O’Neill reports on the debate over how best to reform the country’s schools.

Through marches, strikes, and school occupations, the Chilean movement for education reform is trying to pressure the government to enact deeper reforms than those that President Bachelet has proposed.

Chile’s high school students first marched through the streets and occupied their schools to demand high-quality public education for all back in 2006. The movement grew even more in 2011 when high school and university students banded together to work for change.

President Michelle Bachelet promised to respond to the students’ demands and make education reform one of the three central priorities of her second term, but student leaders say her proposals fail to do away with the voucher-based education model introduced by dictator Augusto Pinochet in the 1980s. Melissa Sepúlveda, the president of the University of Chile Student Federation, says Bachelet’s reforms continue to treat education as a commodity rather than a right.

Since returning to office in March, Bachelet has introduced three bills dealing with education. Two have generated very little debate. But Chileans on both the left and the right have found fault with the bill that addresses primary and secondary education. Objections to the bill’s finer points led Chile’s biggest teacher union to strike on Wednesday, says union president Jaime Gajardo.

“We agree with the goals, and with the education reforms that the government has proposed and is promoting,” explains Gajardo. “We just want the stated goals to be consistent with and the fine print of the laws.”

The controversial bill has three aims. First, it would prohibit the owners of subsidized private schools from using government education funds for personal profit.

Gajardo says the current bill includes an obvious loophole that would allow school owners to continue to reap profits from public funds. Second, the bill would put an end to tuition payments at subsidized private schools. Currently, the government pays both public and subsidized private schools a certain amount of money for each enrolled student. Under the proposed system, the government would increase these payments and eliminate the tuition paid by families. But Gajardo says this change still doesn’t level the playing field for Chile’s public schools, which often have dilapidated buildings and overwhelming debt.

The bill would also eliminate the rigorous entrance exams students take to gain admission to Chile’s most prestigious public high schools, known as “liceos emblemáticos.” In Chile, there are about sixty of these schools, which often educate the children of the country’s elite, while the majority of Chile’s public schools are low-quality, neighborhood-based, and attended mostly by the children of poor families that can’t afford the tuition payments at a private or subsidized private schools.

Bachelet’s proposal would allow the “liceos emblemáticos” to replace their entrance exams with admissions based on applications from the top twenty percent of students from each of Chile’s primary schools. Students at several of Santiago’s most prestigious high schools have occupied their schools to protest the end of the entrance exam.

Other students, such as those at Manuel Barros Borgoño High School, have occupied their schools to object to other aspects of the government’s proposals. Alberto Cid is the student government spokesperson at Barros Borgoño.

“The reform only talks about issues of financing—never about educational quality,” Cid notes. “And that worries the students [here]. Also, it worries them that the reform was written behind closed doors, without the participation of the students, who were the principal driver that brought education reform to the table in the first place.”

Back at the teachers’ union headquarters, Jaime Gajardo says the striking teachers and the students who are occupying their schools have many goals in common.

On Saturday, June 28, the teachers’ union will meet with student leaders to discuss their goals and strategies for coming months.

Meanwhile, Congress is discussing the bills presented by the Bachelet administration, which hopes to pass the bulk of the education reform through Congress by 2016. But, if the government tries to forge a consensus in Parliament without including the drivers of the education reform movement in dialogue, they’re likely to see more marches down the Alameda.