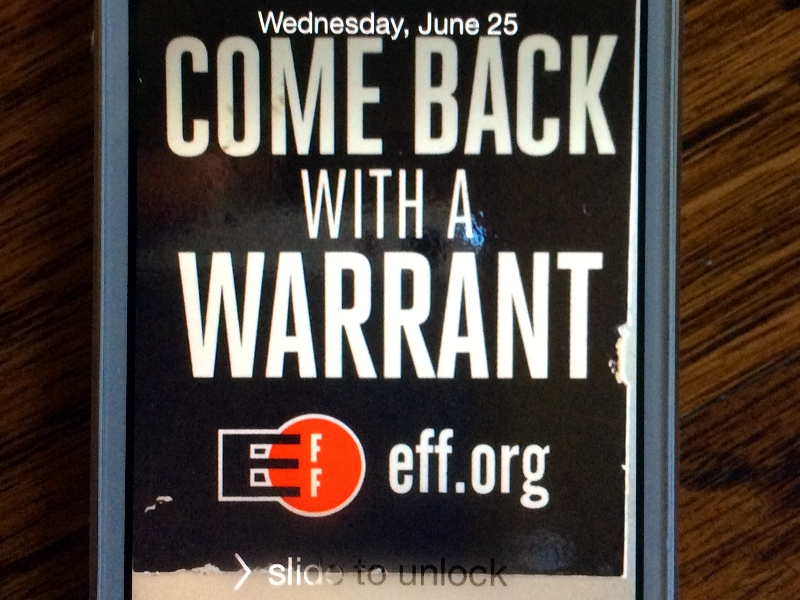 The US Supreme Court handed down a unanimous ruling today that requires police to get a warrant before they can search the contents of an arrestee’s cell phone. The case, Riley v. California, stemmed from an incident in which police examined the digital data of the petitioner after his arrest during a traffic stop.

Many digital and privacy rights advocates have been closely watching the case given its implications for Fourth Amendment protections in the digital age. The court stated in its opinion that many Americans today “keep on their person a digital record of nearly every aspect of their lives.”

For more on the ruling and its implications, FSRN’s Shannon Young spoke with Trevor Timm, Executive Director of the Freedom of the Press Foundation and legal analyst specializing in free speech and government transparency issues.

Shannon Young: First, just how significant is the ruling and can its interpretation be expanded beyond just cell phones?

Trevor Timm: Well, I think it’s hard to overstate how this ruling is really a landmark win for privacy. There are millions of arrests in the US every year and a lot of them are for things as little as failing to pay a parking ticket. In the past, the police and federal government have thought that they can then take your cell phone after this arrest and search it without getting a probable cause warrant, like many people would assume they would have to do. And then when they are in your cell phone, they can obviously find out very intimate details about your life that have nothing to do with how you were arrested. And a lot of people, including our organization and many others, thought this was a violation of privacy and the Fourth Amendment and thankfully, the Supreme Court ruled today, 9-0 in a unanimous decision, that actually that does violate the Constitution and the police do have to get a warrant.

SY: The information stored in cell phones goes beyond just digital documents. There’s also the matter of browsing history and geolocation tracking. How did the court’s decision address those specific points?

TT: Right, Justice Roberts actually made a very good point that we use the name ‘cell phone’ to describe what’s in our pockets but it actually a misnomer. It’s actually a mini computer which can do all sorts of things. It can act as a music player, it can act as a newspaper, it can act as a computer which you connect internet. It can act as a correspondence machine which you talk back and forth to your friends and family through a variety of ways, whether it’s email or text messaging or phone calls. And it is just a window into our lives that is well beyond anything that was in our pockets in the past. It can’t be compared to a piece of paper, or a wallet, or an address book because it’s actually all these things and many, many more.

Justice Roberts made the point that if you wanted to carry around with you everything that was in your cell phone, you would need basically to drag a Mack truck behind you if all of these things were in the physical world. So, I think that this is the first, or at least the best, indication the Supreme Court is finally getting that we need to change our privacy laws or at least adapt our existing privacy laws to the digital age so that people can feel more comfortable about their privacy.

SY: In it’s ruling, the court was very clear in the need for a warrant prior to a police search of an arrestee’s cell phone. But was there anything in the text of the decision that would prevent police from going to third parties, like internet companies, for the same information without a warrant?

TT: Well, right now there something called the third party doctrine which a lot of privacy advocates have asked to be re-evaluated in light of the technology that has exploded over the last decade. Basically, the third party doctrine says that if a third party, an Internet company or a telecom company holds your records, like your phone call records or your emails, then you don’t have a reasonable expectation of privacy. But you know, third parties always hold our communications and our private records these days and a lot of people don’t even know that’s the case. And a lot of people, even if they do know, think that that information is private and that the government would still need a warrant to get it. And while they didn’t rule specifically on the third party doctrine, you could tell by the way that Justice Roberts wrote his opinion that it’s possible that in the future the Supreme Court could revisit that idea and all indications suggest that they may rule in favor of more privacy in that case as well.

SY: On the other hand the type of surveillance that has been conducted by the NSA doesn’t go through the US Supreme Court, but rather, the FISA court. When it comes to the Fourth Amendment’s protections against unreasonable searches and seizures, are we really just dealing with two sets of laws: one that is public and another that is secret?

TT: Well, there is certainly a huge problem with secret law in this country, especially when it comes to the FISA court, which was originally established just to confirm or deny warrant applications, but has decided to write these sweeping opinions that affect everybody’s privacy that we have no idea what they actually say. But at least the secrets opinions that we know about are actually based on prior Supreme Court precedent and these recent cases really could end up poking a hole in a lot the NSA’s legal theories.

You know, they’re basing their entire operation on the fact of this one case in the 1970s called Smith v. Maryland which was about one suspect where they’d just got the phone numbers he’d been dialing in for 3 days and they already had reason to believe he had committed a crime. And the NSA has worked this into the idea that they can collect everybody’s metadata, all sorts of kinds of information on everybody, and for the end of time.

And so, I think that this case will be cited in pretty much every privacy case that comes forward now, whether we’re talking about our cell phone location, which we carry our cell phone around 24/7 so can the police get that without a warrant, and all sorts of other metadata issues when were talking about all of the people we call and text and email everyday. So I don’t think, like I said, I don’t think you can overstate the implications of this case and it should be really interesting to see where it brings us in the near future