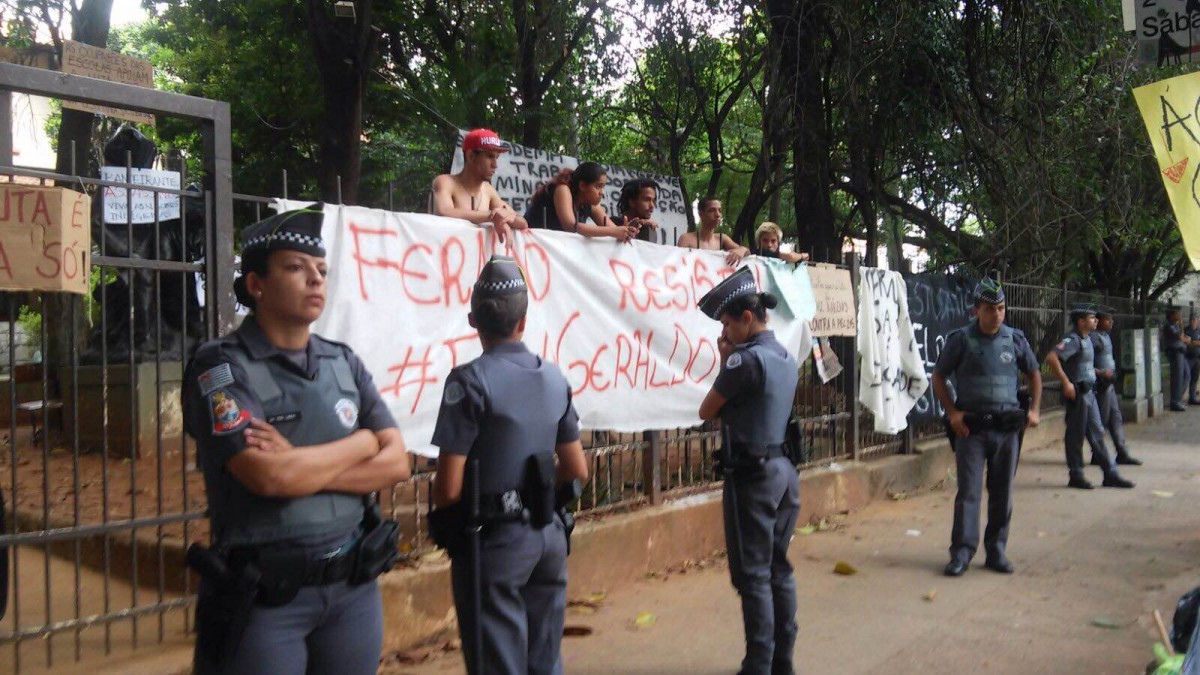 Public school students in São Paulo, Brazil have successfully stalled state government plans to close 94 public schools as part of a rehaul of the public education system. The closures would have affected more than 300 thousand students and 83 thousand teachers. Worried that school shut-downs will worsen already precarious learning conditions, students are not letting down their guard…and have vowed to continue with occupations until the state government definitively scraps the closure plan. From São Paulo, FSRN’s Sam Cowie reports.

After students occupied nearly 200 schools for the past month in protest, São Paulo state governor Geraldo Alckmin has suspended the planned closures of 94 public schools in São Paulo state. But students say that’s not good enough. They are holding fast in about 145 schools, half of which were slated for closure, the other half are actions of solidarity.

In the week leading up the temporary hold on the plan, demonstrations also extended beyond the schools with a wave of student street protests, some of which military police violently cracked down on.

The state government says the planned closures are part of a “reorganization” aimed at making the public school system more efficient.

São Paulo regional director of education Sandoval Cavalcanti said “all students, parents, communities, and teachers can rest assured that they will be served by the state network.”

The reorganization would close some schools that mixed junior high and high school in the same buildings. Education officials say this would improve the quality of teaching and make for better use of resources.

But São Paulo’s leading teachers union, the Official Education Teachers Union of the State of São Paulo, has blasted the reorganization. They say the state government plans to make at least some of the school closures permanent, which would overload an already overcrowded system. They say it’s already common to have 50 students in a classroom. School overcrowding was one of the reasons that São Paulo teachers took part in a three-month strike earlier this year.

Following the initial wave of occupations against the closures, the students are now calling for better overall public education standards.

Speaking from the Joao Kopke school occupation in a dilapidated part of the city center nicknamed ‘crackland,’ because of the visible population of street addicts, 21-year-old high school senior Diego Anjos dos Santos says classroom are overpacked, there are security issues, teachers don’t turn up and there are not sufficient computers, tables or chairs.

He sees the closures as a direct attack by the state government on the rights of poorer students.

“The state government wants to take away our right to education, because they know it’s the most powerful weapon that we have,” Santos explains. “Without this, they know they can manipulate us.

Jessica Santiago de Souza, 20, is occupying the Salvador Allende high school in the impoverished outskirts of São Paulo’s East Zone. She works during the day, and studies for her high school diploma at night. She’s the oldest in her class, having dropped out previously due to family problems.

“There are only two other schools in this area and I’m scared that the classes will be too filled,” Souza says. “Also, we all know that some people aren’t really interested in studying, and the more of these people we have to a classroom, the more problematic it will be.”

Joao Carlos Novaes Luz of the state’s teachers union says authorities are not taking into account the difficulties many students face and the loss of a neighborhood school could mean the difference between dropping out or continuing one’s education.

“Being further away from home, in a different environment, in a different neighborhood, with different students, different teachers, all of this is going to have an impact the students learning,” Luz points out.

Some analysts predict that if the closures go ahead as originally planned, at-risk students will increasingly dropout, restricting them to low-level jobs in the future and making them more vulnerable to gangs and crime.

Brazil has the one of the highest murder rates in the world, with around 10,500 children killed in 2013, which is around 20 percent of the overall figure.

It also has the world’s fourth-largest prison population, having grown by 74 percent between 2005 and 2012, with the majority of inmates being young, poor and uneducated. Further complicating matters, Brazil recently passed a law lowering its age of criminal responsibility from 18 to 16, much to the dismay of human rights campaigners.

Since the occupations began, officials have served protesters with several eviction orders, all of which were overturned by judges at the last minute.

But while protesters have vacated some of the schools, most of the students currently occupying nearly 150 buildings say they plan to stay put until the closures are canceled entirely.