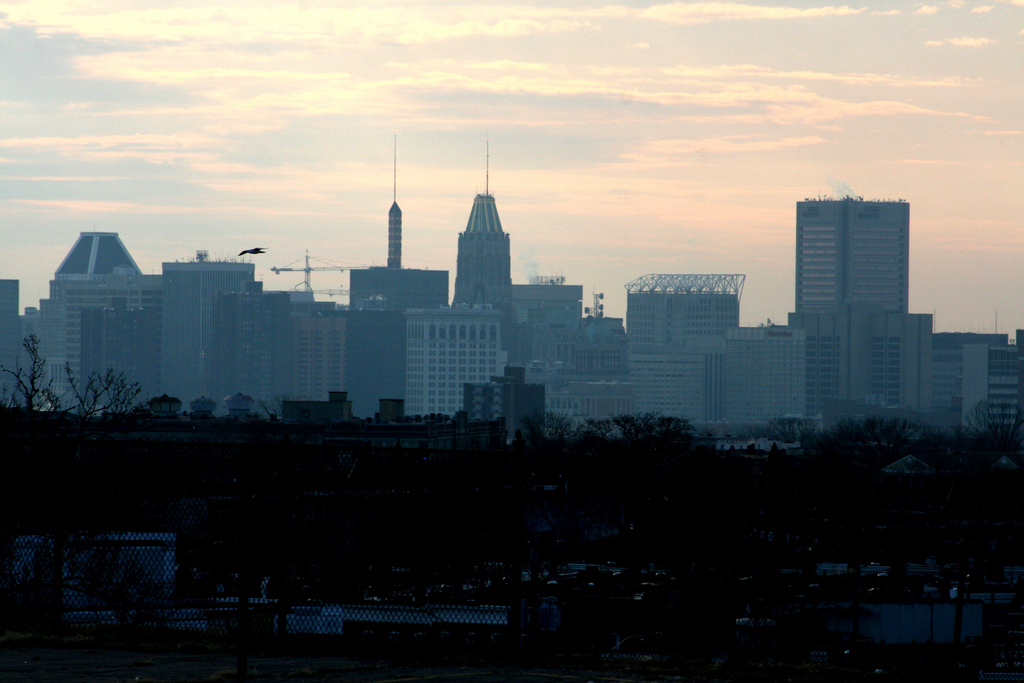 Latino and African-American high school students from Baltimore have been in the news over the past few weeks over growing racial tensions between the two groups. The population of Latino immigrants in Baltimore has grown dramatically over the past two decades, changing the demographic make-up of areas that were once traditionally African American and white. At least two high schools near downtown Baltimore have been epicenters of conflict. Dolores M. Bernal brings us this report from Maryland.

The rhythmic sound of cumbia goes hand in hand with the colorful, tropical décor of the The Latin Palace, a two-story nightclub in Baltimore’s Fells Point neighborhood.

The club’s owner, Enrique Ribadeneira, immigrated to Baltimore from South America over 20 years ago. In that time, he’s seen periods of racial tension come and go. “What happened many years ago is returning again,” he says. “Those things that we thought had, to a point ended, that period of time — now again we see that something is out of balance with regards to the treatment that business owners and people of our culture receive.”

Ribadeneira has been following local news about tensions among Latino immigrants  and African-Americans in Baltimore-area high schools. The tensions have parents, school administrators and city officials worried.

Latino immigrant parents say their children are constant victims of assaults and robberies allegedly committed by African-Americans. “They steal their cell phones, their money,” says Anabel Dominguez, a Mexican immigrant whose son attends a high school in Baltimore. “They wait for them outside of the schools and they are assaulted. Finally, some Latino students had had enough and set up a confrontation to fight them. The school called the police.”

Assaults against Latino immigrant students in Baltimore eventually led to the death of 15-year-old Oscar Torres in late May. Vigils were held by community members and activist organizations calling for an end to the violence.

One organization that is attempting to bridge the divide between the two communities is CASA de Maryland, an immigrant advocacy organization.

“I grew up in South Carolina, I’ve lived in New Jersey and now I live in Maryland.  In every state is the same issue,” comments  Sorayda Moreira-Smith, a community activist with CASA. She says language barriers and cultural differences have contributed to the tensions in Baltimore even though both groups share similar socioeconomic conditions. “You see the separation between the two communities, but you see that there is a trend towards uniting the communities more and more; especially when you see organizations like CASA de Maryland joining other African American organizations in unity, coming out together.”

One of the ways CASA is working to unite the Latino immigrant and local African-American communities is with a program called “Black Love, Brown Pride” which highlights the groups’ shared circumstances while celebrating the diversity in their cultures.

Kisha Smith – no relation to Moreira-Smith – is an African-American parent whose son Derrick attends high school in Baltimore and participates in the “Black Love, Brown Pride” meetings: “It’s been great, Derrick has learned a lot about different cultures, the foods. He has nothing to say but positive things. I stand behind him 100 percent. His group passed out ‘positive t-shirts,’  brown hope and pride and so, he is a rebel. I love it.”

Two African-American youth groups have joined CASA to help forge good relationships between immigrant youth and the black community. Moreira-Smith of CASA says that across the country, racial tensions between new immigrants and other groups is a real issue which can be overcome by focusing on shared interests and creating a common ground through dialogue. She adds that once the barriers that separate the communities come down, “you do see them working together to deal with the bigger issues around violence, housing, families and children because they realize that they are no different from each other. They are one community.”

Since the tensions started, police presence at the high schools has increased and school administrators have held meetings with parents and students to deescalate the situation. The school is also hiring more English as a Second Language teachers to better serve immigrant students.

Reverend Cortly “C.D.” Witherspoon, president of the Southern Christian Leadership Conference, attributes the violence to built-up frustrations stemming from the lack of opportunities in the city for low-income people of all races. “The jobs are so limited, so there is an animosity that has developed between African Americans and the Latino community to some degree,” he says. “What I think is happening is a major misunderstanding. I’ve heard instances from African Americans that immigrants were coming in and taking jobs, but the reality is that the mayor is passing budgets at City Hall giving big tax breaks to developers and job creation is not happening and that’s an issue where Latinos and African Americans could work together side by side.”

Members of CASA de Maryland have said that the new African-American mayor of Baltimore, Stephanie Rawlings-Blake,  has taken a profound interest in the issue. However, concrete steps or an articulated plan to address the racial tensions have yet to materialize.