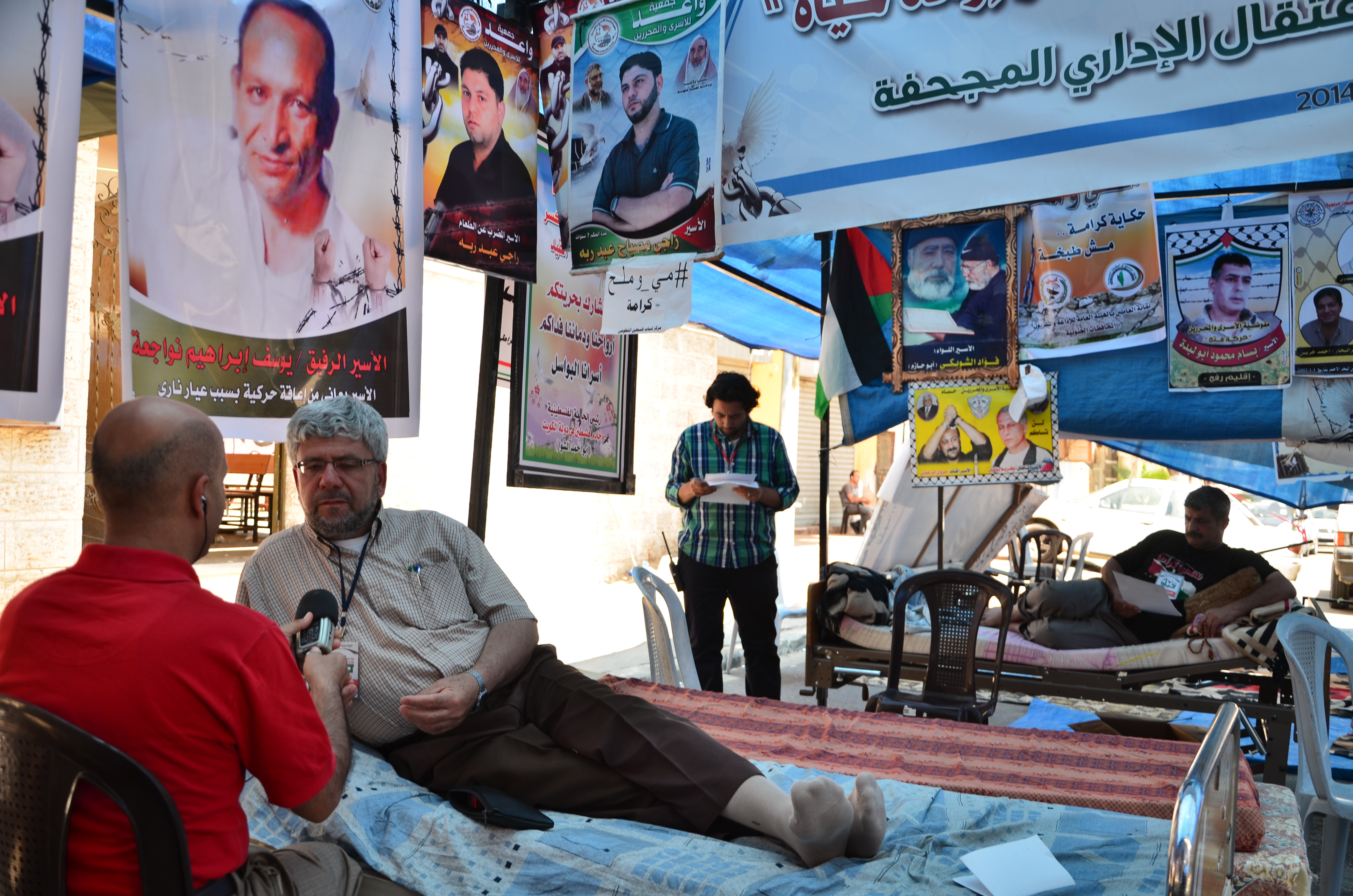 The alleged kidnapping of three teen-aged Israeli settlers sparked a increase in Israeli military actions in the Palestinian territories. Israeli authorities also clamped down  Palestinian detainees in Israeli jails, where for nearly two months more than 140 have been on hunger strike to demand that Israeli authorities either release them or bring them to trial.  Dozens have been hospitalized and are facing the threat of force-feedings.  FSRN’s Rami Almeghari has more.

Outside the offices of the International Committee of the Red Cross in Gaza City, Misbah Abed Rabo, the 58-year-old father of a detainee, has laid on a bed fasting for the past six weeks. Misbah’s eldest son, Raji has been in Israeli detention for more than four years.

“A prisoner of war is the one, taken from a combat tank, not the one, taken from his or her residential home,” says Rabo. “When the Israelis came over to our neighborhood, they largely vandalized the whole area including bulldozing homes and trees, like in an earthquake, like a tsunami.”

In 2009, during the Israeli attack on the territory known as Cast Lead, Misbah’s son was arrested, charged with helping Palestinian resistance fighters and sentenced to five years in prison.

According to the West Bank’s Mandila Institution for the Defense of Palestinian Detainees, the Israeli army has stormed a number of West Bank areas and rounded up more than 200 Palestinians in the crackdown. Nearly 50 of those were re-arrested, having been released from jail in a 2011 Egypt-mediated swap deal between Hamas and Israel that freed more than 1000 detainees from Israeli prisons in return for the release of Gi’ad Shalit, an Israeli soldier captured in Gaza in a cross-border attack in 2006.

“Israeli authorities have now deprived detainees of access to TVs, newspapers, some foods, as well as the right to family visits for one week,” says Bothaina Dokma, Director of the Mandila Institute. “Israel also imposed a collective punishment on the entire Gaza Strip, by then. All this happens in a time that nobody has yet claimed responsibility for capturing the missing settlers.”

Israel accuses the Islamist Hamas party of kidnapping the three missing settlers, though neither Hamas nor any Palestinian group has claimed responsibility. Israeli Prime Minister, Benjamin Netanyahou called the matter a “serious incident” that will have “grave consequences.”

“The ministry calls on all international organizations and human right groups to take a firm stance towards Israeli attacks against our school children and schools,” said Thabet. “These attacks are in clear violation of all humanitarian and international norms.”

Israel says the attacks came in response to rocket fire from Gaza. The latest spate of military action also targeted several training camps, belonging to Hamas and other armed groups in Gaza, such as the Naser Salah Eldin brigade.

Local political analysts suggest that the latest Israeli crackdown along with political campaigning against Hamas, aims to undermine the recent unity deal between the Islamist Hamas, which Israel calls a ‘terrorist’ group, and the Fatah party of Western-backed Palestinian President, Mahmoud Abbas.