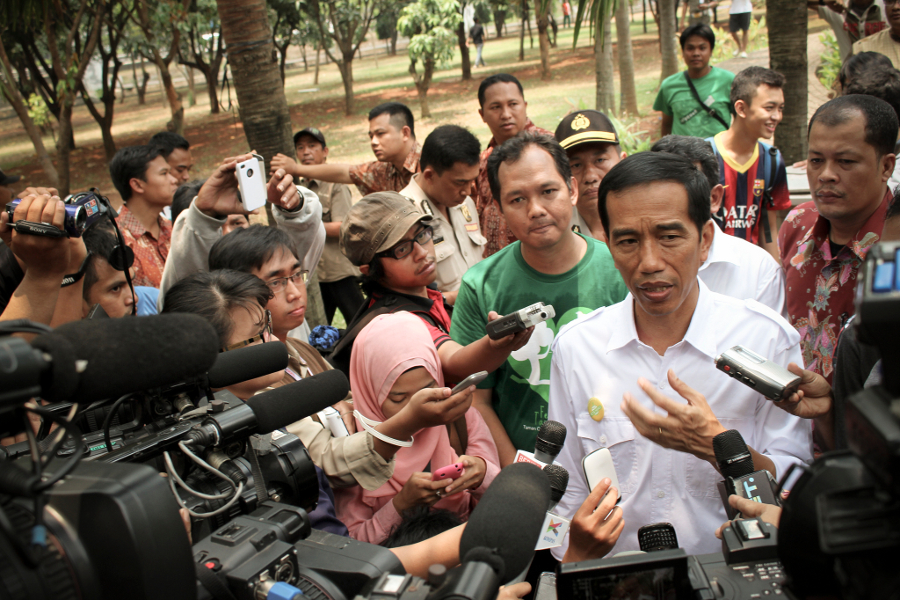 For the first time in Indonesia’s democratic history the country has a President who is not from the military or political elite. According to official results released today, Joko Widodo won 53 percent of the vote, with 8 million more votes than his opponent, Prabowo Subianto. Rebecca Henschke in Jakarta reports many see this is as a turning point for the country.

In Indonesia’s 16 years of democracy, the faces on the ballot have been dominated by military and political elites.

Forty-year-old musician Marzuki Mohammad voted for the first time in this election. In the past he, like many of his generation, didn’t feel as if there was anyone to vote for. But in Joko Widodo he saw someone he could believe in. Markuzi wrote a rap about the candidate that became an theme song for Jokowi supporters.

“This election was crucial, it was historic,” Markuzi told FSRN. “I, like most people, feel exhausted and sick of our democracy being dominated by the elite. This is our chance to fight against the corrupt elite and return democracy to the people.”

Markuzi says he was also deeply worried about a victory for the rival candidate Prabowo Subianto, a former general who commanded the army specials forces under Suharto’s dictatorship. Prabowo was fired from the military for kidnapping student activists in the 1990s during the final days Suharto’s rule.

“There are lots of issues involving kidnappings and human rights abuses,” said musician Marzuki, in reference to the years of authoritarian rule. “I didn’t want this nation to be built on lies, we have to become more transparent, we need to heal our wounds. We can forgive but we can’t forget those things.”

Historian and respected author Goenawan Mohammad says he has never seen people so intensely involved in politics: “This is one of the most beautiful moments in Indonesian history. The volunteers are the real heroes not the politicians. The people who put their money and their time into this idea of voting for Jokowi,  which is not a very clear idea but the sentiment is there. How people sacrificed themselves for a common cause, which is unusual after so many years of cynicism. If I die tomorrow I am happy. I am happy to see this.”

Jokowi is playing down his election victory. On board a traditional boat in Jakarta’s historic harbor he called for nation unity, saying the priority now is to “repair the damaged relationships within families, between friends and heal divisions that have been created in the work place.”

The election has been the most divisive in Indonesia’s democratic history. Prabowo ran an effective and slick campaign and Jokowi has won by only a margin of 7 percent.

Shortly before the official results were announced Prabowo Subianto said he was withdrawing from the count calling the process flawed. “There was massive, structural and systematic cheating during the 2014 election,” he told a crowd of supporters. “We will exercise our constitutional right to reject the presidential election and declare it unconstitutional.”

Listening in the front row is Ibu Warni and her husband. They are dressed in the national colours of red and white and their five-year-old son is wearing full military uniform and Prabowo pins. “We will protest this result. We can still take this to the constitutional court, there are many suspicious things. It is not possible that Jokowi could have won without some vote rigging.” She adds that her family will not accept Jokowi as their president because he is “not fit to be President, just look at this face, he looks like an ordinary person off the street. He hasn’t serve or fought for his nation. He was just brought from the village to the city. The only person who is ready to sacrificed himself for the good of the nation is Pak Prabowo.”

Under Indonesia’s election laws, Prabowo now has the right to lodge a legal challenge in the Constitutional Court. While there have been some documented cases of irregularities, most international observers have declared the election free and fair.

For the first time, the election commission made all the vote tally forms from the thousands of polling stations publicly available on their official website. A crowd-sourced oversight project, kawan.pemuli, attracted some 700 volunteers. They have been downloading the forms and doing their own court. Wandy Tuturoong, who works as a consultant in Jakarta’s finance district, has been monitoring the voting during his free time: “Now everyone can participate. Everyone can see. There is no black box anymore. It is transparent. I think transparency is very important in government. All the data is there, it verifiable. If someone is trying to cheat or change the results at the provincial or national level, they can’t do that because every eye is on them.”

All eyes are now on Joko Widowo. A man who was raised in a bamboo shack in a riverbank slum is now president-elect of one of the world’s largest democracies. He now has the unenviable task of first uniting the nation of 250 million people before tackling issues such as rampant corruption, high unemployment and Indonesia’s crumbling infrastructure.