Mentoring program cuts recidivism rates in Kansas prisons by half 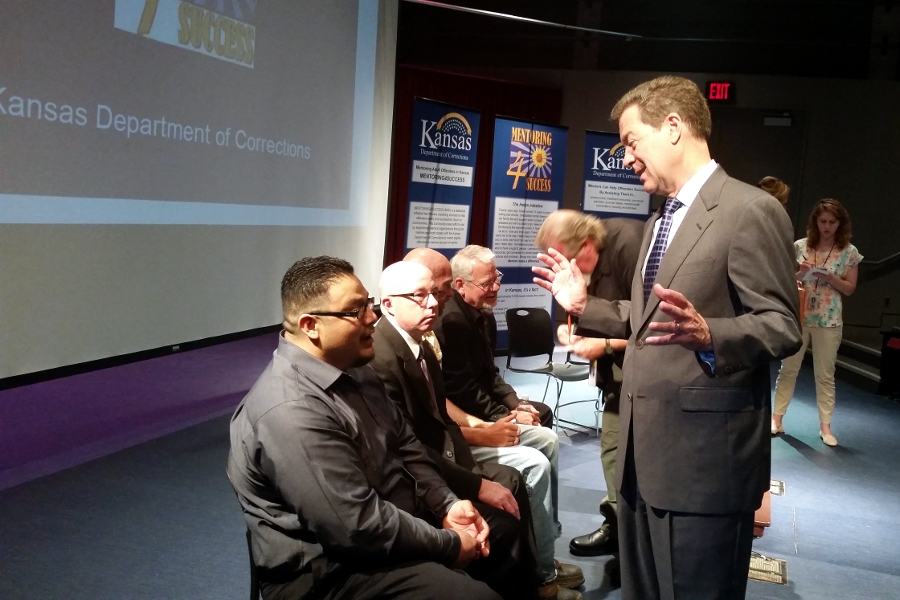 Recidivism rates in Kansas have dropped dramatically since the state’s Department of Corrections introduced a mentoring program which pairs inmates slate for release with community role models. Other states have started to take notice and are turning to Kansas for advice about how to implement similar measures. FSRN’s Joe Cadotte has more from Wichita.

Mentoring4Success, a program of the Kansas Department of Corrections, has matched up more than 4,000 released offenders with mentors in the last three years.

Mentee Kyle Kelley called the program a “humbling experience” at a recent press conference in Wichita. “Somebody’s there to talk to you when you need them the most,” he said. “I get more out of it than I can ever describe. It’s a real good deal.”

Kelley was released last November after serving three years for attempted murder. Six months before his release, Kelley was assigned a mentor – who he says gave him the confidence to get a job.

The Mentoring4Success program is an initiative implemented by Kansas Governor Sam Brownback. The initiative has a simple premise: connect inmates with a mentor at least six month before the end of their sentences. Mentors offers advice and support during the first year of release. The idea is to cut recidivism rates.

Gloria Geither, Mentoring Director for the Kansas Department of Corrections, says lack of family and friends is one of the biggest hurdles offenders face when trying to reintegrate back into the community. “It’s normal things that you and I take for granted every day; when we’re driving to work, or we have a bad day at work we pick up the phone and we call a support system that we have, a family member or friend that we know. Our offenders do not have that relationship in their life.”

And that support system – simply having someone to talk to – goes a long way.

In 2001, Jose Huerta was convicted of aggravated burglary and rape. He says he saw his two daughters ‘grow up in pictures.’ “There’s not one day that I do not wish I could take back all the bad I ever did in my life for them,” he adds. “I made promises that I broke to them. Those are the worse feelings and the worse things you can do when you’re locked up – especially if you have kids or family.”

In January 2014, six months before his release, Huerta was paired with mentor Jim Gardner, a Kansas Red Cross worker. Huerta says the relationship has been a lifeline. “When you have someone who doesn’t know you and is getting to know you, they can see you as what you want to become, which is a changed individual,” he told FSRN. “One needs someone to tell you, ‘hey, you’re a good person. Granted, you did bad things, but you’re not the same. You’re going to change because I can see it in you. That’s one of the main things that people need, because without that, what do you really have?”

Huerta now works as a machinist in a Wichita-area factory, and has been mending his relationship with his family.

Mentor Jim Gardner says the match has been positive for him as well: “Society tends to want to say ‘they don’t deserve a chance to change, and they don’t believe that they can and people judge way too quickly when it comes to these men; when all along they look at themselves and they realize they could be in the same place Jose was, they just didn’t get caught. When they get out of prison, they don’t have any place to go and they don’t have any support. And society says ‘well that’s just too bad,’ just go deal with it yourself. A mentor can help them change that, and let them know that they are worthy, that they are worth something because they are trying to change their lives, and I’m blessed to have Jose as a friend.”

The Kansas Department of Corrections has implemented measures such as job training, reading and higher education – as well as drug and alcohol treatment programs which have reduced the statewide recidivism rate by half in the last ten years.

While a 20 percent re-incarceration rate is well below the national average of about 48 percent – the Mentoring4Success program has cut Kansas’s already low recidivism rate by more than in half – in the year it’s been measured.

And the success is creating waves.

Twelve states have already toured the Kansas DOC to learn about its mentoring program – including North Carolina – which has the worst recidivism rate in the nation.

The Mentoring4Success program hits the three-year mark this month. A larger picture of its  success will come when its data is compared with that of states that measure recidivism by the likeliness former inmates will be convicted of a new crime within 36 months of release.