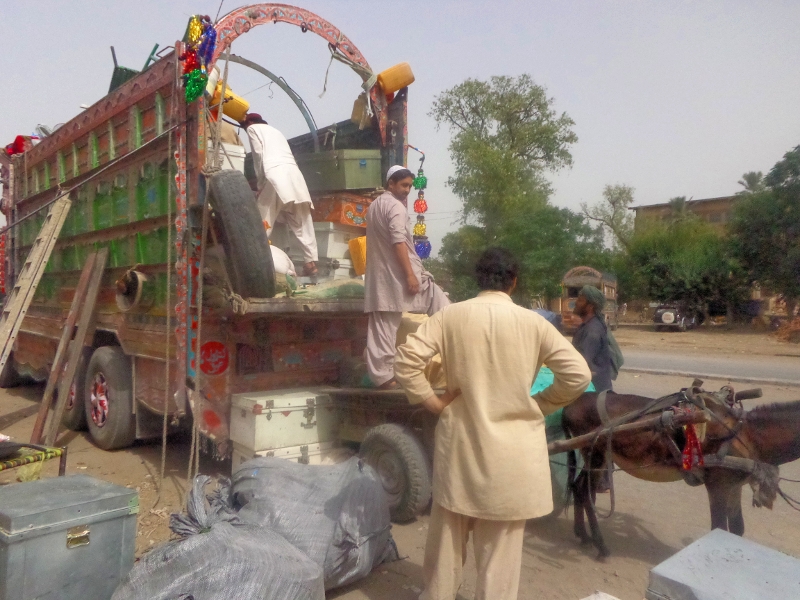 Pakistan’s military has launched a major offensive against Taliban militants in North Waziristan, a region bordering Afghanistan. In the last two weeks, half a million people have fled the conflict. Of those, 80,000 people have fled to Afghanistan, but most have headed to Bannu, where Fakhar Kakakhel reports.

Download
Thousands of families have arrived in Bannu, a town along Pakistan’s tribal belt, near the Afghan border. They are fleeing a military offensive targeting Taliban forces in the area.

Pakistan’s military claims to have killed around 400 militants, including foreign fighters, in airstrikes in the last two weeks.

“The curfew imposed in the area has badly affected life in North Waziristan,” says Fida Wazir. “All major roads are blocked and so people are facing problems in evacuation. The curfew and the military operation are also affecting area business and education. People have no access to basic healthcare facilities.” According to Wazir, more than 60 civilians lost their lives due to unannounced military operations and bombardments in his hometown. “More than a dozen members from one family were killed in the town of Mir Ali – all of them women and children. Five thousands shops and four mosques have been destroyed in the shelling and bombardment.”

The thousands of Internally Displaced Persons (IDPs) currently in Bannu have fled their homes in villages across North Waziristan in search of safety.

Among them is Rafiullah Dawar, who arrived with his family.

“We were not warned about the operation,” Dawar told FSRN. “After the bombing started, we were trying to leave the area but the army told us no operation would happen so we should not leave. When the offensive started, there we were.” He says when he and his family decided to leave, they had trouble finding transportation. “We at last found a truck and started our journey. It was so hot that all our family members preferred to move with bare feet. Children die in this scorching heat. Our home is 28 kilometers away from Bannu in Mir Ali. Normally it takes forty minutes, but it took us fifteen hours to get here. There was nothing on the way except one government vehicle doing nothing.”

Bannu has been unprepared to receive the influx of people. Shelter, food and water are in short supply and the temperatures are scorching. Among the displaced, women and children have suffered the most. Children miss their schools and playgrounds, which have now turned into a battlefield between the military and militants.

Nine-year-old Junaid came to Bannu from the Hasso Khel area of Mir Ali. “I saw drones in the air when I was playing cricket,” he says. “We left a few days ago when the operation started in our area. I used to be in school at seven in the morning in my village. I miss my classmates and my playground.”

Officials say camps have been set up at multiple locations for these displaced families. They are supplied with both food and non-food items like oil, sugar, tents and baskets.

Mohammad Adnan, spokesperson for the Disaster Management Authority in the Federally Administered Tribal Area, says three camps have been set up in Bannu for internally displaced people coming from North Waziristan. “So far we have registered almost half a million of IDPs including women and children. We are also providing them registration mobile teams. In and off the camp we are providing them both food and non-food items.” He adds that IDPs have access to healthcare facilities and the option twenty thousand rupees (200 US dollars) in cash. “As people of North Waziristan have a tribal background so they prefer to live off the camp so we are providing them cash.”

Analysts say after the exodus of almost half a million tribesmen along with their families, it seems military is set to launch its ground strikes in this hilly tribal belt considered to be the epicenter of global terrorism. But for displaced tribesmen, peace in their homeland seems as far as they are from their own homes.