Protests and counter-protests in Murrieta over immigrant minors 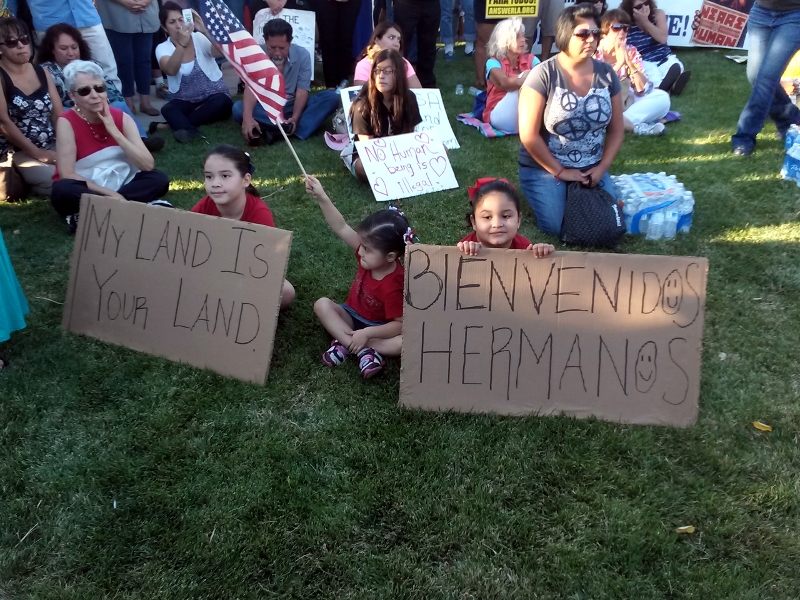 Children with their hand-written signs.

On the week of Independence Day, the sleepy southern California community of Murrieta made international news when angry anti-immigrant protesters blocked three buses with undocumented minors from entering a Border Patrol station on dusty road outside of town. A week later, just two miles away, it was the pro-immigrants rights’ advocates turn to speak up. This time the tone was very different. And so were the messages: that the anti-immigrant protests did not reflect their community, and the stream of undocumented children from Central America is not a “border breakdown,” but a humanitarian crisis that requires action, not anger. FSRN’s Larry Buhl has more from Murrieta, California.

A pro-immigration crowd of more than two hundred gathered at sunset outside Murrieta City Hall on Wednesday to support unaccompanied children arriving in their community and in other cities in the southwest. It was an interfaith vigil of community groups throughout inland Southern California. Speakers had common message: angry anti-immigrant forces with their shouts of “Go Home,” and “We Don’t Want You,” did not represent their community.

“Many of the demonstrators last week especially that scene with the bus, they had come from outside the community,” said Father Jack Barker with St. Martha’s Catholic Church in Murrieta. “I would challenge the media to do a little bit more scientific research and go out and question the people who are demonstrating and where they’re from and find out what the issues are, and then we’ll know.”

Many residents of this quiet desert city of 100,000 were dismayed that their small community had become the flash point for a renewed immigration debate.

On July first, dozens of anti-immigrant forces turned away the first three buses from the Murrieta, California border patrol station, where up to 150 undocumented children from Central America were scheduled to arrive every 72 hours for processing. The protesters claimed victory, and Homeland Security so far has avoided more tense stand-offs in Murrieta by sending the minors to safer and quieter centers in nearby San Diego and El Centro.

Many of the anti-immigrant forces that turned away the buses last week are allegedly members of the Federation for American Immigration Reform. The Southern Poverty Law Center considers FAIR to be a hate group due to white supremacist affiliations of its leadership.

Wednesday evening’s interfaith vigil was held in front of Murrieta City Hall for a reason. Many put the blame for last week’s dramatic events squarely on lawmakers in their city. “From the mayor, the city council, the police department who gave more ammunition to the anti-immigrant folks who are still camped outside the border patrol station down the street from here,” remarked Fernando Romero from the Justice for Immigrants Coalition, the organizers of the vigil.

Romero said his coalition was asked by Homeland Security to provide shelter, food and clothing for the children – and thanks to the protests they’re facing a more difficult task. “DHS and Border Patrol and ICE are overwhelmed and they don’t have the capacity and infrastructure to house this many people. So that wasn’t new that they were going to reach out to us to house and provide relief. What is new is that we have this situation going on down the street at the Border Patrol station that’s making it more difficult to us to provide relief and more difficult for those who are incarcerated at the border patrol station. That’s what’s new.”

The undocumented minors due to arrive in Murrieta are not, as many protesters feared, being dumped into the community, but rather are being sent from overwhelmed border facilities in Texas for processing prior to deportation hearings. They are mostly from three Central American countries, Honduras, Guatemala, and El Salvador, and fleeing not just poverty, but increasing gang violence.

And the children and teens are not guaranteed immediate entry into the United States from Murrieta or any of the other border control stations across the southwest. According to Kids in Need of Defense, or KIND, ninety percent of the children are released from detention centers like the one in Murrieta within a month, usually into the custody of a family member in the U.S., if they have any. The rest remain in custody.

Once released, they must return for hearings to determine whether they can remain in the U.S. Administration official say the majority of them will be returned to their home countries.

“The majority of these children do not have representation in their immigration proceedings,” said KIND’s communications and advocacy director. “I’ve seen young children, young children, toddlers, five year olds going up to the judge, and the judge looks at the child in her pony tail and Sunday best and throws up his hands and says, ‘I can’t go on with this case, this child does not have an attorney’. So that children who don’t have attorneys can’t make their case for US protection. The result is, those who are eligible can be returned to their home countries where many face danger, even threats to their lives.”

President Obama has called on Congress to approve $3.7 billion dollars to handle the thousands of child migrants crossing the border, while at the same time promising to speed up deportation efforts. The ACLU has filed suit, claiming the government is denying the children due process of law required by the Federal Immigration and Nationality Act.

Back in Murietta, pro-immigration activists are alarmed by those who say, “send them back.”

Gail Davis drove forty miles, from Long Beach, and it was her second vigil of the day. “These kids are escaping poverty and violence,” she told FSRN. “They’re refugees and I can’t believe that our government is turning them away.”

The Obama administration estimates more than 50 thousand undocumented children and teens were apprehended entering the United States by July first, a ten-fold increase over 2011. And it doesn’t expect the migration to stop. There is one thing people on all sides of the debate agree on: words alone will not fix this crisis.

Photos from Wednesday’s interfaith rally in favor of the unaccompanied minors. Click any thumbnail to launch slideshow. 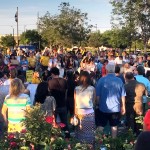 Approximately 250 people came out to show support for the unaccompanied minors. 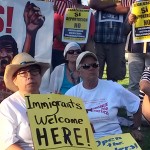 Some came from other parts of Southern California. 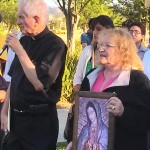 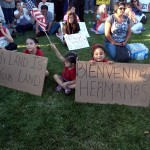 Children with their hand-written signs. 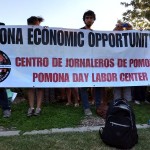 One of the organizations that came to Murrieta for the rally. 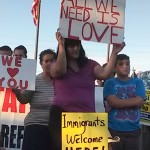