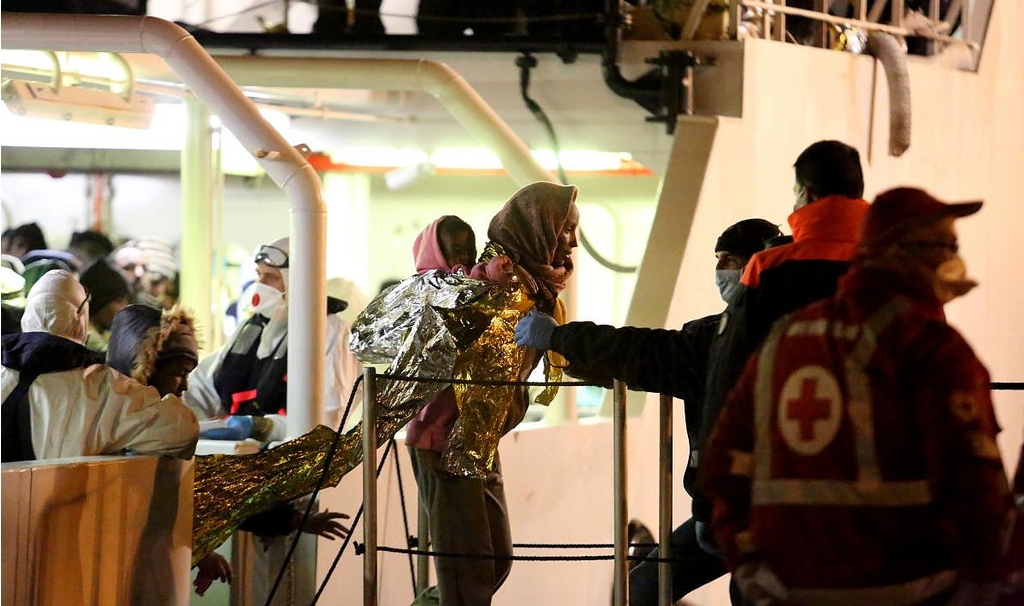 The "Gregoretti" ship of the Italian Coast Guard with 1169 migrants of various nationalities aboard docks in Palermo on April 14, 2015. (Photo credit: UNHCR / F. Malavolta)

European Union officials held an emergency summit Thursday to craft a plan of action after an estimated 800 people died in a single shipwreck while attempting to cross the Mediterranean Sea from Libya. The mass drowning comes amid a spike in displacements worldwide.

Ahead of the summit, top UN officials in the fields of refugee affairs, migration and human rights urged EU leaders to create “sufficient channels for safe and regular migration … as safe alternatives to resorting to smugglers” and to make “a firm commitment to receive significantly higher numbers of refugees through EU-wide resettlement.”

Many of the migrants who successfully cross arrive on the shores of Italy, Greece and Malta. In a briefing after the European Council meeting, Maltese Prime Minister Joseph Muscat said there were few surprises, with one notable exception.

“There is a very clear political signal that Europe is ready to act on the criminal network that is managing the migration, the illegal migration flows and that is profiting from these innocent people,” Muscat said. “So there is a determination to disrupt these networks.”

Officials also announced the EU will triple its budget for Triton – a border enforcement operation in the central Mediterranean that replaced a search and rescue mission known as Mare Nostrum in November of last year. Some European officials argued that search and rescue encouraged risky migration by giving the impression that help was on the high seas.

“What’s troubling is that the same number of crossings are resulting in 30 times the numbers of deaths,” says Joel Millman, spokesperson for the International Organization for Migration. “So we know the problem is not the crossing itself, it’s not the numbers of people crossing, it’s the recklessness of these criminal gangs and what they’re doing. The boat that carried 850 people this past weekend may last year have carried 100 or 150. We don’t know exactly why this is – if there are fewer boats, if there are fewer people or just that the traffickers are becoming greedier, that they decided that no one is going to punish them and nobody cares about these victims. Therefore: why buy five boats when one boat will do? We know the answer to that. But it is not a problem of too much rescue on the Mediterranean, that’s not the reason this is happening.”