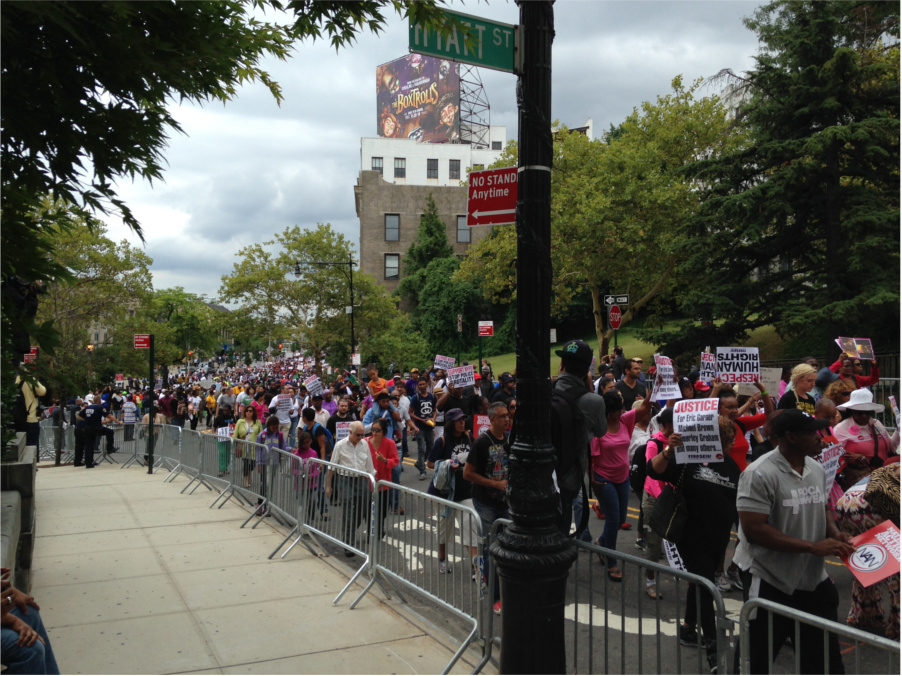 Thousands march and rally in Staten Island, NY on August 23, 2014 calling for police accountability in the July death of Eric Garner. The father of six died after police placed him in a choke hold during arrest.

Funeral services were held Monday for Michael Brown, the unarmed black youth shot at least six times and killed by a white Ferguson, Missouri police officer. Thousands of people – including local residents, community leaders and national civil rights and political figures – attended the services. Reverend Al Sharpton eulogized Brown in a fiery sermon that called for police, and community, accountability. Brown’s family has asked for a day of reprieve from the protests that followed Brown’s death and have persisted now into a third week. Images of protestors demanding answers met by a militarized police with high powered automatic weapons and tanks have flooded the media for weeks.

Michael Brown’s death was one in a series of recent incidents of police shootings and excessive use of force nationwide.

In New York, unarmed Eric Garner died in July after police placed him in a chokehold. Over the weekend, thousands of people attended a mass rally and march calling for justice for Garner’s death. FSRN’s Rebecca Myles attended the event.

The lunchtime rally in Staten Island on Saturday attracted a diverse group of supporters — moms with strollers, hippies with guitars, union members, followers of the Nation of Islam, hipsters, hip-hoppers and a huge posse of adults and children behind a banner for New York State National Association of the Advancement of Colored People. It started late, beginning at Jay Street where NYPD officers Eric Garner in a choke hold. A slow march past the Staten Island District Attorney’s office was followed by a rally near the 120th police precinct, where two police officers have been temporarily relieved of duty.

“We are not here to cause violence, we are here because violence was caused,” Reverend Al Sharpton said in his address to the crowd. “An illegal chokehold is violence. To stand around and watch a man victimized and no one do anything about it is violence. When a man with a video camera shows more regard for human life than those sworn to serve and protect, that’s violence.”

Call and response chants kept time with the rotors of overhead police helicopters. “Hands Up! Don’t Shoot,” “We are the people, the mighty, mighty people,” and “I can’t breathe! I can’t breathe!”

Eric Garner, a father of six, died on July 17 after police placed him in a chokehold while trying to arrest him. Officers accused him of selling untaxed cigarettes. A cell phone video of the incident shows Garner telling the officers, “I can’t breathe! I can’t breathe!” The city medical examiner cited the chokehold and compression of his chest as the cause of Garner’s death.

The United Federation of Teachers and Healthcare Union, SEIU 1199, sponsored the rally. Some of their members are mothers of children killed by police.

“I want the culture in the police force to change where the police philosophy is one life. People need to live, be justice, not injustice,” said union member and Long Island nurse Polly Henry who came to give support to the family of the dead man. “Because we don’t hate the police, we know the police job is tough. I work with the public, too, I know it is tough, but I also know every life is valuable and what I must do to save a life I must do in my job as nursing. Black life is no different than white life, all life is valuable.”

“In this case the charge that would fit most precisely is second degree manslaughter, or criminally reckless homicide or reckless manslaughter,” according to criminal defense and civil rights attorney Ron Kuby, who said under New York state criminal law, the police officer that killed Garner could be charged in a number of ways. “That is to say when one acts with a conscious disregard of a known death and death results you’re guilty of second degree manslaughter. That carries a maximum sentence of five to fifty years in prison, and no minimum penalty. There is lesser charge, criminally negligent homicide, far less serious but it is a felony.

“Much of that type of conduct also can be prosecuted under federal law,” Kuby added, saying the Department of Justice could also launch a federal probe. “In this case because these were police officers, because they were acting with the authority of the state with the authority of the State, of the City, they can be held liable for criminal violation of the federal civil rights code. And in this case what would have to be proven in federal court is that the officer in question intentionally used excessive force in arresting Eric Garner and if you can prove that beyond a reasonable doubt and prove that death resulted and in this case it did, a longer term of imprisonment would result.”

According to the NYPD, there were no arrests on Saturday. Among the demonstrators was a white couple, Bob and Ruth (who gave only their first names), wearing T-shirts reading “One Community, One City, Respect for All.” Ruth said she came “because it is simply unacceptable to use that kind of force on somebody who is unarmed and not even being confrontational, and unless people like us stand up and say it is unacceptable it is going to continue.”

According to attorney Kuby, the only way to hold police accountable for crimes committed against the citizenry is through an independent statewide prosecutor for police misconduct.

“That’s the only way you will get police accountability,” he said, “because local district attorneys are locally elected, they frequently rely on many of the same police officers who are investigating other police officers, and they are very reluctant as a rule to second guess the police involving line of duty killings, sometimes they won’t even present the case to a grand jury.”

As the grand jury probe continues, six New York congressional lawmakers who think there can’t be fair trial in the Eric Garner case given the Staten Island D.A.’s relationships with police have called for the Justice Department to investigate.

Click here to see a slideshow of pictures taken at the event.