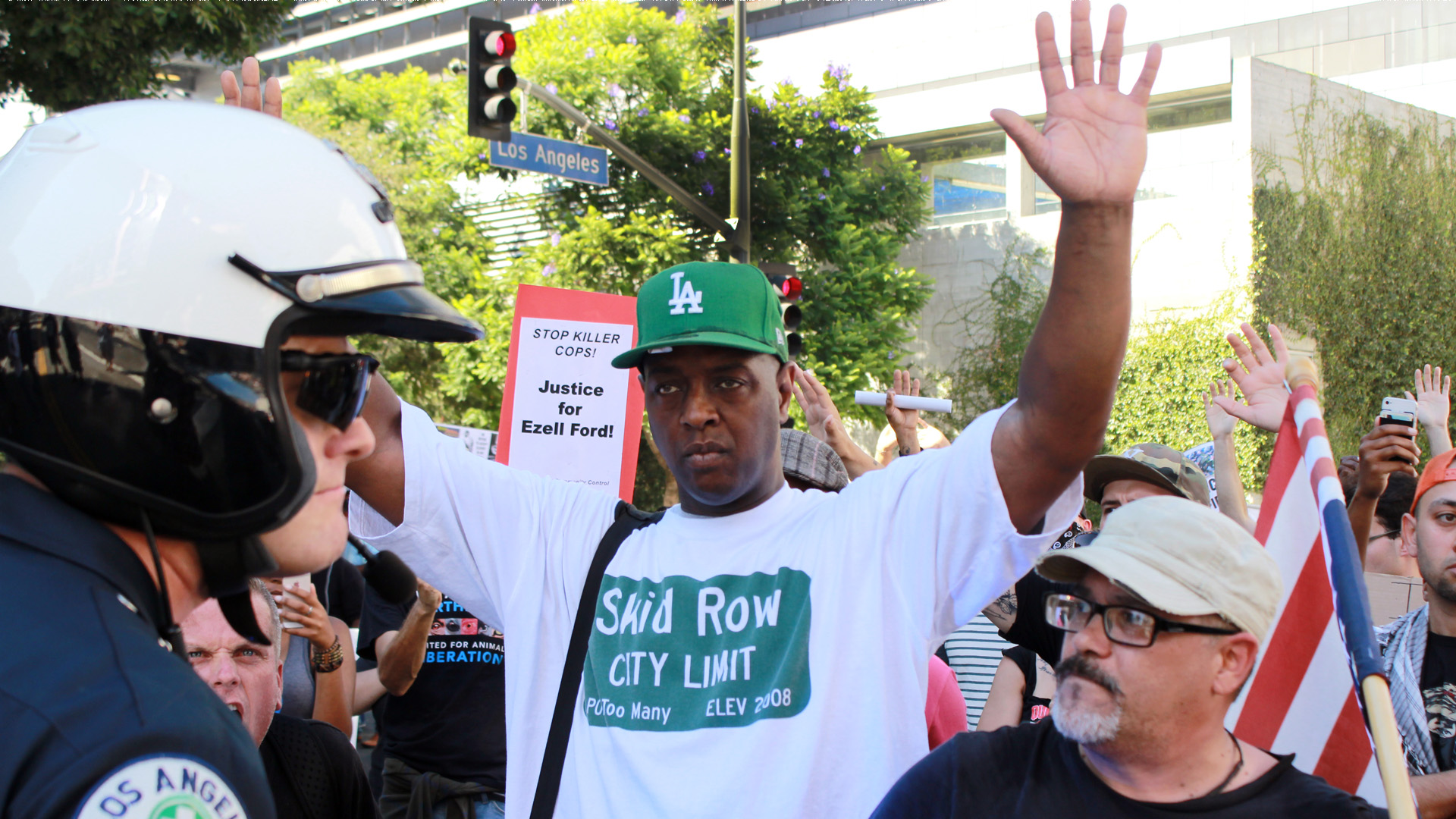 A grand jury investigation into the shooting opened Wednesday. As of yet, Officer Wilson has not been taken into custody, nor is he facing formal charges.

While the protests in Ferguson, Missouri are growing smaller, they have inspired more than one hundred demonstrations around the country calling for police accountability. Lena Nozizwe reports from Los Angeles.

The protests sparked by the shooting death of Michael Brown in Ferguson, Missouri have struck a nerve in Los Angeles. Just two days after Brown’s death, LAPD officers fatally shot Ezell Ford, a 25-year-old African-American man. Police say he ignored orders and walked away after he was stopped for questioning. Ford’s relatives say he suffered from an unspecified mental disability.

The LAPD has delayed the release of Ford’s autopsy results by putting them on “investigative hold.”

When a call went out for a National Moment of Silence on August 14th, hundreds of demonstrators gathered at Leimert Plaza Park in South Los Angeles to show their support for the protests in Ferguson. A Beyoncé look-alike named Alicia Thornton said she was also demonstrating for her family. “I have a little brother and I know that he was constantly like harassed where we lived because I grew up in a white neighborhood,” she told FSRN. “I definitely understand from the beginning. I always have.”

Demonstrations continued over the weekend. More than one thousand local protesters gathered in front of the Los Angeles Police Headquarters on August 17th. Among them was a young woman named Hope, who held a sign bearing the names of Amadou Diallo, Trayvon Martin and Ezell Ford. “It’s about all the names we know and about all the names that never made it into the papers,” she said. “All the people that happened before social media, everybody who happened in small town who didn’t get to be on the news. This has got to stop.”

Protesters like Hope and Alicia say their activism is necessary in 2014; 50 years after President Lyndon Baines Johnson signed the Civil Rights Act into law. The landmark legislation was designed to end segregation and racial discrimination. Chants at the rallies made reference to Jim Crow, a racial caste system that predominated in the US South prior to the Civil Rights Movement. Some argue the system of unequal access to due process is very much alive and deadly, especially when it comes to policing in communities of color.

Dr. Delores Jones-Brown, a former prosecutor and current professor of law at City University of New York, says a reason why race and ethnicity are highlighted in cases of police use of deadly force is because “typically the publicized cases involve black or Latino victims who are killed by predominantly white officers.”

Jones-Brown directs the John Jay College Center on Race, Crime and Justice and has been studying the use of lethal force by police against black men since the 1990s. She says the collection of statistics on police killings has been piecemeal. She adds that her own independent research into a representative sampling of 24 cases over 15 years indicates police officers who have used lethal force are rarely convicted of wrongdoing. “Most of them do not even get presented to the grand jury so the prosecutor makes a decision not to present the case to a grand jury,” she said. Of the 24 cases she studied, “about two of them were presented to the grand jury and the grand jury refused to indict and the four that went trial, there were two convictions at the state level and two convictions at the federal level.”

Outside of LAPD headquarters on August 17th, with a police helicopter hovering overhead, 15-year-old Jay said “the abuse of power by police and the systematic racism” he has witnessed first-hand encouraged him to protest for the first time. He demonstrated alongside two of his high school classmates. “I feel like it’s sort of reaching its boiling point,” he said. “I mean, in the past of course this is never okay and this will never be okay, but I feel like now its reaching boiling where something it’s either going to keep boiling or something’s got to change and I feel like I needed to be part of the change.”

The protests in Ferguson show little indication of letting up, despite a declaration of a state of emergency, a midnight-to-5am curfew and a militarized police response.

Dr. Jones-Brown says she’s happy to see young people participating in a movement emerging around this issue. “I think that is fantastic like we do need to have a lot of different kinds of people to recognize the inhumanity, the unfairness, the unjustness of these situations to see real change.”

Protest organizers in Los Angeles say they are planning to continue demonstrations in solidarity with the movement in Ferguson and in support of Ezell Ford’s family.

The calls for justice and accountability echo around the country where more protests focusing on excessive police force are scheduled in cities this week, including Dallas, New York and Washington DC.

Photo: A moment during an August 17, 2014 protest which started and ended outside of Los Angeles Police Department headquarters. Copyright: Lena Nozizwe. Used with permission.