At least 700 migrants and refugees killed in recent Mediterranean shipwrecks 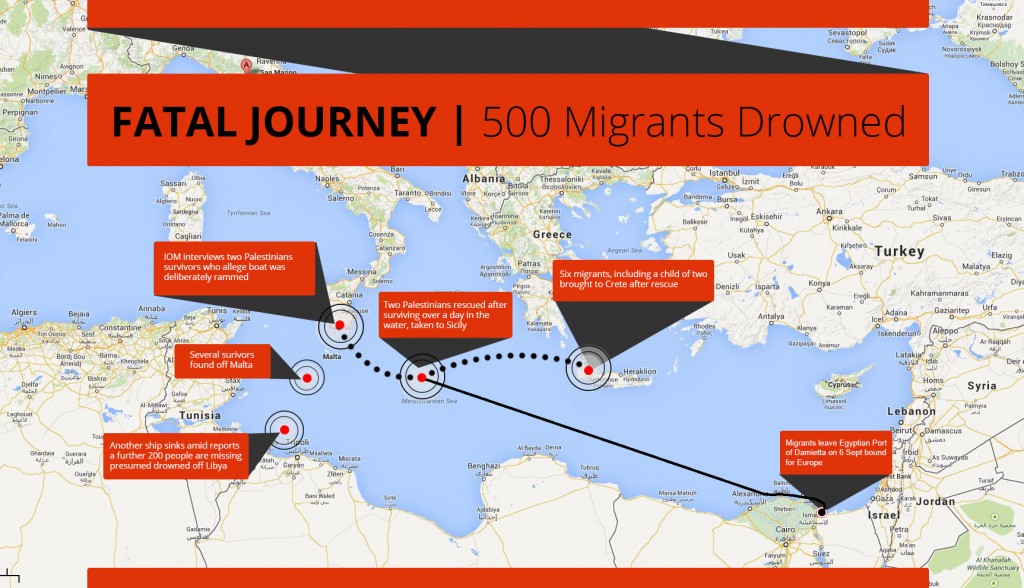 This year is on course to become the deadliest in recent memory for undocumented migrants and refugees trying to reach Europe by crossing the Mediterranean from North Africa.  International migrant advocacy groups believe at least 700 people have drowned in shipwrecks so far this month —  in one recent  case, there may have been as many as 500 passengers on board a single vessel when it sank. That’s according to UN estimates based on survivor testimonies. FSRN’s Shannon Young has more.

At least five ships carrying migrants and refugees from the Middle East and Africa have sunk in the Mediterranean in recent weeks. The deadliest shipwreck occurred about 300 miles off the coast of the island of Malta. Survivors estimate as many as 500 passengers were on board when a second boat piloted by human smugglers rammed into it, causing it to sink. Smugglers had already forced the passengers – who had set out from Damietta, Egypt on September sixth – to change ships three times. Survivors of the shipwreck told investigators from the International Organization for Migration they were refusing to change boats a fourth time due to safety concerns when the ramming occurred.

“There was some kind of scuffle or something happened,” says IOM spokesperson, Joel Millman. “We have different reports, but the traffickers who were monitoring this ship from another smaller ship – supposedly there were about 10 of them just off the side of the ship in another boat – began ramming it until it began to sink. And it sank pretty quickly. There was an almost total loss of life. There have been a few bodies recovered. We have 11 survivors that we know of. And of those 11, eight are Palestinians who we think are all from Gaza. And we have reason to think that most of the passengers on this boat were from Gaza.”

An immigration agreement between Italy and Egypt may give undocumented Egyptians an incentive to claim they are Palestinians. However, Millman says survivors of this shipwreck indicated many of the passengers had received aid money to repair homes damaged in the recent Israeli bombing campaign. Some opted to use those funds to flee to Europe rather than rebuild.

Millman says reckless negligence has become common in the human smuggling trade, but the ramming incident seems like an escalation of violence against migrants that has been steadily building over time. “We’re hearing all those kinds of things all summer and this is the first time anyone has described alleged traffickers laughing as they ram the boat so I would say, yes that seems a first, but something awful close to this has been going on for weeks. So we’ve been trying to call attention to it.”

While the IOM has noticed a spike in Palestinians attempting to enter Europe since this summer, conflicts in other countries have been fueling a massive wave of migration.

The Unites Nations refugee agency, the UNHCR, estimates three million Syrians have fled since the start of the civil war there in 2011.

Carlotta Sami, UNHCR spokesperson for the region of southern Europe, says Syrians and Eritreans make up half of the refugees arriving in Europe via Italy. “We have also Iraqis and Palestinians from Gaza. And what we are calling for is to maintain the rescue operations in place – it’s so much needed at the moment – but also, to pair these rescue operations with a strategy that European countries should put in place. You know, that you offer actions, specific actions, specific programs to refugees to find protection in Europe in a legal way.

This year’s current death toll for migrants and refugees in the Mediterranean is already triple what it was in 2013 and is predicted to top three thousand by year’s end.