Street Beat: Immigration activists call for an end to deportations 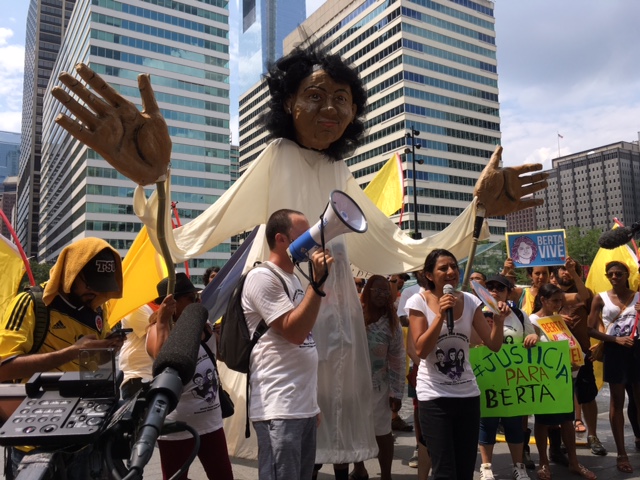 During a march for immigrant rights in Philadelphia, protesters carry a large puppet in the likeness of the late Berta Cáceres Flores, the murdered Honduran environmental activist, indigenous leader of her people, and co-founder and coordinator of the Council of Popular and Indigenous Organizations of Honduras. (Photo credit: Jarone Brown, Grassroots Global Justice Alliance)

Its officially day one of the Democratic National Convention in Philadelphia, and plenty happened prior to the first gavel. At a Monday morning breakfast meeting, delegates from the Florida contingent booed Democratic National Chairwoman Debbie Wasserman Schultz as she tried to address her home state team. And try she did, but unsuccessfully – with delegates chanting the name of her challenger in the upcoming Florida primary.

The DNC chair announced Sunday she will stand down from her post after WikiLeaks released emails documenting the committee’s efforts to undermine Vermont Senator Bernie Sanders’ campaign for the nomination. But within hours of the announcement, presidential hopeful Hillary Clinton named Wasserman Shultz an honorary chair of her campaign team. Until this morning, the Florida congresswoman still planned to gavel the DNC into session and address the convention – but decided against it later in the day.

The embattled party chair wasn’t the only person booed Monday. Senator Sanders was also met with discontent when he called for his supporters to back the Clinton-Kaine ticket to defeat the Republican nominee, Donald Trump. Sanders is set to address the full convention Monday evening.

As the party politics played out, immigrant rights activists from all over the country descended on the DNC to call for an immediate end to deportations and the dismantling of the U.S. Immigration and Customs Enforcement – or ICE. The march was organized by the Philadelphia Migrants rights group Juntos, as well as the #Not1More Campaign. FSRN’s Ariel Goodman was there and talked to participants along the way.

Julie Pilar:  I am Mexican, and I am here because we want ICE to be dismantled. I am the mother of a family, I have a daughter. I will not get tired of protesting, and I am not afraid. We want something for ourselves, and we have the right to that. We have lived here for many years, and we need to feel safe here.

Eva Cardenas: I’m from Atlanta, Georgia and I’m here in solidarity with the It Takes Roots caravan and the Not1More deportation campaign. I’m a firm believer that our people are the ones that know the solutions and unless we take it upon ourselves to do it, no one else is going to do it for us. And so it takes truth, it comes back to our ancestors, right? It comes back to us being here and what it means to indigenous people and black people to be inside this country when we are just constantly under attack.

Laura Zuñiga Cáceres: I am from Honduras. My mother struggled against racism in order to help all people, and think of ourselves as peoples of the world. People who are confronting rhetoric that is often racist, exclusive and stigmatizing. It is all connected because the defense of territories, especially indigenous territories, is a form of of fighting for peoples rights to live in on their own land when they want to, without being displaced by large extractive transnational companies that take over indigenous lands and provoke forced migration. This is also accompanied by the violence created by the companies.

Robert Castille Herrera: I’m an immigrant, a migrant – but I live in Columbus Ohio, I came to join my sisters and brothers here in Philadelphia. We want people from the DNC, specifically Hillary Clinton and President Obama to know that we are not satisfied with what’s happening. We know that there are a record number of deportations. We want to dismantle ICE, We want tot President to start a moratorium on deportations. He’s still president, she still has the power to do that – we demand that he do that.

Christina Acuna Castillo: And I’m from New York. My sign says, one side says “La revolución será para todo el mundo, o no será.” In English that means “The revolution will be for everybody, or it will not be.” And the other side says “También de este lado hay sueños,” which means “On this side, there are also dreams.”