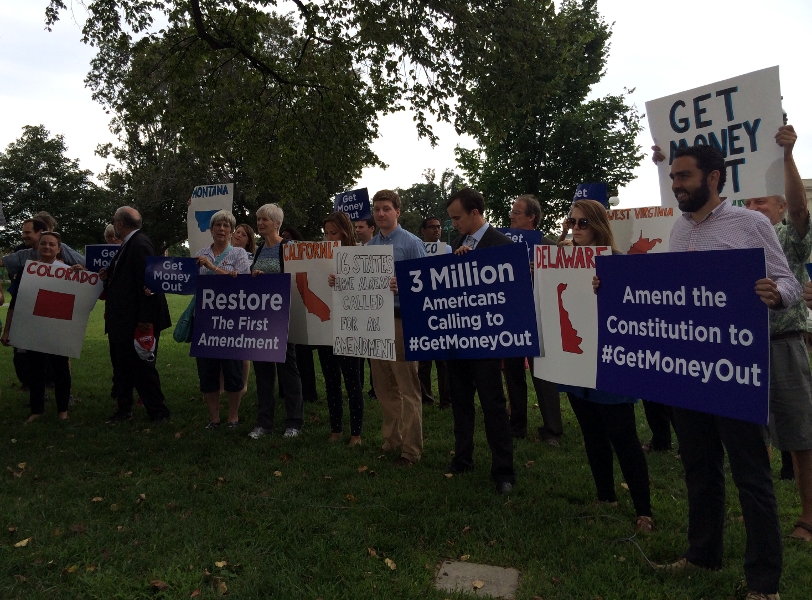 Just days after advancing a measure that would give Congress the authority to cap donations to federal political campaigns, the Senate GOP reversed itself and blocked any further action on the bill. Earlier in week, 20 Republicans crossed the aisle to limit debate on the so-called Democracy for All amendment that sought to overturn the controversial Supreme Court decision known as Citizens United. Ashley Westerman reports from Washington, D.C.

The so-called “Democracy For All” amendment authored by Democratic Senator Tom Udall of New Mexico has a two-pronged approach. One, to give Congress the power to limit spending on federal candidates. And two, to bar the Judicial Branch from overturning any future campaign finance laws authored by the Legislative Branch.

“We are here to say as strongly and forcibly as we can: corporations are not people and we are here to take back our democracy from billionaires who exercise undo influence, from the special interests and from large corporations” said Udall at a press conference outside the Capitol, just hours before the vote on the amendment. “Our elections are not auctions up to the highest bidder.”

“We already felt that moneyed interest, special interests, lobbyists have way too much influence over the decisions that our elected representatives make and, in fact, who can get elected,” Freechild told FSRN. “So we’ve been organizing for a constitutional amendment with thousands of people all over the country since the ruling came down in 2010.”

Political spending by outside interest groups has skyrocketed since the Citizens United decision. OpenSecrets.org reported earlier this year that during the 2012 cycle, non-party outside spending topped $1 billion, with super PACS accounting for more than $600 million of that figure. Further, a recent report by the Wesleyan Media Project in partnership with the Center for Responsive Politics found outside interest group spending for the 2014 midterms has reached $120 million.

A recent poll by Public Citizen found that voters oppose Citizens United by a margin of nearly 3-to-1.

But Paul Sherman, Senior Attorney at the Institute for Justice, says the Citizens United decision was correct because it vindicated the principle “that in America, we don’t leave it up to the government to decide when someone, whether it’s an individual or a group, has spoken too much about political issues. We leave that up to speakers.” Sherman says those supporting the constitutional amendment are violating the right to free speech.

As lawmakers scramble to pass a continuing resolution to keep the government working after the end of the month, and then get out of town to campaign, the Republican maneuver put Democrats on the floor to discuss a bill that the GOP likely had no intention of backing. While the measure may be off the table for now, advocates are confident it will be brought back up for consideration in the future.