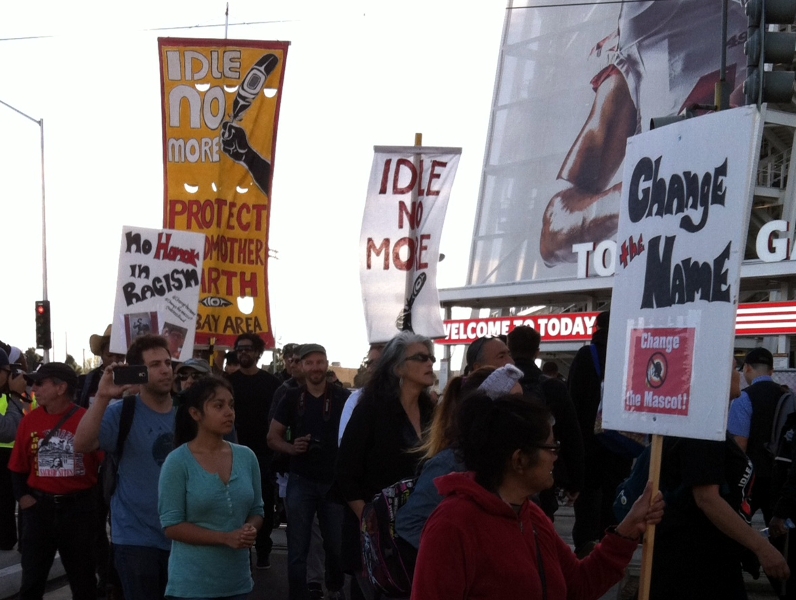 Football season is in full swing, as are renewed calls to change the name of the National Football League team from Washington DC. Earlier this year the U.S. Patent office canceled the trademark registration of the Washington Redskins on the grounds the team’s name is racially disparaging. About 75 to 100 Native American and social justice activists rallied at the 49ers and Redskins football game Sunday in Santa Clara, California. Activists are calling on the National Football League to end the use of racially charged words like Redskins for team names and to end the use of Native Americans as mascots in the league. FSRN’s Christina Aanestad reports.

Indigenous activists have for decades organized to stop the use of what they say are racial slurs for team names and mascots in sports.

Andre Clambit of the Karuk Tribe in northern California says it’s racist to call a team the “Redskins.”

“If this was the Washington N-word or the Washington Jews or any other ethnic minority there would be no question about it that it would be over,” says Andre Clambit of the Karuk Tribe in northern California. He contends the “Redskins” name is racist “because it portrays us as less than we are as native people in the 21st century.”

Many fans of the DC football team adamantly oppose a name change, while some football enthusiasts support changing the Redskins team name.

“Are they blind to where it came from?” asks Josie Rosas, a 49ers season ticket holder who identifies as part Apache. “It’s coming from the bounties of the skins of the redman. The Mexican government they put on a bounty for their skins. The white man on this side of the border did too.”

Not all sports fans who claim Native American ancestry think the Washington DC team should change it’s name. “I think the name should stay the same,” said Thomas Powell, a man with a Caucasian appearance who says he’s part Choctaw and Cherokee, doesn’t have a problem with the term. “I understand what they think Redskin means, they used to scalp us, too. So get over it. Time to move on.” Powell flew from Los Angeles to see the Redskins play.

Indigenous activists aren’t the only ones calling for a name change. The American Psychological Association says the use of race-based mascots and epithets as team names has harmful effects on native youth and reinforces negative stereotypes. American Indians and Native Alaskans have the highest suicide rates in the nation, according the Center for Disease Control’s most recent statistical breakdown on suicides.

For indigenous activist Morning Star Gali, it’s time to move beyond institutionalized racism in the NFL. “That’s what it’s really about, it’s that our children don’t have to go through what I went through, that respect can be shown, that we’re human just like everyone else and deserve the respect not to become these cartoonized images.”

Washington DC’s city council passed a resolution calling on it’s home team to change the name, stating Redskins as an “offensive and hurtful” team name. But, Washington Redskins owner Dan Snyder has vowed to never change the team’s name. Despite his reluctance, educational institutions are acting.

Over the past decade, hundreds of schools across the U.S. have changed the names of their sports team from racial terms alluding to indigenous people, but the professional Washington D.C. football team remains a high-profile holdout.