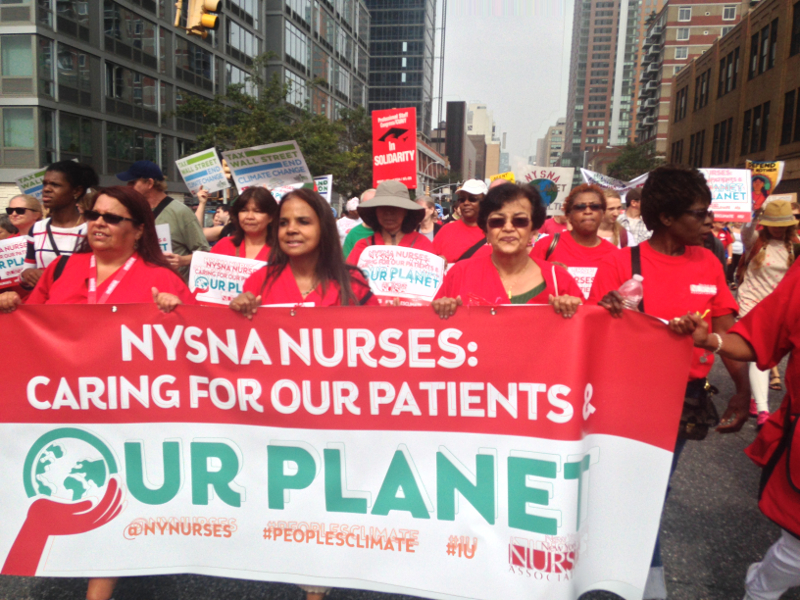 Participation in New York City climate actions today and yesterday exceeded organizers expectations. Around two thousand people staged a sit-in on Wall Street today to draw attention to those who profit from practices that contribute heavily to greenhouse gas emissions. On Sunday, more than 350,000 demonstrators turned up for the People’s Climate March. Organizers had predicted a crowd  one-third that size. Twenty-seven hundred sister events were held in 158 countries around the world from Berlin to Istanbul to Rio.

The actions come ahead of climate-related events this week at the United Nations. Tuesday, 120 world leaders will join business and financial chiefs  for the Secretary General’s specially requested Climate Summit. It will be a non-negotiating session but organizers anticipate that bold and aggressive ideas shared at the summit will lay a framework for the Paris Climate talks in December 2015.

FSRN’s Rebecca Myles attended Sunday’s People’s Climate March, and talked with participants about why they were there.

Frances Vidal, born Paris, lives in the Catskills, New York: Like many other people, small scale, I was caught Irene and then Sandy. I am still recuperating from Sandy due to narrowmindness of the stupid NYSEG electric company who is putting me through torture. The whole world is. What effects you, effects me whether you are in Africa, Asia, or right here in America or South America or India. That’s the tragedy. We follow what’s happening all over the world and we see the scarcity of food coming automatically between all the wars and also where the farmers can longer plant, and also where the rice fields are being effected. California, 98 percent of California is declared under drought already and we have so much food comes from California so I see difficulty in feeding the world.

Rob Martin, New York: I work in the Stock Exchange building, and during Hurricane Sandy our street was underwater and our office was closed for a week so this effects businesses, too. We didn’t know when it would open, we didn’t know if there would be a job to come back to. With 24 US states having a seawater coastline it is a lot of people if ocean levels rise and a lot jobs would be doubtful and have to move inland. It’s really a jobs issue. It effects all of us but I think big business needs to pay for the carbon it puts into the atmosphere so we really need to embrace the carbon credit system.

Madelyn Hoffman from New Jersey Peace Action: For every war, and every tank and every soldier, the US military uses so much fossil fuel it has added to the climate change problem. We use more in the process of waging war then we get in return so it is a net energy loss. We want to see the nation get off oil, and the world and go into renewables. And if we stop the wars we can save those resources too – human, financial, environmental, all those resources.

George, China: It is very interesting that people come out and I like it. It’s about the climate and everything. Personally I don’t believe in the climate change thing, I think the data is too short. Everyone who is talking about it is citing 30, 40, 50 years of data saying their is climate change and earth is out here for 5 billion 6 billion years. We need longer data to conclude. It’s interesting but I don’t full buy the story, that’s it.

Javier Gaston-Greenberg, Brooklyn: Already we’ve experienced Hurricane Sandy the big one but an everyday level, too, there are asthma levels, there’s different contamination pollution where people’s health is being effected and we also think about the future, too. We are just beginning to feel the effects and we are kinda projecting the kind of future what kind of world we want. And knowing that the politicians don’t have the courage or the political will to do it so it’s going to be from us doing all kinds of different types of projects — education, art policy all over, so that’s what we are here for.