Slideshow: Sights and signs from the People’s Climate March

More than three hundred thousand people from all over the country and world marched through the streets of New York on Sunday to demand immediate, substantial action by governments and individuals to limit global climate change. New York’s march coincided with nearly three thousand climate-related events in 166 countries. The march and related events aimed to infuse Tuesday’s UN Summit on Climate Change with a sense of urgency. At the summit, Secretary-General Ban Ki-moon aims to work towards a global agreement that would limit climate change to a temperature rise of two degrees Celsius.

(All photos by Eilis O´Neill. Click any image to launch slideshow.) 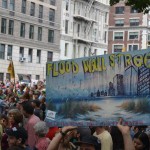 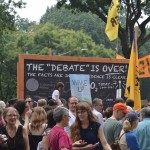 The march was organized into six sectors, including “Frontlines of Crisis, Forefront of Change” (indigenous and environmental justice groups), “We Can Build the Future” (students, families, and elders), and “We Have Solutions” (renewable energy, food and water justice, and environmental organizations). In the “Debate Is Over” sector led by the scientific community, marchers carried a giant chalkboard explaining the science of climate change. 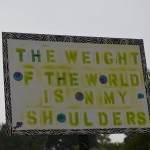 One of many signs at the Sunday march. 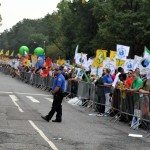 Organizers estimate that 310,000 people participated in Sunday’s protest. At one point, the march came to a halt because the entire 2.2-mile route was full. 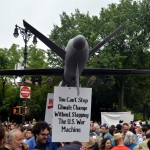 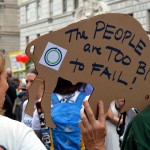 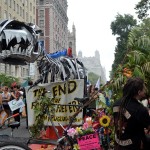 n the bike bloc of the “We Have Solutions” sector of the march, protesters on two wheels rolled a giant dinosaur “fossil” through the streets. At 1:00 PM, protesters held a moment of silence followed by a minute of noise–yells, cheers, whistles, and drums–to “sound the alarm” on climate change. 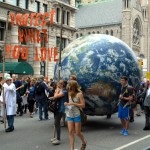 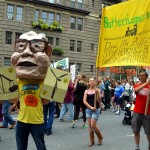 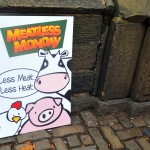 Protesters were still setting out from Columbus Circle, the route’s starting point, two hours after the march began. 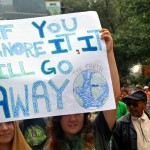 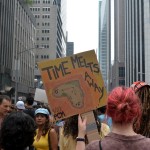 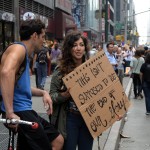 Like many of Sunday’s marchers, Jill Boyd and Joshua Truesdell, from New York, participated as individuals unaffiliated with any organization.