Photos and captions by Elizabeth Whitman. Hear and read the accompanying audio report. 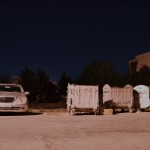 Day and night, trash pickers in Amman, Jordan scavenge dumpsters for scrap materials or used items to sell. Their work is illegal, but they also do the city a huge favor by acting as informal recyclers, finding items or materials of value before they’re tossed into a landfill. 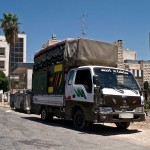 Mahmoud’s leased pickup, which he uses to transport items he finds in dumpsters. (License plate deliberately blurred) Not all trash pickers have vehicles; the less established and poorer ones go out on foot. Mahmoud’s finds one day: a drying rack for laundry, newspapers, scrap metal and a case for displaying food. The scrap metal and newspapers he will resell to a factory and the rest he can resell at local markets. 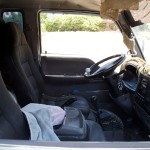 The inside of Mahmoud’s truck. He says he will go out anytime – day or night – and that he works every day. 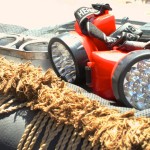 Two of the three industrial headlamps Mahmoud keeps in his truck for when he works at night. These tools of the trade are key to nighttime picking. 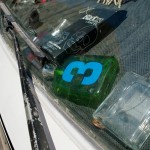 A few of Mahmoud’s more valuable finds: jewelry and perfume bottles. Mahmoud will resell these at local and informal markets where people come to buy used goods and appliances. 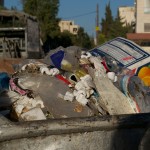 Picking through trash can be dangerous work, with sharp pieces of metal, broken glass and worse concealed in trash bags or other objects. Salah frequently cuts his hands but refuses to use gloves. Wearing them, he can’t feel what is inside a trash bag before deciding whether or not to rip it open. 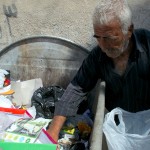 Abu Ali was the only trash worker who allowed himself to be photographed, in part because he has begun working with environmental activist Amal Madanat to increase local awareness about trash workers and recycling. Abu Ali removes the cap from a water bottle. He resells the heavy plastic from which caps are made but not the lighter material of the bottle itself. 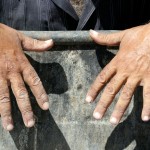 Hands are everything in scavenging. From patting down a black trash bag and determining its innards to pulling, tearing, fiddling, unscrewing and shaking items, a sense of touch is the heart of trash picking. 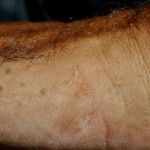 The scar from the time a shard of glass slit Abu Ali’s hand and wrist after he blindly reached into a bag. He immediately went to the hospital for stitches. Far more dangerous traps include used needles and once, a poisonous snake.