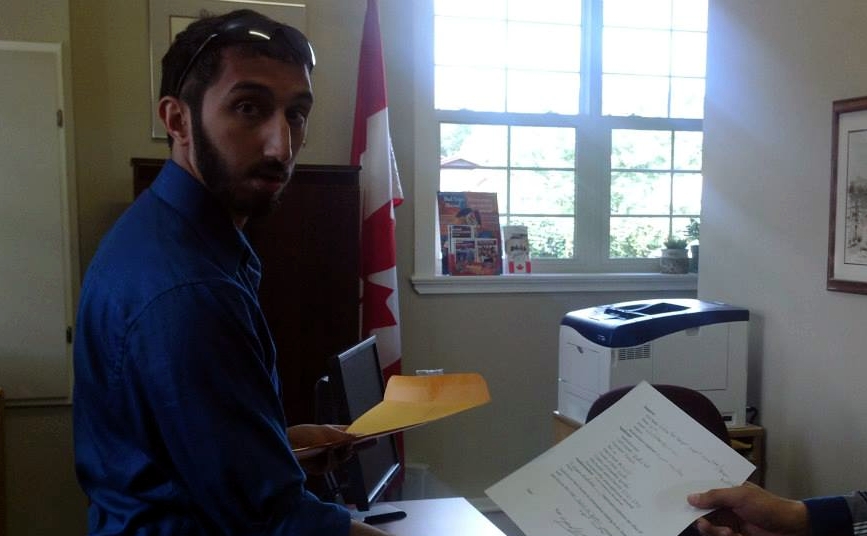 Deepan Budlakoti at MP Pierre Poilievre's office in August 2013 to request a meeting. (Photo courtesy of the "Justice for Deepan" collective)

A new law in Canada makes it possible for Canadian authorities to strip citizenship as a result of criminal activity. The first such case, in which a Canadian born-man’s citizenship is in question, is currently in court and may set an important legal precedent. Erin Hudson has the details from Toronto.

The Strengthening Canadian Citizenship Act – also known as Bill C-24 – became law in June amid widespread criticism from Canadian civil rights organizations. Supporters of the legislation say it streamlines the naturalization process and will greatly reduce the backlog of pending cases. Critics point out it gives the Ministry of Citizenship and Immigration discretionary power to strip citizenship from Canadians convicted of certain criminal offenses.

Toronto lawyer Rocco Galati is challenging the constitutionality of the law. “My challenge to C-24 is simple; that the federal parliament does not have the legislative competence, constitutionally, to take away the citizenship of either a Canadian born on Canadian soil or someone who is naturalized where there was no fraud or misrepresentation in the naturalization process,” said Galati.

The Act outlines certain offenses like terrorism, spying and treason as crimes that would lead to the removal of citizenship and deportation. “Terrorism offenses under the criminal code are very broad,” says Galati. “For instance, if you’re involved in a logging blockade or a protest in downtown Toronto that impedes essential services from getting through like an ambulance, that’s an act of terrorism.”

The attorney argues if the courts uphold Bill C-24, it can turn into a slippery slope. “If this legislation is constitutional there’s no reason why they can’t simply say anybody who commits any criminal offense who has access to dual nationality is going to be banished. There’s nothing, there’s no magic between terrorism and theft over $5,000.”

There’s already a case winding through the federal court system which could result in the deportation of a lifelong resident of Canada.

Deepan Budlakoti was born in Ottawa 25 years ago. Up until his incarceration for firearm and drug convictions four years ago, he had never doubted his right to Canadian citizenship. That changed after one conversation with a prison guard.

“I got in an altercation with a guard over my newspaper and when I was in segregation a white guard came up to me and asked if I was a citizen,” he told FSRN. “I told him of course I was a citizen. Once I was released from segregation, CBSA came and seen me saying that I’m not considered a citizen, even though I have a Canadian passport on several occasions as well as a Canadian birth certificate. They came back to me after a month stating that my passport was given to me in error.”

The Canadian Border Service Agency’s case against Budlakoti rests on a rare set of circumstances. A person born on Canadian soil automatically qualifies for citizenship with one exception: if the parents are part of a diplomatic mission.

Budlakoti filed a case to the federal court in Ottawa assuming the court would look at the evidence and declare him a citizen. Attorney Yavar Hameed, who represents Budlakoti, explains the request rested on the basis of two factors.

“One was that, factually speaking, the government got it wrong, that in fact Deepan’s parents were not working for a foreign embassy at the time of his birth,” explains Hameed. “That was one of the grounds that we provided new and fresh and I would submit, compelling evidence on that point. The second was basically that even if he is not a citizen there is still responsibility on the government of Canada to do something to integrate him as a citizen in Canada because effectively it’s because of Canada’s error that he was treated like he was a citizen for two decades and then unilaterally stripped of that status.”

The judge ruled in September that Budlakoti’s citizenship had been granted in error and his attorneys are now considering an appeal.

Attorney Yavar Hameed says the political climate created by Bill C-24, the Strengthening Canadian Citizenship Act, impacted the success of his client’s application: “The spokesperson for the Minister has said this publicly — if Deepan wanted to remain in the country he should have chosen another life path and really it’s of his own doing that has rendered him — and they’re not using the word stateless, but effectively that.”

The Ministry of Citizenship and Immigration declined an interview request, but commented in a written statement that the Budlakoti decision is “in line with the recent reforms to the Canadian Citizenship Act.”

Galati’s challenge to the Act is scheduled to be heard on its merits in a Toronto courtroom on October 23rd. The Strengthening Canadian Citizenship Act remains in effect in the meantime.