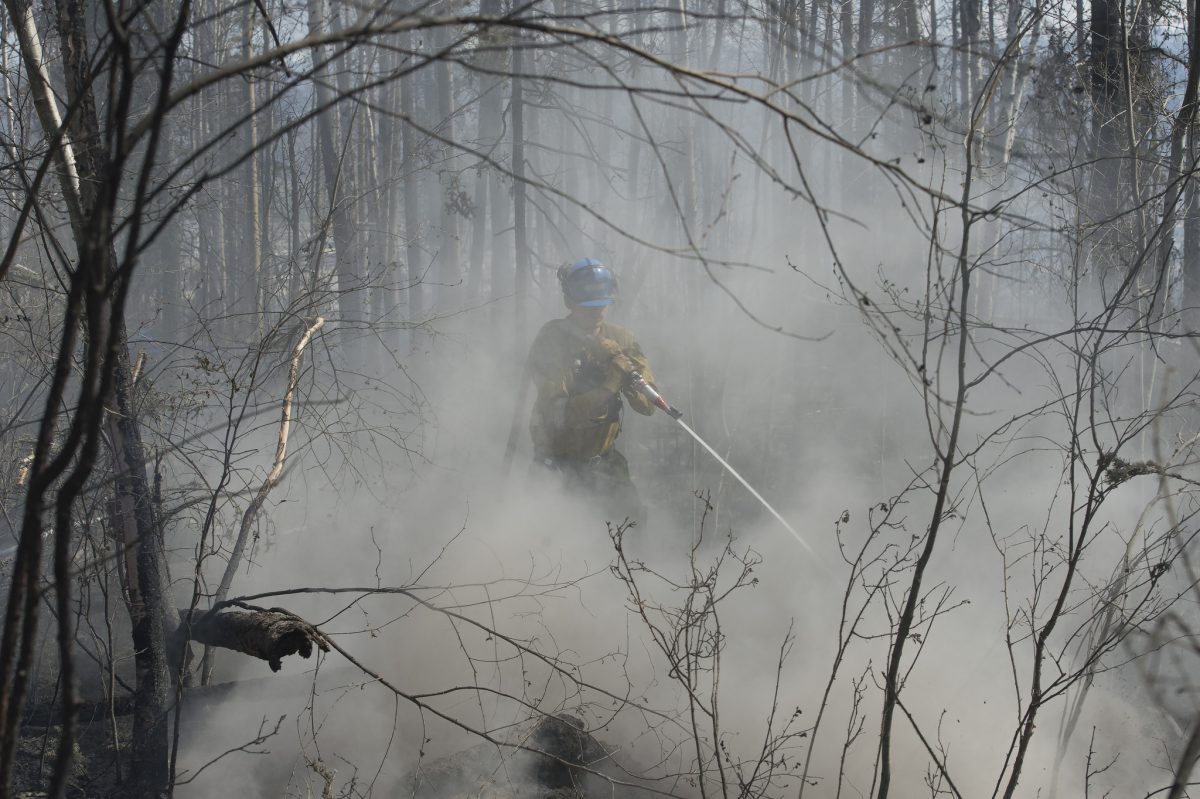 One of over 1,500 members of Wildfire Management Alberta's Wild Mountain Unit hoses down a hotspot in Fort McMurray. (Photo credit: Chris Schwarz/Government of Alberta via Flickr / Creative Commons)

The Fort McMurray wildfire, nicknamed “The Beast,” has grown to more than 550,000 acres and continues to burn across the north east of the Canadian province home to the tar sands. An evacuation order remains in effect for the regional oil worker hub of Fort McMurray and climate conditions across the province continue to favor fire. Samantha Power reports from Edmonton.

It will be weeks before Fort McMurray residents will be able to drive north up the 1 Highway to assess the damage from the massive fire that forced the evacuation of over 90,000 people living in and around the boom town closest to the Alberta tar sands.

One week later, smoke still hangs over the northern town. As the wildfire moves east across the boreal forest toward Saskatchewan, it has grown to an area of more than 566,000 acres. Over 1,500 firefighters remain on the ground.

The full scale of the damage remains unclear and the big questions of rebuilding and restarting loom without any certain answer.

Alberta Premier Rachel Notley met with oil sands executives Tuesday to begin talks about resuming work in the facilities north of the city.

“While thousands of lives will never be the same, we can take small steps to getting back the rhythm of Northeast Alberta,” Notley says. “For many in Fort McMurray, that means rolling up the sleeves, returning to what they love, which is working in the energy sector. We are strong and we are resilient here in Alberta and together government and industry will get through this and  return to providing North America with the energy it needs.”

Few oil producers went through a full shut down, but overall production was cut by approximately one million barrels per day throughout the emergency as workers fled the area. Oil production has slowly restarted, but it could take weeks to return to previous output levels.

But some question if the facilities should even return to full production capacity. Many environmentalists regard the mining and refining of tar sands as the dirtiest form of oil production and draw a direct line between the industry and climate disasters in the region.

Greenpeace campaigner Mike Hudema says forest fires in the province have become much more destructive in recent decades and that this latest disaster should be a wake up call for the Alberta and Canadian governments.

“They put a cap on the emissions coming from the tar sands sector, which is the biggest source of greenhouse gas emissions in the province” explains Hudema. “But they’re still not in line with what the science is telling us we need to do to stabilize this problem.”

But for now, industry and government are focused on getting the tar sands back up to full production. The energy sector is the province’s economic engine and even tepid calls for change to the status quo can prompt fierce backlash at the local level.

At the height of the blaze around Fort McMurray, industry directed resources to housing evacuees in work camps and flew out 20,000 people trapped north of the town as the fire crossed the highway.

Steve Williams, President and CEO of Suncor, an energy company with extensive facilities in the oil sands region, told reporters this week that area safety conditions and workforce availability will determine just how quickly operations can return to normal.

“The restart is very distinct from the city of Fort McMurray itself,” Williams says. “You’ll see us getting back some of the operations back very quickly and then it gets a little bit tougher as we get down towards Fort McMurray.”

Within Fort McMurray, the wildfire destroyed some 2,400 buildings, but fire crews saved 85 percent of the city, including major structures like the main hospital and many schools.

Even so, it’ll be at least two more weeks before residents can return. The evacuation order remains in effect, save for emergency crews and national police. As health and safety is determined, crews will assess the full level of damage the town has sustained.

Over 12,000 evacuees have registered with authorities in Edmonton, Alberta’s capital city.

While private housing and other forms of support were volunteered in the immediate emergency, the long term looks more uncertain. That’s especially true for the thousands of temporary foreign workers that had been living in Fort McMurray to work in the oil economy without permanent residency status.

Meanwhile, the cause of the massive fire is still under investigation and may never be determined. What is known is that the blaze has, for now, displaced some 90,000 people and Alberta faces some difficult questions about how to balance its energy sector against its more volatile climate.