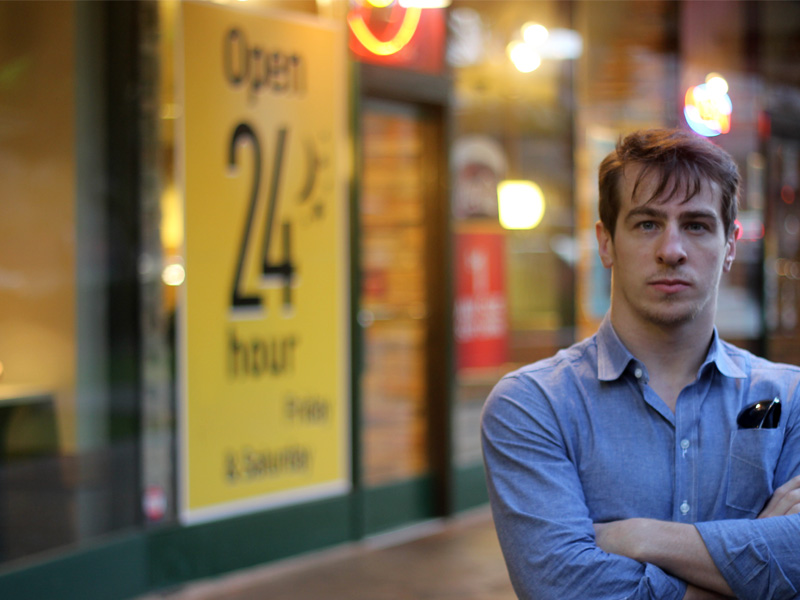 Reservation agent James Russell is one of thousands of LA hotel workers who would benefit from wage hike. (Photo credit: Lena Nozizwe)

A measure in Los Angeles that will boost the minimum wage for workers at the city’s largest hotels is headed for the mayor’s desk. The L.A. City Council approved an industry-specific wage floor Wednesday that – once implemented – will be one of the highest minimum pay rates the country.  Lena Nozizwe reports.

The official vote by the LA City Council Wednesday means that starting next year the minimum wage for workers in the city´s largest hotels will be 15 dollars and 37 cents an hour. That’s more than double the federal minimum wage. California’s state minimum wage is nine dollars an hour.

Twenty six year-old hotel reservation desk worker James Russell is one of the thousands who stand to benefit from the raise. “It would mean that I would only have to work one job,” he told FSRN. “It would mean that I would not have to hit up my mom and my grandmother for money just trying to make rent. I could get ahead on my credit cards. I could start paying off my student loans. I’ve got $30,000 in student loans I’ve got to start paying off. So it would make me financially independent.”

Proponents of the measure argue the city has long supported the big players in the hospitality industry with multimillion-dollar tax breaks. The rate hikes are only mandatory for hotels with more than 150 rooms.

“I like my employees. I get to know them. I get to know their families,” comments Richard Weintraub, owner of the landmark Sportsmen’s Lodge. He says he is already paying his employees more than 15 dollars an hour because he believes it is the right thing to do. “Long term I don’t want them to struggle. I don’t want them to have to come to work sick because they can’t afford lost wages. Last week I met an employee at another hotel who had a 102 degree fever and stomach flu who had to go to work because she was afraid to get fired.”

Debate over the ordinance came with the usual opposition from business groups. At city council meeting in late September, John Howland from the Center City Association warned that wage hikes will mean job loss: “This ordinance threatens our economic growth in several ways. Hotels will cut back on staff and those staff who lose their jobs, their sky will fall. New investment in hotels will be cut substantially. We know of at least three projects in downtown that will left, that ended. Those were jobs in construction in the hotels that will never occur. And the convention business will suffer because the city will not have the critical masses of hotels needed.”

But the sky has not fallen in other cities with living wage mandates, including in Santa Monica where one has been in place for 13 years.  “Yes, we were warned that the higher wages would undermine development in the city and slow down our growth, but that has not been the case,” says Santa Monica mayor,  Pam O’Connor. “Instead development is robust. Tourism and our local businesses are as successful today as they have ever been.”

Mayor O’Connor believes increasing the minimum wage should be approached in a regional fashion, rather than making changes in Los Angeles County city by city.

Earlier this year President Barack Obama called for a minimum wage hike to 10 dollars and 10 cents an hour during his State of the Union address. But so far it has been local politicians, from New York to LA, that have taken up the banner of wage hikes for those who earn the least.