Mass graves uncovered in Mexico during search for abducted students 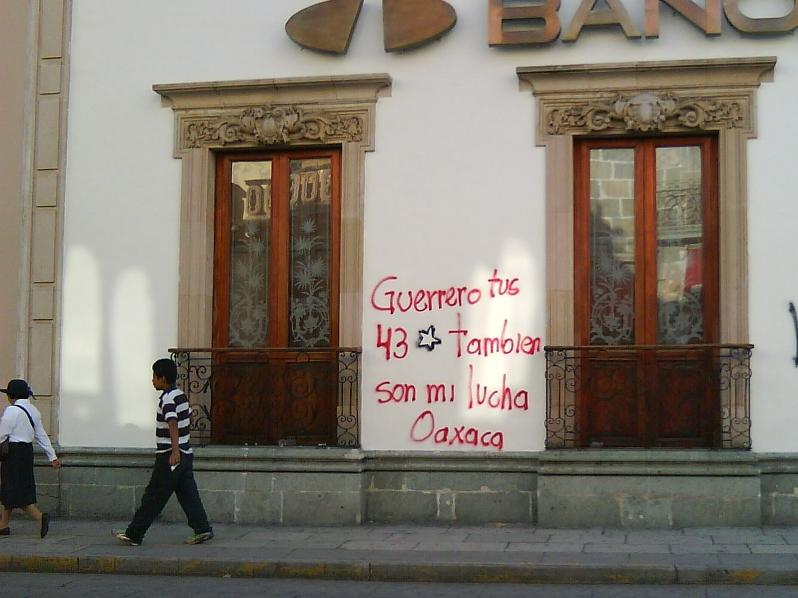 Graffiti on a wall in Oaxaca City reads "Guerrero, your 43 are also my fight." (Photo credit: Shannon Young)

In Mexico, investigators have uncovered a series of mass graves in the state of Guerrero, where 43 students went missing late last month after police and plainclothes gunmen opened fire on buses. Witnesses say police took at least 20 students into custody after the ambush and their whereabouts are unknown. The mass graves have so far yielded 28 bodies – 17 of them are said to be missing students – though DNA results are still pending. For more on the story Nell Abram spoke with FSRN’s Shannon Young in Oaxaca, Mexico.

Nell Abram: First, can you sum up the events that led to the discovery of the graves?

Shannon Young: Sure. On Sept 26th, a large group of students from the Ayotzinapa rural teachers’ college went to the nearby city of Iguala in the the state of Guerrero to raise funds in town. That night they boarded buses to go back to the teachers college. Depending on which version you believe, they either asked local bus drivers to give them a lift or they took over the buses en mass, not really giving the drivers much of a choice.

Local police opened fire on one of the buses carrying students form the teachers college. In a separate incident that same night, police or gunmen – unclear who – fired on another bus carrying students. But they weren’t the students from the teachers college, but rather student athletes from another school. Seems like a case of mistaken identity. In all, six people were killed, and between 10 and 25 were wounded, depending on the source.

In the confusion, many of the students scattered. Some stayed together and met back up at the school, others went into hiding for a few days, and others still were – according to eyewitnesses – taken into custody by local police. By early last week, it became apparent that 43 students were missing and believed to have been abducted by corrupt police.

Students and relatives of the missing staged protest and blocked a highway calling for the missing to be returned alive. Later 22 local police from Iguala were arrested. On Saturday, forensics investigators began digging a site outside of town that had become a dumping ground for bodies. And that’s where things stand: 28 people have been pulled from those graves and supposedly 17 of them are students who have been missing.

Nell Abram: According to the Guerrero state attorney general, 17 of the 28 bodies belong to the students that went missing late last month. Who are the others?

Shannon Young: We don’t know. And it’s not even completely clear that 17 of the students were found in the graves because of the state the bodies were found in. DNA tests are still pending to confirm those identities with certainty.

Nell Abram: Is this the first time local police in Mexico have been implicated in a massacre?

Shannon Young: No. Around this time last year, the disappearance of two federal investigators in the state of Michoacan led to the arrest of local police in a town there near the state line with Jalisco. In that case, confessions from detained police led to another mass grave site in the town of La Barca, Jalisco. More than 60 bodies were discovered there. It wasn’t a massacre as in a multi-homicide all together, but 60 bodies and the police knew where they were. So, that’s definitely implicated in multiple, multiple deaths even if not at the same time.

Now, as far as a massacre goes, there’s also another case from this summer in which soldiers allegedly killed 22 people at close range in the town of Tlatlaya in Mexico State and later altered the scene to make it look like there had been a shootout.

Nell Abram: What comes next in this case?

Shannon Young: Well, even if 17 of those pulled from the mass graves this weekend are students from the Ayotzinapa college, dozens remain missing. It’s to be expected that their classmates and their relatives will maintain pressure on the authorities to get answers to this crime so that it won’t fall of the radar and be so easy to sweep under the rug. This isn’t the first massacre that’s happened in Mexico and it’s certainly not the first time mass graves have been discovered. But it’s to be expected that they’ll keep up pressure. They’ve called for a national day of solidarity in Mexico on Wednesday, which will likely serve as a barometer of public sentiment about this case.