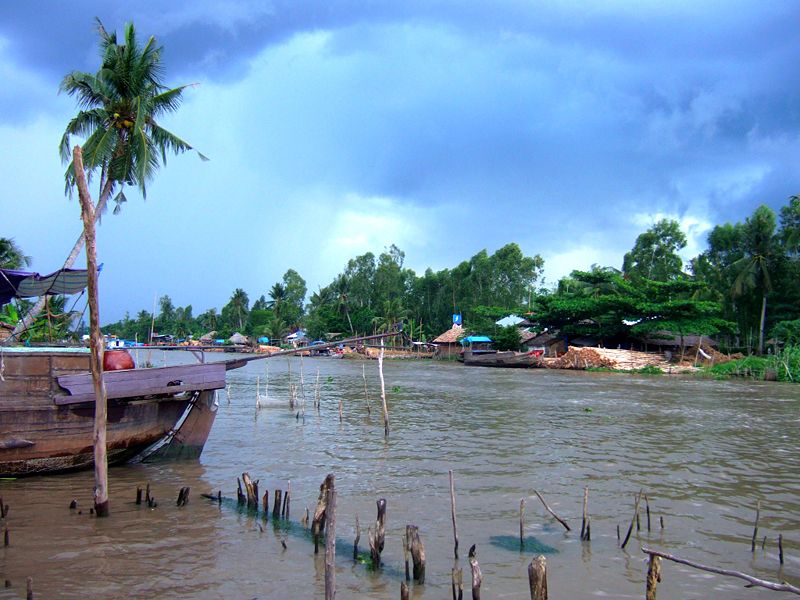 In Cambodia and Thailand, local fishing communities in the path of a series of planned hydroelectric dams along the lower Mekong River continue their call for a halt to dam development until the completion of environmental impact studies. As Ron Corben reports community leaders and environmentalists say disrupting the water flow will affect millions due to the dam´s impact on fish migration.

The latest campaign against dam construction on the Lower Mekong River has brought together networks of local fishing communities whose livelihoods depend on the free flowing waters of the lower reaches of the 2700-mile-long river. Currently as many as 11 dams are planned for the Lower Mekong which reaches from Myanmar and Laos, acts as the natural border between Thailand and Cambodia and flows through Vietnam’s river delta to the South China Sea.

In northern Laos construction is underway on the $3.5 billion Xayaburi Dam. There’s also a planned 260 megawatt Don Sahong dam near the border of northern Cambodia and Thailand. The Xayaburi Dam is being built by a Thai construction company with financial backing from Thai banks. Almost all the electricity produced is to be sold to Thailand.

“We try to push the governments, especially the Cambodian government and other countries to study, to stop the dam along the Mekong River, especially the Don Sahong because it is near the Cambodian border with Laos,” Savath explains. “This will have a lot of effect to the fisheries. We are joining together especially from Cambodia networks, Thailand, Laos and Vietnam. We plan to connect to Myanmar.”

In a major study, the Commission that brings together officials from Laos, Thailand, Cambodia and Vietnam warned damming the Lower Mekong could reduce fish stocks by up to 300,000 metric tons a year.

Scientists say the Don Sahong dam would impact vital fish migration as the area is the only secure fish passage during the region’s dry season. They also warn the dam would be a direct threat to the endangered Irrawaddy dolphin.

But some proponents of the dams, like Jason York with Bangkok-based SCB Securities, say Thailand’s financial sector hasn’t supported domestic power development, and a reliance on gas from Myanmar has led Thailand to look to Laos as a source of electricity.

“It’s the lack of investment in improving power generation here in Thailand,” according to York. “The exponential growth in demand for power and some of this tapping into what is Asia Development Bank and foreign direct investment money going into countries like Laos to harness some of their hydro power.”

But any dam construction on the lower Mekong in Laos also affects Thailand as several rivers are tributaries of the Mekong mainstream. In northeastern Thailand’s Ubon Rathchathani province the Pak Mun River communities fought for 30 years against a dam and – after its construction – have struggled to make authorities open flood gates at regular intervals to allow fish to flow in from the Mekong.

Leader of the Pak Mun river community, Sompong Viengchan, says they know from experience that dams affect fish stocks and the livelihoods of those who depend on them.

“I can say very clearly that any dam that is built on the river, like Mun River when they cut us off from our own river,” says Viengchan. “And it’s going to be the same about the Mekong as well. The Mekong is the River of us all. If the Don Sahong really happen, the Pak Mun people cannot live as well, it will immediately affect us.”

In Cambodia, six million people depend on fish and food security from the Great lake, or Ton Le Sap.

Long Sochet, leader of the Ton Le Sap Fisher network says the communities fear the future if the Don Sahong dam goes ahead as fishing is their main livelihood.

In the Cambodian capital of Phnom Penh in early September, activists rallied against the Malaysian-based investors backing the Don Sahong dam project, gathering some quarter of a million signatures and thumb prints to press for the project´s suspension.

In June, Laos did agree to participate in a prior consultation process (PNPCA), seen by observers as a concession by the Lao government in the face of rising criticism over the Don Sahong dam.

The government of Vietnam – the most downstream of the countries which share the river – has voiced opposition to the projects, citing concern about how restricted fresh water flows into the river delta could affect the country’s chief rice growing area – and by extension, its food security.

At an April summit of Mekong leaders, Vietnam called for a 10-year moratorium on all damming projects on the Mekong mainstream. Vietnam’s state controlled media says dams on the Mekong River were already affecting farming, as water flow was disrupted, leading to increased salinity, less soil run off – valued as a natural fertilizer, flooding and lower fish stocks.