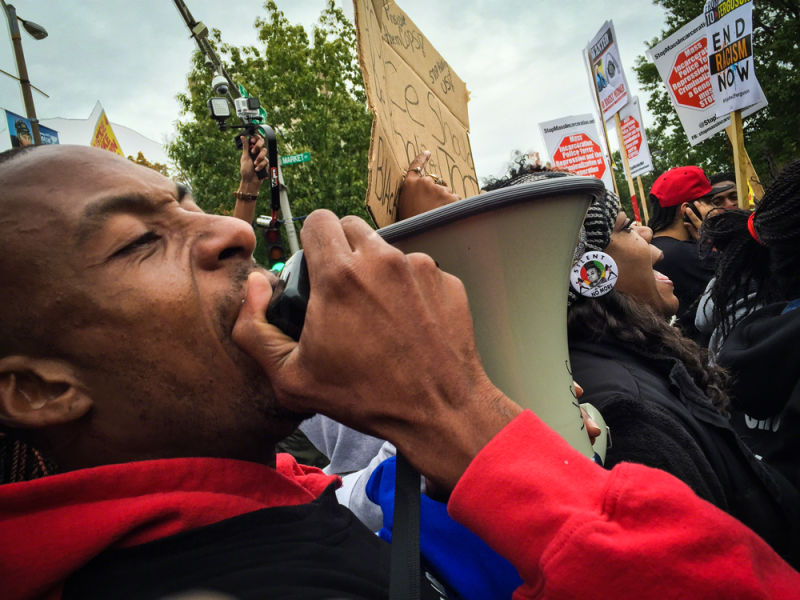 Ferguson police arrested clergy members and prominent intellectual, Dr. Cornel West, during an act of planned civil disobedience outside of Ferguson police headquarters today. The action capped off a weekend of protests, workshops and cultural events organized under the banner of “Ferguson October,” which drew anti-police brutality activists from around the country to Saint Louis County.

For more on the story, FSRN’s Shannon Young spoke with Elon James White – Host of “A Black Show” and CEO is This Week in Blackness Media – who is on the ground in Ferguson, documenting the events and the context behind them.

Shannon Young: First, Ferguson October events began on Thursday with a march to protest the most recent fatal shooting of an unarmed black teen by police in Saint Louis County. Events wrap up today with a “Moral Monday” rally in front of Ferguson Police headquarters. Can you describe what just happened there?

Elon James White: Sure. Well one, it didn’t start on Thursday. There have been marches for the past 50-plus days since the killing of Michael Brown. There have been various protests and events happening. That particular event just so happened to be before the scheduled Weekend of Resistance that was scheduled from the 10th to the 13th. As of this morning, there was a march from the Wellspring Church, which is approximately three or four blocks away from the Ferguson Police Department, led by local clergy here from all denominations. And they marched on the police department and they basically via bullhorn prayed for the police department and asked them to repent for the senseless killings of various black youth that have died by the hands of police officers.

Young: You were in Ferguson at the height of the protests in August and are back there again for Ferguson October. Have you noticed any striking differences or transformations?

White: The biggest thing is that there’s a lot more organization coming down from the grassroots. Initially, people were coming outside and they were responding to the tragedy which was the killing of Michael Brown and it was a lot of raw emotions from there. But as of now, the emotions are still raw, but there’s a lot more organization, a lot more tactics being used in order to make sure that people understand that this isn’t going to stop and as long as injustice here remains, people will be out on the streets, protesting against it.

Young: People from around the country traveled to the St. Louis area to participate in this weekend’s events. What’s your takeaway from Ferguson October?

White: It’s hard to kind of sum up the whole thing. There’ve been various actions and there have been various types of actions. There are the organized actions by some of the organizations that have been a part of it and there are actions that are done by the youth and the grassroots that have stepped up and decided to lead themselves as opposed to falling in line with the civil rights organizations that normally lead in these types of arguments and situations. So, the fact is this was an example of a lot of people coming in to show that they wore standing with Ferguson and St. Louis in general against police brutality and hopefully an example of the tone and I guess the frustration of the country itself, because it’s not only happening in St. Louis. This just happened to be a focal point, a flash point if you will, of the overall march and the overall movement and the fact is that people are just tired of what’s happening and that’s what you’re seeing the most of. And so, I guess the takeaway from the weekend is that simply people aren’t going to take this anymore.

Young: On your Twitter feed, you wrote that what’s most intriguing about what’s happening in St. Louis is the refusal to be lead by old civil rights groups. You touched on this a bit in your previous answer, but can you explain more about what you mean with this statement?

White: The fact is there has been a split from a lot of civil rights organizations in the past decade or two and a lot of folks, myself included, have critiqued civil rights organizations saying that they don’t really speak for them. There’s been a disconnect between what some might consider black leaders and the black community. Not to say that all the all the community believes that, but there is a disconnect with parts of it. And so what you’re saying and Ferguson is a prime example of folks deciding that they no longer want to be apart of that. They no longer want to be told and led by people who have been the previous leaders, especially as they watch themselves lie dead on the street – like literally lie dead on the street – the old speeches and song and dance around these things aren’t working.

It’s been a long time since the initial civil rights movement and so people are looking for more change. They don’t want to be pacified. They don’t want to be told that if they do a certain thing or they live a certain way then all of a sudden, they will be treated as humans. They want to be treated as humans no matter what because we are. And so, what you’re seeing here is people stepping up in leading themselves and rejecting the spaces of other leadership that, you can join them if you want, but you will not lead their movement.

Young: Elon James White, anything else you’d like to add on this topic?

White: I would like to say this. In the midst of the action where the clergy were being arrested, I noticed something that I feel has to be a discussion with the media itself as well; the idea of how media covers things and how media actually steps up to be a part of this. Obviously, the story need to be told, but at same time, the coverage does not outweigh the story itself. Media was actually being told repeatedly to please back up as this planned action with the police officers was happening and media refused. The people would not step back, even as they were being asked time and time again. If we’re going to talk about this and we’re going to cover this type of events, then we’re going to need to learn to treat these events not like just simply it’s a story, but realize this is a struggle and we are just witnesses to that struggle.

Elon James White is the CEO of This Week in Blackness Media. He spoke with Shannon Young by cell phone from outside of Ferguson police headquarters in Ferguson, Missouri. He tweets at @elonjames. You can read special coverage of Ferguson by Elon James White and others at RH Reality Check.