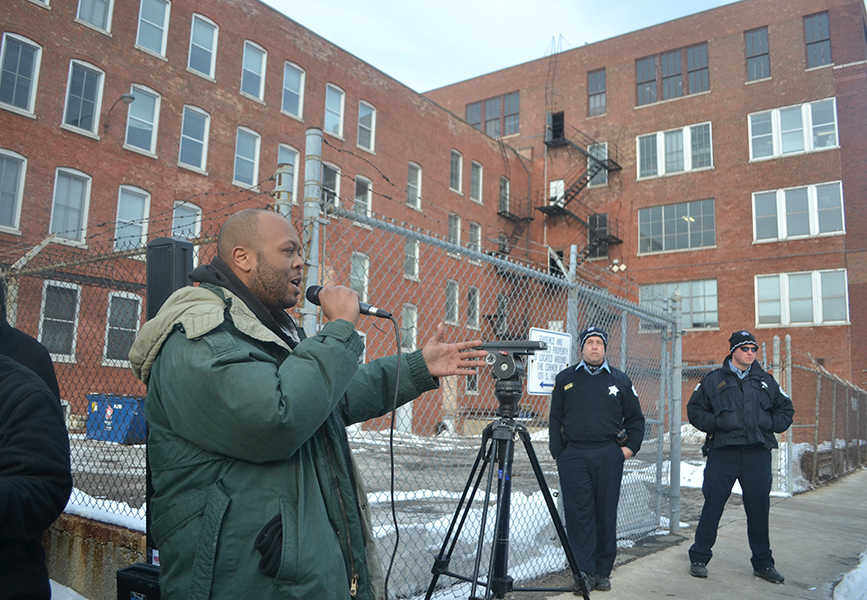 Community organizer Rush Perez addresses the police to his right, ''We are human beings above everything. How can you guys sit here and condone that this inhumanity and this police state go on?''

Several dozen people gathered this past Saturday in front of the Homan Square Police Warehouse on Chicago’s West Side to protest allegations of inhumane treatment first reported last week by The Guardian. According to the investigation, the Chicago Police Department used the large building at 1011 South Homan Avenue as an off-the-books facility where arrestees have been held incommunicado and suffered physical abuse.

The CPD replied to the allegations Sunday in a three-page statement. According to the police: “Homan Square is a facility owned and operated by the Chicago Police Department since 1999. It serves a number of functions, some of which are sensitive and some of which are not, however it is not a secret facility.” The CPD said allegations of abuse inside Homan Square are “offensive” and “not supported by any facts whatsoever.”

Allegations of police abuse in Chicago go back decades. The latest scandal drew a group of protesters to the site on Saturday. For this edition of Street Beat, FSRN reporter Theresa Campagna asked protesters if they were surprised by what The Guardian reported.

Scroll down for photo essay

Rush Perez, The Real World Order: “Actually I’m not surprised at all there’s a black site. There’s been a lot of news and a lot of things that have been told since the 1960s about these government secret sites that they hold and detain Americans. Apparently it’s been going on since the 1960s so I’m not surprised but I figured the modernization of America and the fight for human rights that our government would actually realize and try to help human beings instead of putting us behind secret bars.”

Otis Buckley, Total Black-Out For Reform and Anonymous: “It does seem like the police officers m.o. – still somewhat shocked though because I would hate to think that’s going on here in Chicago. So I’m still somewhat optimistic that this is false. Hopefully this is untrue and if it is untrue, I see no reason why they wouldn’t let us in this building today to inspect it.”

Barbara Lyons, World Can’t Wait: “I still was clinging to the last shred of hope that our country was better than it is. And we are no different than – we maybe don’t machine gun people in the streets yet or but we’re slowly slowly getting militarized police. It’s creeping. And I’m scared. I’m scared for my children and grandchildren. And I think I’ll hold out. Things will still be okay by the time I die. But I’m not so sure about my grand-kids.”

Anonymous woman with First Defense Legal Aid: “I wanna stress that this is not an isolated incident. This is what occurs in every police station. People are denied access to phones. To obtain a free attorney that First Defense Legal Aid provides. We want to stress that we need to bring to light the culture in police stations where people do get disappeared. Where people are not logged into the database and where attorneys have a hard time locating detainees or clients. So we urge the city of Chicago to push legislation to secure people’s constitutional rights and have immediate access to attorneys. And allow people to make phone calls.” 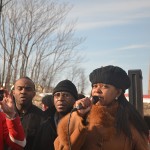 Twenty-fourth ward Alderman candidate Vetress Boyce told the crowd, “We hear a lot of what goes on in our neighborhood and in some cases we have stopped marching, we have stopped fighting for those that matter,” she said referring to the community surrounding Homan Square, which is majority African-American. 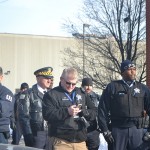 Chicago police guard the entrance to Homan Square, a CPD facility The Guardian reports has been used as an “off the books” interrogation center. 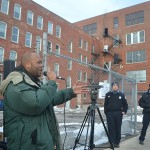 Community organizer Rush Perez addresses the police to his right, ”We are human beings above everything. How can you guys sit here and condone that this inhumanity and this police state go on?” 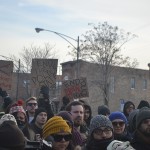 The crowd listens to community organizers just outside the entrance of Homan Square at 1011 South Homan Avenue. 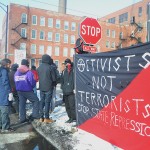 Two protesters hold a banner across the street from Homan Square that reads, “Activists, not terrorists. Stop state repression.” 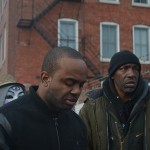 Community organizers reflect on the day’s speeches in front of Homan Square. 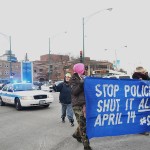 Protesters make their way from Douglas Park to North Lawndale carrying a banner that reads, ”Stop police terror. Shut it all down April 14.”