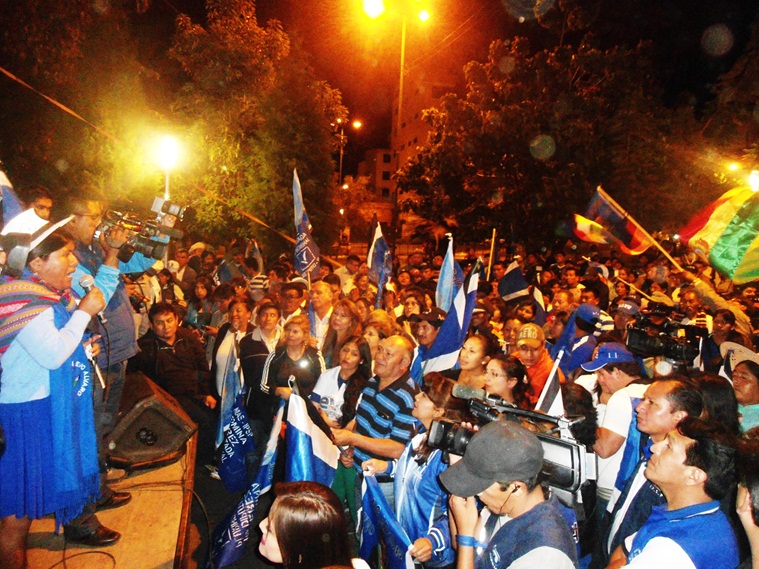 In Bolivia, initial results from the general elections held yesterday indicate President Evo Morales won a third term by a landslide. The legislative races, however, were much more competitive. The the coming days, results will show if the president’s party will once again dominate the Bolivia’s legislative branch for a second consecutive term. Aldo Orellana López has more from Cochabamba.

In Sunday’s elections, President Evo Morales won 60 percent of the vote, far out-pacing the closest opposition candidate by 35 points. This victory gives Morales a mandate through 2020. Morales’ party – Movimiento al Socialismo, or MAS – has also secured a majority of seats in the Senate, but results for the Chamber of Deputies are pending.

MAS party members and supporters took to the streets Sunday night to celebrate the electoral victory. In Cochabamba, Bolivia’s second largest city, tens of thousands rallied outside of the party’s local headquarters.

Juanita Ancieta, leader of Bolivia’s largest organization of campesino women, said the election “deepened democracy” and will benefit the future of the younger generation.

Morales became Bolivia’s first indigenous president in 2006. While his support for an economic model which favors extractive industries has cost him support among some small farmers and indigenous groups in resource-rich areas, Morales continues to enjoy strong electoral support among Bolivia’s indigenous majority.

One of the surprises this election was that Morales beat his closest challenger by more than 10 points in Santa Cruz, a department dominated by wealthy elites which opposed Morales in the early years of his presidency. In recent years, the administration has forged alliances with key businessmen and politicians in the region and economic growth has remained strong.

Morales only lost in one of Bolivia’s nine departments – as states are known in Bolivia.

Shortly after polling results confirmed his electoral victory, Morales gave a speech from the presidential palace, in which he said the real winners were “dignity, unity, and the sovereignty of the Bolivian people.” He dedicated his victory to “the people of Latin America and the world who struggle against capitalism and against imperialism.”

While Morales originally planned to win with 70 percent of the vote, the results sill allow him to governor with relative ease for the coming 5 years. It also will make him the longest-ruling elected leader of Bolivia.

The country’s electoral tribunal will announce official results from the nationwide elections in the coming days.