Police shooting sparks a week of protests and vigils in Ferguson, MO 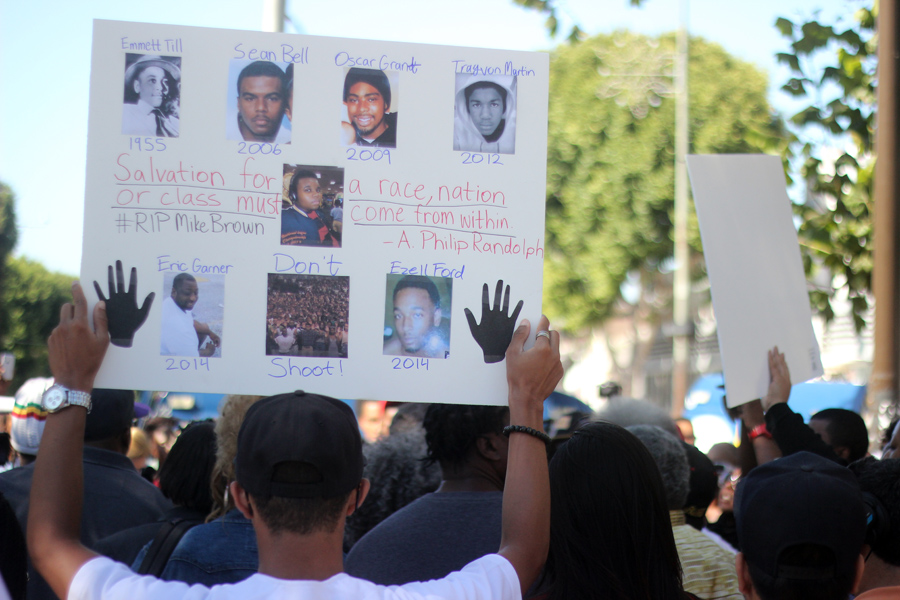 Protests and vigils which started in Ferguson, Missouri after a local police officer shot and killed 18-year-old Michael Brown last weekend turned into a national call for police accountability.

A moment of silence was observed Thursday night in at least 75 cities across the U.S., including Los Angeles, Chicago, Houston and New York, where marches through the city followed the silence.

Michael Brown, an unarmed African-American youth, was reportedly walking in the middle of the street with a friend in a residential neighborhood of Ferguson – a St. Louis suburb – when confronted by an officer in a patrol car. Police say the shooting came after a struggle over the officer’s weapon, but eyewitnesses say Brown had his hands in the air when he was fatally shot.

Almost a full week after the shooting, Friday morning Ferguson Police Chief Thomas Jackson finally released the name of the officer involved in the shooting.

Thomas Jackson: “The officer that was involved in the shooting of Michael Brown was Darren Wilson. He’s been a police officer for six years, has had no disciplinary action taken against him. He was treated for injuries which occurred on Saturday. Again, I won’t be taking any questions at this time, but the packets will be handed out by my officers…”

The media packets handed out at the press conference included documents which suggest Michael Brown was a suspect in the robbery of a convenience store shortly before he was killed. Aside from identifying the officer involved in the shooting, no additional information was given about the status of the investigation into Brown’s death.

The police response to protests on Wednesday drew national criticism after local police arrested two national media journalists and local alderman Antonio French, who spoke to the media upon his release from jail Thursday morning.

Antonio French: “We have a right to peacefully protests 24-hours a day. Our constitutional rights don’t expire at 9 o’clock.”

Alderman French has been providing real time, on-the-scene multimedia coverage of the events in Ferguson via his Twitter account since the protests began. He described how the militarized local police force exacerbated the tension earlier in the week.

Antonio French: “What incited that was the heavy handed police response. When the police started throwing bombs, these young guys start firing and shooting and throwing whatever back. But before they weren’t doing that. And so I think at a peaceful demo is we keep it peaceful. It’s always peaceful until they come with the riot gear.”

Jon Alexander is a St. Louis resident and producer of Project Take Back, an online roundtable discussion space. He told FSRN the situation has united the local community.

Jon Alexander: “I’m actually very proud of the St. Louis community, because we have come together like never before right now. Despite the looting,  which I feel even though there’s nothing good about looting at all, but it’s such a small part of  the big picture, I don’t think people should focus on that. I think the community has come together so strongly.”

The Department of Justice has announced launched a probe into the events surrounding the killing. Attorney General Eric Holder spoke with Brown’s family Thursday and promised a complete civil rights investigation into the matter.

Photo: A protester hold up a sign at a rally in Los Angeles, Aug 14, 2014. Copyright Lena Nozizwe.