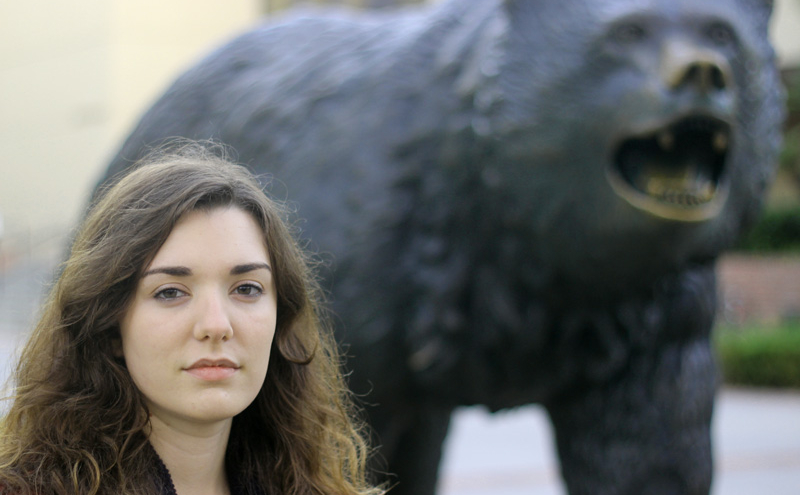 On college campuses from Washington to Florida, from Maine to Southern California university students, faculty and community members took part in a National Day of Action Wednesday against sexual assault. Participants carried mattresses and pillows, expanding on one Columbia University student’s artistic expression about her rape experience and the burden she still carries while her rapist remains free and on campus.

Emma Sulkowicz was raped in 2012 by a man she knew. A university panel found the man not responsible, because Sulkowicz had agreed to sex with him twice before. She tried to file a police report, but found the process so upsetting she was unable to finish. She is of a group of both men and women who have filed a Department of Education complaint against Columbia, saying the university has mishandled gender and sexual assault cases.

As Wednesday’s national day of action demonstrates, the issue of campus-based sexual assault spans the country. California has become the first state to adopt an affirmative consent law, known as “Yes Means Yes” aimed at strengthening the rights of targets of sexual assaults on college campuses. According to the law,  silence or the lack of a “No” from an individual does not mean that she or he has consented to a sexual encounter. That goes for students who are sleeping or intoxicated.

While critics say the law that Governor Jerry Brown signed last month makes sexual relations more complicated, UCLA student Savannah Badalich says it is quite the opposite. The 21-year-old rape survivor is promoting consensual sex through activism, which includes her participation in the White House’s Presidential Task Force on Preventing and Responding to Sexual Violence. She is also the founder of ‎7000 in Solidarity: A Campaign Against Sexual Assault. FSRN’s Lena Nozizwe spoke with Badalich, and began by asking how the law, in a practical sense, will affect the way in which couples interact.

Savannah Badalich: In an actual situation when it sounds like two people are consenting it’s just a lot more verbal cues.  I’ve have done it with or at least talked about it with the students that we have done training s in terms of consent workshops. We make it fun. It’s not as though you go: “Can I do this? Yes you may do this.” It can be very fun in term s of like moaning and enjoying yourself. So the people who say that is ambiguous, the whole point of Yes Means Yes is that there’s no ambiguity whatsoever.

Lena Nozizwe: You were asked for input for a clause in the legislation to have amnesty. It’s called medical amnesty.

Badalich: Many survivors and witnesses to sexual assault, whether before it was happening, or what have you, they, were afraid of coming forward because of sanctions by the university for underage drinking or drinking period through the entire encounter. Somehow they will get in trouble for doing that. Now under it basically gives them amnesty or medical amnesty or so if they report or are witnesses to sexual violence and are helping with a report they will be basically not sanctioned for coming forward. So it is no longer a barrier for reporting.

Nozizwe: You have been public with the fact that you were sexually assaulted and alcohol did have a role. So did that have an impact on you in terms of wanting to talk about it?

Badalich: I mean at the time I did not realize that alcohol was so prevalent in sexual assault cases around campus. You really don’t think about other people’s assaults when you are going through your own. You kind feel alone. So at the time I thought that I was going to be blamed for that and I wasn’t half wrong.

When I talked to my friends or my parents about my own terms not necessarily saying my own name, but talking about my situation, many of the comments that I got were shaming me as to why I was drinking , why I was friendly with anyone period, let alone my perpetrator. And then why like other things, “Why didn’t you close the door? Why didn’t this and that?” They didn’t say my name but they were basically blaming this person who was me. And so with alcohol because of the culture in which we live in with songs like “Blurred Lines” and “Blame it on the Alcohol,” essentially they are making sexual violence with alcohol gray. But by doing that, they don’t realize that there are many survivors on college campuses, most survivors on college campuses who experience this kind of violence with alcohol involved. And by having and perpetuated these kinds of messages they are silencing people.

Nozizwe: Here we are at UCLA if I walk around the campus one in five, just about, of the women that I see have been victims of sexual violence. So can just this legislation have an impact on that?

Badalich: Yes. The one in five women who are experiencing violence this legislation will, yes, will educate many people who are coming and whole generation of new students who are coming into the university.

It may prevent a handful of sexual assaults. But for the vast majority of them they are perpetuated by serial perpetrators who know what they are doing is wrong. So what it really does is it educates their peers. When you educate the peers you are changing the culture on campus from one of silence and stigma to one of healing and support.

What we are hoping to do is by having the peers understand what is going on, when someone comes forward they are not going to be silenced. The first person that you talk to about your assault is more likely to be your friend than an administrator or a police officer. So if your friend does not believe you, why would you go to the criminal justice system? Why would go through the adjudication process at your own university? You’re not going to.

So if we can talk about consent and what isn’t consent and how you can have rights and resources maybe instead of saying, “Well why di d you go out last night?” Why were you wearing that? Why were you drinking?” It can change that to “I’m so sorry you had to go through that. Let’s figure out what we can do.”

Nozizwe: A study that came out from MIT this week indicated that five percent of the victims, the female victims came forward. I have heard even lower number closer to one percent. Do you think Yes Means Yes will have an impact on that, on reporting?

Badalich: Definitely. I think that Yes Means Yes the idea behind it is it’s not, I mean some people think of it as though it is going to legislate consensual sex. It is providing support for survivors who want to go through when it’s non-consensual or rape. And so with that understanding around it many people are going to feel comfortable in going forward to report. Instead of feeling previously that, “Well I didn’t say no because I was really scared,” that could have been used against you, you may not have been able to have a case let along having that person being held responsible.

Nozizwe: It’s a personal decision, but you made the decision not to go forward. Where are you with that right now?

Badalich: I made the decision not to report for different reasons. The initial reason was shame and silence. He had told me the day after I confronted him that no one would believe me and that he was not that kind of guy and which he was kind of right, I mean he was right in that regards. Not that he is not that kind of guy because obviously he was, but his credibility and the fact that he was well-known and respected on campus does not change the fact that he assaulted me, but it would have been a lens by which people would have probably judged me. And at that point in time I did not really want to have his credibility against mine. And by the time I knew what my resources were and I felt empowered to report, I didn’t have evidence.

So a lot of times survivors wait days, weeks, months and sometimes years to report when they finally feel empowered, but they don’t have the evidence anymore. So it becomes a question of if I want to put myself through this because I know a lot of people don’t receive justice anyway even if they do have evidence. And with me my personal justice is this campaign.

I don’t think I am going to find it against him he has graduated. I can put in a police report which I have thought about and I am very much contemplating, but again it won’t do much good for me because I don’t have that evidence anymore. But what I can do is create this campaign which I did do which helps other survivors. So instead of me googling UCLA sexual assault resources and finding nothing come up. When a survivor now looks up UCLA sexual assault resources they have lots of things come up. And that’s my justice, small but hopefully impactful.