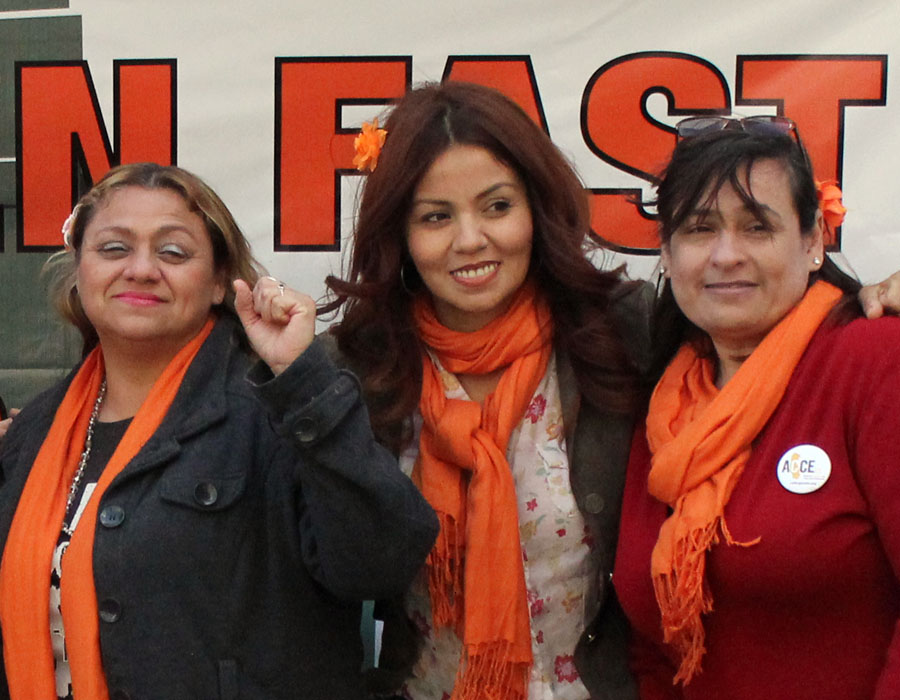 Burger King employee Mary Carmen Farfan, (on left) is one of the women who took part in a 15-day-fast in front of Los Angeles City Hall. (Photo credit: Lena Nozizwe)

A group of women who had been camping out during daylight hours in front of Los Angeles City Hall ended a 15-day fast today with a bread breaking ceremony. Their aim was to get the attention of city council members so that they will vote to raise the local minimum wage to $15.  At least part of their mission was accomplished — three city council members and Mayor Eric Garcetti visited the  encampment to discuss the wage boost.

The hunger strike came on the heels of nationwide demonstrations earlier in the month by some 60,000 union members, fast food and other  low-paid workers who rallied in what the Service Employees International Union, or SEIU,  describes as the biggest demonstration of fast-food workers ever. This fast was a continuation of those protests. FSRN’s Lena Nozizwe has more from Los Angeles.

On Wednesday, the 14th day of the fast, the group of hunger strikers left their white tent on the sidewalk and took their protest across the street and inside the walls of LA City Hall.

With the backing of her fellow fasters, the SEIU and community groups Burger King employee Mary Carmen Farfan told city council members that she fasts to call attention to the challenges of raising a family of four while earning minimum wage.

“We have a struggle to pay rent, bills, to support our kids,” she said from the speakers’ podium. “I have to support my daughter. She is in college right now, but I can’t do that because I have only nine dollars for a minimum wage. Can you imagine how many families struggle how they are going to pay their rent?”

The fast began in front of LA’s City Hall on April 16, a day after low-paid workers – many from the fast food industry – staged nationwide actions to demand a minimum wage hike.

Social worker and hunger strike participant Maneva Currie says sacrificing meals is worth it to focus attention on a cause important to who she calls the 99 percenters.

“Wages have not increased, but everything else has,” Currie says. “Our cost of living has. And the cost of living is getting bigger, bigger and bigger.”

A recent study by the California Housing Partnership, a non-profit that promotes affordable housing, found that most apartments on the rental market in Los Angeles require single income earners to make upwards of $30 an hour.

The local minimum wage in Los Angeles is higher than the minimum rate set by the federal government, but Samuel Homer-Williams, who makes nine dollars an hour after three years on the job at Burger King, says he cannot earn enough to work his way through college.

Congress seems unlikely to raise the federal minimum wage any time soon, so some groups are now focusing on the ability of city governments to hike wages locally.

Consultant Chris Thornberg of Beacon Economics, who was hired by the Los Angeles Chamber of Commerce to study the impact of a higher minimum wage in the city, says boosting it to $15 and hour would not effectively put more money in the pockets of Samuel or his colleagues.

“I can understand why people feel frustrated and feel like it may be a solution, but the problem here stems from the nature Los Angeles as an economy,” he said in a telephone interview. “We have to remember that Los Angeles is a city surrounded by many others directly contacting some 30 some odd cities. And most of these cities have no intention of raising their minimum wage.” He says that means business, and the jobs they provide, will move to surrounding cities with lower labor costs.

Economist Thornberg says more effective approaches would be to rally for affordable housing and to push to change the minimum wage statewide or even federally.

Last fall the city of Los Angeles did vote to raise the wages of employees of the city’s largest hotels to $15.37, more than double the federal minimum wage of $7.25. San Francisco and Seattle have passed measures to increase the local minimum wage to $15 and in Portland, Oregon the city council voted to increase the wages to that level for city workers and contractors.

Those wage increases inspired the hunger strikers who staked a claim in front of LA’s City Hall. They say they believe their fast will hasten the process of raising wages. Even if it doesn’t, it serves as a reminder that sometimes change comes first at the local level.