Slideshow: Solidarity across Mexico with the Ayotzinapa students

Thousands demonstrated in cities across Mexico on Wednesday, October 8, 2014 calling for the return of students from the Ayotzinapa rural teachers’ college and for the punishment of those responsible for the fatal shootings of six people and the abduction of 43 students.

The recent discovery of mass graves near the town where the students disappeared point to systemic corruption and violence in the city of Iguala, and the lack of political will from the state and federal levels to intervene and investigate. Many now point to the situation uncovered in Iguala as indicative of larger systemic problems of corruption and impunity present throughout Mexico. 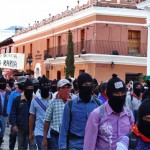 Thousands of Zapatistas came from their communities to support the march in San Cristobal de las Casas. (Photo: Miguelon/ImagenArte) 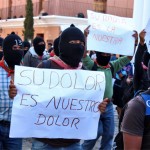 Masked Zapatistas carried signs stating “your pain is our pain” and “your rage is our rage.” (Photo: Miguelon/ImagenArte) 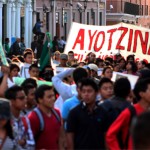 Thousands of residents in San Cristobal de las Casas, Chiapas demonstrated against the killings and disappearances of students from the Ayotzinapa teachers’ college. (Photo: Miguelon/ImagenArte) 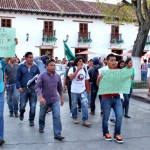 Students participate in the San Cristobal de las Casas march, holding signs that read “We are students, not terrorists” and “Forward, normalistas – the people are with you.” (Photo: Miguelon/ImagenArte) 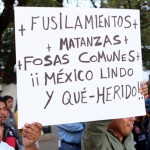 A sign in the San Cristobal de las Casas march alluding to shootings, massacres and common graves in a wounded Mexico. (Photo: Miguelon/ImagenArte) 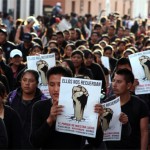 Local students dressed in black for the march. (Photo:Miguelon/ImagenArte) 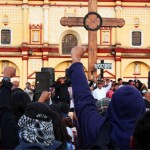 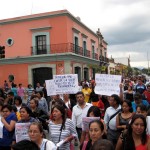 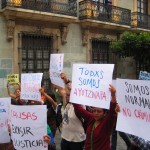 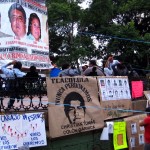 Signs posted around the central kiosk in Oaxaca City’s main plaza include one of a printed portrait of a young man from the nearby town of Tlacolula who is among the missing Ayotzinapa students. (Photo: Vladimir Flores) 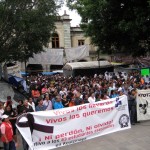 Large banners in the Oaxaca City march read “They were taken away alive, we want them back alive,” and “Ayotzinapa: a state-sponsored crime.” (Photo: Vladimir Flores) 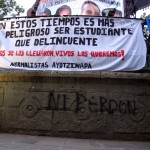 A banner strung up on the kiosk in Oaxaca City reads “These days it’s more dangerous to be a student than a criminal.” (Photo: Vladimir Flores) 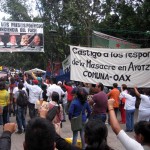 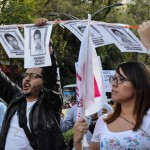 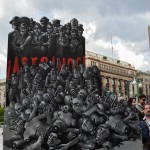 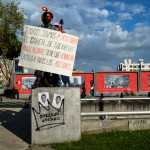 This sign along the Mexico City march route calls for the resignation of Guerrero’s governor and for the punishment of all involved in the killings. (Photo: Andalusia Knoll) 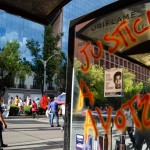 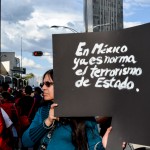 A sign in the Mexico City march reads “In Mexico, state-sponsored terrorism has become the norm.” (Photo: Andalusia Knoll) 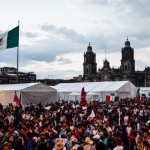