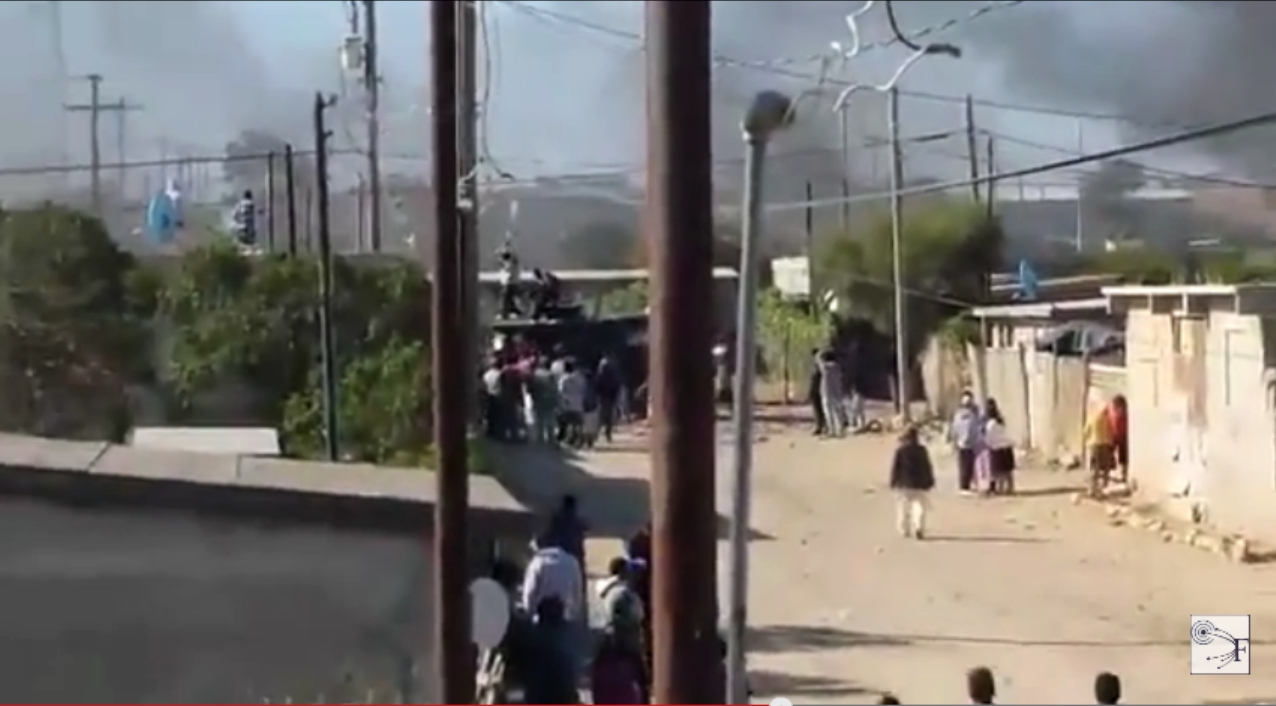 Screenshot of video footage posted to YouTube by Femcai Radio of May 9, 2015 incident in San Quintin.

An ongoing strike by farmworkers at export-oriented megafarms in the Mexican state of Baja California took a tense turn over the weekend. Shannon Young reports.

The Transpeninsular Highway which connects the megafarms of Mexico’s San Quintin Valley with export markets in the U.S. was once again the scene of tense confrontations over the weekend. Police fired rubber bullets at farmworkers, some of whom responded by pelting rocks. Farmworkers told reporters on Saturday that police set off the chain of events by carrying out a violent house raid in a neighborhood dominated by migrant farmworkers from the Triqui region of Oaxaca.

“I wasn’t doing anything but recording what was happening,” said a man in a video posted online by YouTube user Femcai Radio. “They came up to me, grabbed my hand, took my cell phone, threw me to the ground and started beating me on my back as if I were a criminal. I had just gone outside to record. They told me ‘you’re all screwed now, we’re going to kill you all.’ They threatened us like that.”

He adds that police left with his cell phone, which contained video evidence that backs up his version of events.

Since the first day of the strike on March 17th, cell phone footage recorded by farmworkers has played a key role in getting the word out about events in San Quintin, an agricultural hub without much local media.

Three-way negotiations between the workers, farm owners and government representatives have stagnated since the start of the strike. The talks resulted in the offer of a small pay raise equal to about one dollar a day, bringing the going rate for a long day of labor to the equivalent of just under eight dollars. Many have returned to work since then, but strike organizers say it’s more out of financial necessity than due to worker satisfaction with the raise.

A meeting with a high-ranking representative from Mexico’s federal government was canceled at the last minute Friday, fueling a sense of frustration that the government has little interest in enforcing labor laws the farmworkers say are routinely violated. The federal official cited lack of transportation for canceling the meeting, which has been rescheduled for this Wednesday.