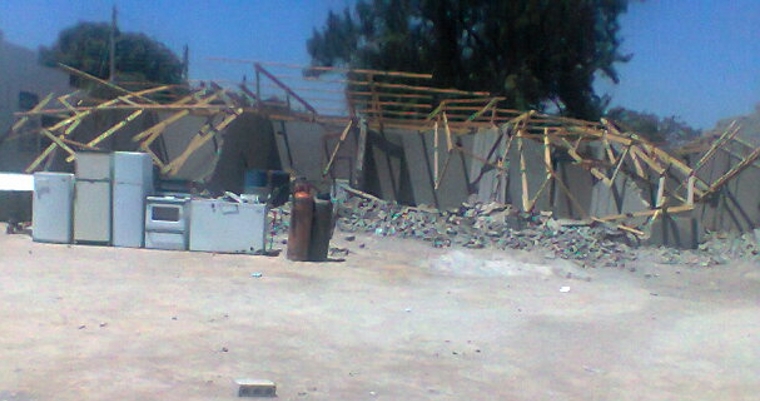 In Zimbabwe, a court has ordered the government to halt a program of evictions and demolitions that has already rendered about three thousand families homeless. As the rainy season approaches, it’s unclear if officials will appeal the decision. Garikai Chaunza reports.

The high court has ordered the government to stop demolishing homes in Harare and Chitungwiza, a bedroom community about fifteen miles southeast of the capital. In his ruling, Justice Nicholas Mathonsi said the demolitions were unlawful, adding that the action was a gross abuse of human rights.

The demolitions began in September, despite the country’s recently-adopted constitution that guarantees every citizen the right to shelter. Residents say their homes were legally built, but officials claim otherwise.

“They demolished my house and all the property inside, beds, kitchen units and other household appliances,” says Peter Makani, a 28-year-old father of two whose house in the Epworth area of Harare was razed. He told FSRN that police, “started firing the tear gas so that people could flee away before they demolish the houses.” Makani says local council officials granted him a residential stand – or approval — to build his house in 2011, and he was surprised to see the same authorities violently evicting his family.

The houses in question were built under electric cables or on areas reserved for recreational facilities and wetlands. Residents say elected officials with the two local authorities granted the land allocations when they were campaigning during last year’s national elections.

Officials have not issued a public statement following the judgment.

But a parliament committee on local government warned Harare against challenging the court verdict.

Committee Chair Irene Zindi says an appeal will fail given that the new constitution requires a court order to evict any citizen. She adds authorities should enforce building code from the start, not “let people go on constructing on undesignated [sic] land and when people have completed and wasted all their hard-earned cash they come and demolish.”

Thomas Marumisa says he lost eight thousand dollars worth of property when his house in Chitungwiza was destroyed. “What happened is very painful. They came and demolished my house without giving any prior notice. After destroying our houses they returned in the evening and started beating up the people whom they had rendered homeless. They indiscriminately tear gassed and beat up children and women. They did that despite being government officials who should be protecting us.”

Using bulldozers and back-hoes, local authorities in Harare and Chitungwiza often carried out the demolitions during the night when residents were asleep.

Zimbabwe has a history of forcible evictions and demolitions. In 1992, the government evicted thousands of villagers from Churu Farm, about twelve miles southwest of the capital. And in the winter of 2005, President Robert Mugabe launched Operation Murambatsvina Restore Order,  which left an estimated one million urban dwellers homeless, earning the country international attention and global condemnation from the United Nations.

A consortium of housing rights groups, the Harare Metropolitan Residents Forum, filed the legal challenge to the current spate of demolitions.

Chairperson Simbarashe Moyo says they are unconstitutional because with the new Bill of Rights, Zimbabweans “now have clear rights, like the right not to be evicted arbitrarily without reasons and without having an alternative place to go.”

Cousin Zilala, the head of Amnesty International Zimbabwe, says the government must be forced to follow international standards when it seeks to relocate communities, otherwise it only fuels the cycle of poverty.

“We have children you have not had access to education since 1992 and they have become parents without education and their children are also going through the same problem,” explained Zilala. “We do not want to see a situation where we have a lot of slum settlements in this country with people without adequate right to housing.”

Although the court ruled that the demolitions be stopped, thousands of people are now homeless – again — and have not been compensated for their losses.  Human rights lawyers say they can still turn to the courts for redress.