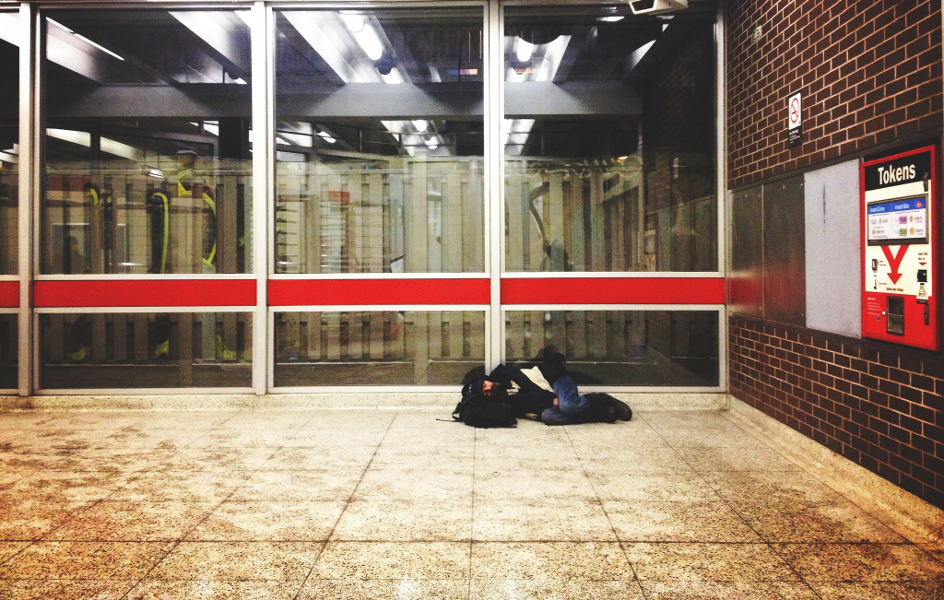 Homelessness exposes those who experience it not only to the elements of severe weather but also to the risk of violent attacks. Some states are considering legislation to prevent crimes targeting homeless people by categorizing such attacks as hate crimes. Other efforts like rolling back so-called “quality of life” laws used selectively against the homeless are more controversial. FSRN’s Larry Buhl has more from Los Angeles.

Last summer in Albuquerque, New Mexico two homeless men were beaten to death in the dusty vacant lot where they camped. As is often the case with violence waged against homeless people, the alleged perpetrators were young men with no apparent motivation other than thrill-seeking. The teens reportedly confessed to around 50 other non-fatal beatings of homeless people.

The killings shocked the community and led to calls for preventative action.

O’Neill’s bill would tack  two years on to the sentence of anyone convicted of a violent crime against a homeless person. He says the bill has the support of the Republican mayor of Albuquerque as well as leaders the Navajo Nation, a powerful legislative force in the state. “My fellow legislators, like many people, don’t understand how homeless people are targeted. Once that’s clear to them, they’re appalled.”

If passed, New Mexico would join Florida, Maine, Maryland and Washington, D.C. in recognizing attacks against homeless and increasing sentences for those crimes.

Advocates say such laws make a statement to the public that homeless lives matter.

But some advocates believe hate crimes laws aren’t enough to protect the homeless from violence. They also want to roll back nuisance laws or “quality of life” laws, which they say are partly to blame for an attitude that homeless people are not only unwelcome, but that their lives are disposable.

“We have this aggressive campaign of criminalizing the presence of certain people in our communities,” says Paul Boden, executive director of the Western Regional Advocacy Project. He compares the aggressive enforcement of nuisance laws to older laws meant to push black people, Oklahomans or anyone deemed undesirable out of public spaces. “The laws have to be written as though they apply to everyone. But the enforcement is only against certain people. And that’s identical with Jim Crow and Anti Okie. And any time local government and local media have aggressively demonized and dehumanized certain segments of our society those people have become targets of hate crimes.”

Anti-Okie laws were Great Depression-era ordinances passed in Western states like California and Arizona which targeted indigent agricultural workers forced to migrate by severe dust storms in the High Plains.

The Los Angeles Community Action Network is working with the Western Regional Advocacy Project to help craft a California homeless bill of rights that would supersede local nuisance laws that target the homeless.

Rhode Island, Illinois and Connecticut have all passed homeless bill of rights laws.

In California, which, along with Florida, reported close to half of all anti-homeless crimes last year, passing a homeless bill of rights has faced an uphill climb. There are two reasons: many residents don’t want homeless people in their neighborhoods and public spaces, and addressing the root cause of homelessness takes money.

California came close to passing a bill of rights last year, but it stalled in appropriations due to the expense of installing public toilets. The coalition behind the legislation of this year’s bill cut out most of those expenses.

Ares says a homeless bill of rights should be a broadly popular step for those who want to end homelessness rather than just move it out of sight: “We’re not going to arrest our way out of homelessness. We can’t give enough jaywalking citations. We can’t give enough littering citations that will solve homelessness. The only way to solve homelessness is with housing. While we’re trying to address the root cause of homelessness, we have to show our legislators that this is not the way, it’s a complete waste of resources. We can be diverting those resources that are right now being applied towards enforcements for  laws that only make it worse for homeless individuals and put that toward housing and put that toward services, towards strategies that actually end homelessness.”

Right now Colorado and Oregon have sponsors for homeless bills of rights. Ares and other advocates in California are still looking for a sponsor for theirs.