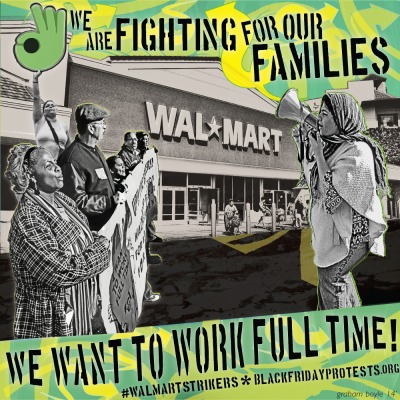 The day after Thanksgiving, or Black Friday, is traditionally the biggest shopping day of the year. In Ferguson and beyond, #BlackOutBlackFriday protesters calling for increased police accountability are joining retail workers and their advocates across the country who are taking the opportunity to make their struggle for workers’ rights more visible.

Workers at Walmart stores across the country walked out Friday and joined storefront protests. Ahead of the actions, Sean Kinane spoke with Angela Williamson from the Organization United for Respect at WalMart – or Our Walmart — an nationwide advocacy organization for WalMart workers leading the walkouts, including one in Tampa, Florida.

Sean Kinane:  Why are you marching on WalMart and why is it going to be Friday?

Angela Williamson:  Workers across the country are going to be taking national action that day. A lot of workers across the country are going on strike so many of them – and we’ll have some out there for Florida, we’ll have some out there at the Dale Mabry (Highway in Tampa) store. And the reason they’re going on strike is because when workers speak out about unfair working conditions whether it’s health and safety issues inside the store or needing more hours — like full time instead of part time – these kind of things, they seem to be retaliated against. Whether it’s cutting their hours back more, isolating them from other workers, terminating them, different things, and so in order to change WalMart – to make it better – these people, the workers need to have a voice and need to be able to tell their stories and try talk to WalMart and let them know what their needs are and how they can change WalMart for the better for their workers.

SK:  There have been some actions recently around the United States. Give our listeners an idea of what happened at those actions and where they’ve been.

AW:  California did an action, I guess last week, workers went on strike out there and they actually did a sit-in action inside of one of the stores. Workers from Sacramento, just different places in California gathered at the Pico Rivera store and did a sit-in and it was just workers that were inside. And they sat for two hours with their signs.

And then Ohio did actions as well. I’m not real clear on what was going on in Ohio since I’ve been so busy, but I do know that they made it into the stores to turn in letters to notify them that they were going on strike and WalMart seemed to be making their own workers leave the property.

SK:  The ones that were on strike, they were forcing them to leave?

AW:   Yes, which is basically what we see here in Florida. This isn’t the first time that workers have went on strike here. It’s their legal right to go on strike against unfair labor practices such as retaliation for speaking out about working conditions. It’s also their federal right to be able to stay on WalMart property and hold signs, as long as they’re not blocking entrances, those kind of things – to handbill. But consistently out here in Tampa as well as other places in Florida, WalMart has consistently made them leave the premises and has went as far as calling the police on the workers and having them threatened with arrest.

SK:   The actions Friday here in Tampa: what do you expect, how many people, about, do you expect to strike and then, where else in the country on Friday do you anticipate these walk-outs?

AW:  So, walk-outs, I don’t have a total list, but I do know that like, Ohio, Dallas, Cincinnati, Chicago, California, Arkansas. There are going to be several different places across the country where workers are going to walk out.

Tampa has always really been good about coming out and supporting WalMart workers. The first strike action we ever pulled out here in front of the Gunn Highway people we had over a hundred people and we’re just hoping that we can pull that on Friday to show these workers some support. Because not only do we have more strikers this year, we have a lot of new strikers, a lot of first-time people that are going out for the first time. They’re scared. WalMart has been holding captive meetings inside the stores, intimidating them not to strike or participate in these actions. So, not only are we asking community to come out, but if there’s any workers out there that are too scared to strike but want to recognize the ones that are standing up for them and speaking out for them, we welcome them to come to the action as well and meet these workers that are standing up for not just themselves, but everybody inside.

SK:  Angela Williamson with Our WalMart, thank you so much for speaking with me today.