Caravans of Ayotzinapa families and supporters travel through Mexico 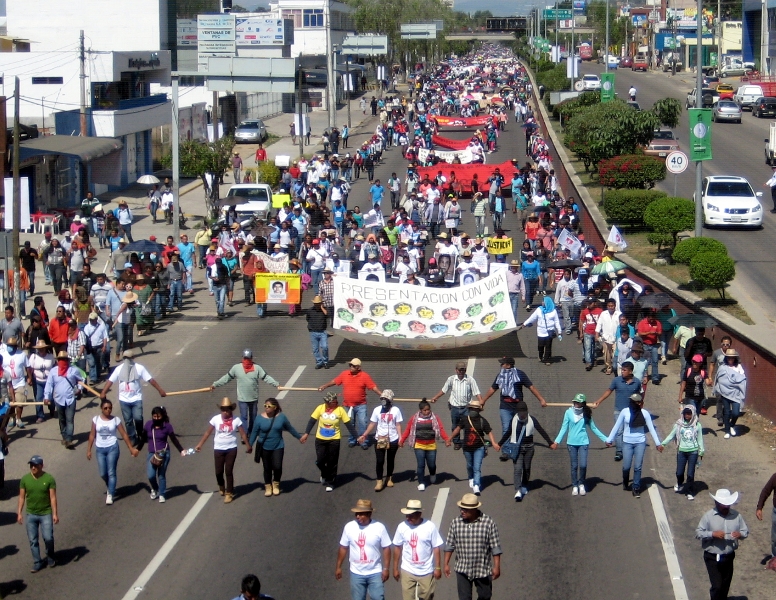 Thousands march in Oaxaca City today with relatives and classmates of the 43 missing students from the Ayotzinapa teachers' college. (Photo credit: Shannon Young)

In southern Mexico, families of more than forty students last seen alive in police custody still do not believe the official line that the young men are all dead. The students were from an all-male teachers college in Ayotzinapa in Guerrero state. Last week, Mexico’s Attorney General revealed that statements by suspects in the case indicate they were all killed the day they were disappeared, reportedly on the order of the local mayor and his wife. But many in the country have deep distrust of the government, and are demanding that the search for their loved ones continue until there is concrete evidence to the contrary.

Now relatives and classmates of dozens of missing students from the Ayotzinapa teachers college are marching through the region. They split up into three different caravans, branching out to share information face to face with supporters in other cities and rally nationwide support. The three groups will meet up later this week in Mexico City. FSRN’s Nell Abram talks with coeditor Shannon Young, who was in Oaxaca City when one of the caravans arrived.