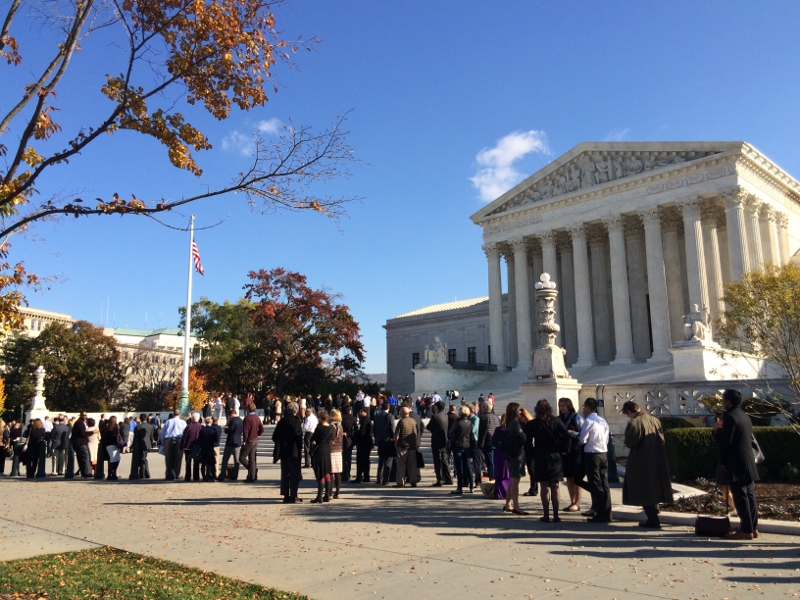 The U.S. Supreme Court heard arguments Wednesday in two consolidated cases that, depending on the outcome, could have a profound impact on how race is used to draw voting district lines in the future.  Ashley Westerman has more from Washington, D.C.

In taking up the case “Alabama Legislative Black Caucus v. Alabama” and “Alabama Democratic Conference v. Alabama,” the Supreme Court will have to answer two questions:

1. When Alabama legislators redrew the state’s voting district lines in 2012, did they abide by the Voting Rights Act?
2. Did they use race in the right way when drawing those new district lines?

Michael Li is the redistricting counsel at the Brennan Center for Justice at New York City University School of Law, which filed an amicus brief in favor of the plaintiffs. He says the state used a policy of keeping all African American-majority districts at the same percentage and “that meant that in some cases you had to draw districts in very different configurations than they had been. And the argument is that was a racial, essentially a racial quota and is unconstitutional.”

The Alabama lawmakers deny imposing a racial quota, saying they were only trying to fall in line with the Voting Rights Act, specifically Section 5 — a provision which calls for a nuanced calculation of race when drawing lines. “Section 5 doesn’t require that the percentages within districts, particularly black voters stay the same,” says Leah Aden, a staff attorney with the NAACP legal defense fund, which also filed an amicus brief in the case. “You also have to look at the natural boundaries of districts, you have to look at people’s ability to vote in precincts and their communities. You have to make sure that you put people into communities where they share interests in common so it makes sense to put them into districts.”

In the courtroom during oral arguments, the justices seemed split. For example, Justice Elena Kagan said “the numbers speak for themselves” in that it sounded like race was a key factor in the voting lines being drawn. However, Chief Justice John Roberts seemed almost sympathetic to states who were trying to find that “sweet spot” between using race as a factor, but not too much.

Supreme Court is likely to rule in one of two ways.

Justin Levitt, a law professor at Loyola University in Los Angeles, says the most narrow ruling would be for the high court to simply use this case to construe Section 5 of the Voting Rights Act. He adds that since Section 5 was ruled unconstitutional last year and Alabama would not have predicted that, the state will probably just have to redraw their district lines.

However, Levitt says the the justices could decide to rule more broadly on the general use of race in determining voting districts. “So part of the question here is, ‘Under what context and what circumstances is it permissible or required for the government to pay attention to race? And when it does pay attention to race, how does it do so?”

According to Levitt, this could have a huge impact on the Voting Rights Act, redistricting and voting in general moving forward. It would also affect many states who have drawn districts the same as Alabama. But it’s difficult to predict how this Supreme Court will rule, as this court has been conflicted about racial gerrymandering issues in the past.

A ruling is expected in June of next year.